A record 700,000 containers are expected on the China-Europe-China route this year

The development of transit from China to Europe through the countries of the Eurasian Economic Union is an important geopolitical and strategic task, as well as good business. 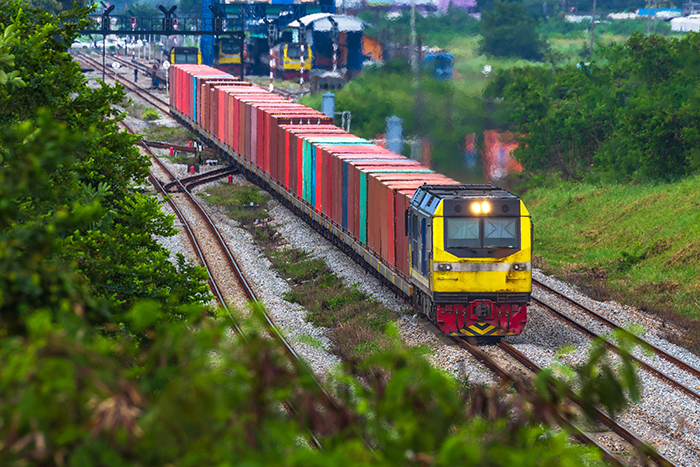 At the end of the year on the China-Europe-China route on the transit corridor through Kazakhstan, Russia and Belarus, it is expected to reach a record figure in container traffic - 700 thousand containers.

“Our main challenge is to drive growth and set a new annual record. We expect that this year it will be close to 700 thousand containers. But at the same time, it is very important to maintain competitiveness, tariff policy, reliability and safety of transportation. We will work on this, ”he said in an interview. Xinhua General Director of United Transport and Logistics Company - Eurasian Railway Alliance JSC Alexey Grom.

He said that in the first half of the year the company transported 336.5 thousand containers, which is 50% more than the same period last year.

“Electronics, engineering products, auto parts are mainly transported from east to west. Among the cargoes from Europe to China in the first half of the year, the dominant products are the chemical industry, plastics, rubber products, rubber and glass products, ”said A. Grom.

He noted that during the difficult period of the pandemic, the all-weather transit of containers retained its competitive advantages - the reliability of delivery and the safety of goods. There was a huge flow of anti-epidemic drugs, tests and medical equipment by rail. For example, the longest route from China to the UK through nine countries delivered a medical cargo in 18 days.

“In order to ensure high-quality processing of the growing volume of traffic, we need to simultaneously develop infrastructure, technologies, and continue to implement digitalization. And, of course, cooperate, communicate, because success depends on the degree of integration - both companies and countries that participate in these transportation, ”A. Grom noted.

He stressed that the development of transit from China to Europe through the countries of the Eurasian Economic Union is an important geopolitical and strategic task, as well as good business. “Countries that develop rail transit, network and infrastructure, in my opinion, are making very serious investments in the future. They will have a multiplier effect in terms of construction, mechanical engineering and information technology, ”explained the CEO.

United Transport and Logistics Company - Eurasian Railway Alliance JSC provides a service for the transportation of containers in the China-Europe route and back through the territories of Kazakhstan, the Russian Federation and Belarus.

Recommended:
Gazprom's net proceeds from gas sales to Europe increased by 93%
Production modernization: CORUM GROUP now repairs electric motors
Turboatom will grow by Electrotyazhmash: Kharkov plants were allowed to unite
On this topic
Russian airlines began flying around Belarus
The China-Europe freight train departs for the first time from the hometown of the discoverer of
In 2020, Ukraine received 22 container trains from China
China has opened a new cargo train.d. the route through Ukraine to Poland
Failure rate: why import substitution failed to meet expectations
Volkswagen: plan to develop electric vehicles in India is tempting, but not yet viable
Partner news
Сomments
Add a comment
Сomments (0)
News Analytics
Free access to data on special permits for the use of subsoil was opened in28-09-2021, 18:27
Zaporozhye iron ore plant modernized crushing and sorting plant28-09-2021, 16:48
The development of industrial parks will allow to completely restart the28-09-2021, 16:19
Ukrainian Foreign Ministry summoned the Hungarian Ambassador over an agreement28-09-2021, 12:43
ArcelorMittal to Build a Billion Euro Waste Blast Furnace in Belgium28-09-2021, 12:16
Oil prices to surpass $ 90 by year end due to shortages - Goldman Sachs27-09-2021, 10:58
Moody's changes its outlook for the mining and metals industry from "positive"14-09-2021, 18:39
European steel prices decline from summer highs and remain stable high04-09-2021, 10:38
Rise in European steel prices to dizzying levels finally fizzled out - Bloomberg27-08-2021, 13:18
Gold continues to be the most efficient portfolio asset - WGC26-08-2021, 12:38
Sign in with: