The line was put into operation on November 26 at the San Giorgio di Nogaro plant in northeastern Italy. The ceremony was attended by representatives of European steel companies, financial institutions, local authorities and the media. 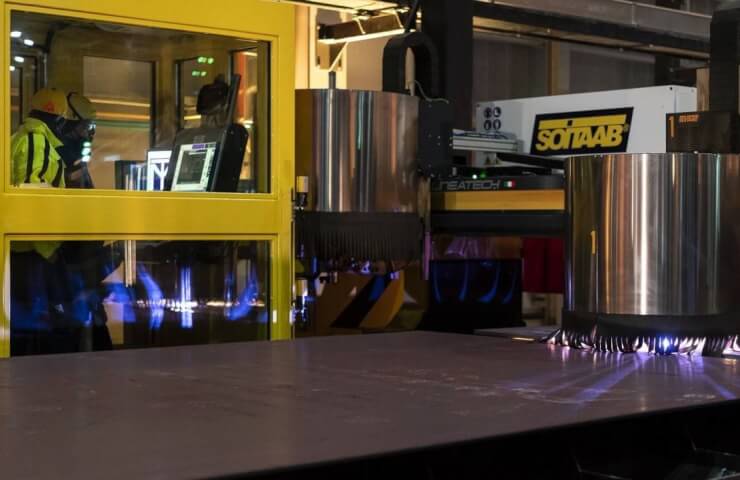 The project is financed under a credit line from Bank of Italy Cassa Depositi e Prestiti S.p.A (“CDP”) approved in June 2020 under the guarantee of SACE S.p.A. ("SACE"), a government export credit agency, as part of the Garanzia Italia initiative.

Installation of a Master Plasma Bevel LineaTech Nova 55 plasma cutting line with an investment of EUR 10 million is a key project of the Metinvest Trametal capital investment program. The line allows to increase the capacity for the production of cut-edge sheet products almost fourfold - from 65,000 tons to 235,000 tons per year. For its installation, a new building with a total area of ​​6,800 square meters was built at the enterprise. The launch of the new line will create 16 new jobs.

The line was put into operation on November 26 at the San Giorgio di Nogaro plant in northeastern Italy. The ceremony was attended by representatives of European steel companies, financial institutions, local authorities and the media. They were able to see how the funds from the credit line were used to develop the production of value-added products, as well as how these investments stimulate the local economy both during the construction phase and through the creation of additional jobs with permanent employment.

Metinvest Group acquired Trametal in 2008. The productivity of the four-high reversing mill (“quarto” mill) of the enterprise is 600 thousand tons of high-quality hot-rolled sheet products per year. The products are used in shipbuilding, pipe industry and other industries. In 2020, Metinvest Trametal supplied rental for the construction of St. George's Bridge, a new sustainable structure designed by the architect Renzo Piano. The bridge connected the two parts of Genoa after the tragic collapse of the Morandi Bridge. In 2021, the Financial Times included Metinvest Trametal in the list of 300 climate leaders in Europe who achieved the largest reduction in greenhouse gas emissions in 2014-2019. The company employs 300 people.

Финансовая аналитика, прогнозы цен на сталь, железную руду, уголь и другие сырьевые товары. More news and analytics on Metallurgprom telegram channel - subscribe to get up-to-date market information and price forecasts faster than others.
Сomments
Add a comment
Сomments (0)
On this topic
Metinvest Trametal has attracted funding for the modernization of their assets
CDP: steel industry will not be able to reduce CO2 emissions
Metinvest has taken out a loan to Finance the oxygen complex on the boiler. Ilyich
Metinvest begins construction of an air separation unit at the Ilyich Steel Plant
In Italy we can nationalize ArcelorMittal plant
Metinvest, together with the Rinat Akhmetov and Vadim Novinskoy Foundations, donated 3,200 COVID-19
Recommended:
Metallurgical plant "Zaporizhstal" has mastered the production of a new type of cold-rolled steel
POSCO starts supplying steel for hyperloop pipes in the Netherlands
US suspends 25% duty on steel imports from Ukraine for a year
News Analytics
The largest producer of titanium raw materials in Ukraine OGCC will sell25-05-2022, 20:48
Glencore accused of bribery in London pleads guilty in the US25-05-2022, 10:44
Swiss oil and gas equipment manufacturer Sulzer leaves Russia24-05-2022, 13:08
BIR: European Commission's decision on scrap metal will be the most tragic24-05-2022, 11:41
Rejection of Russian palladium destroys markets24-05-2022, 11:41
US steel market sentiment becomes more price neutral05-05-2022, 10:15
The global high-strength steel market will grow steadily by 5% annually for the04-05-2022, 08:45
China steel inventories hit 13-month high amid COVID-19 outbreak30-04-2022, 16:38
Slowdown in global auto sector affects steel prices27-04-2022, 12:36
World alumina production reaches a record 138 million tons21-04-2022, 09:54
Sign in with: