Ukroboronprom and Ukrspetsexport signed a cooperation agreement with EDGE Group

This Agreement was signed during the official visit of the President of Ukraine to the United Arab Emirates and was approved by His Majesty Sheikh Mohammed bin Zayed Al Nahyan. 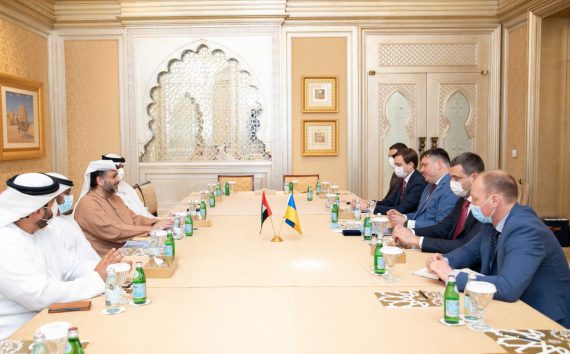 On Sunday, February 14, within the framework of the visit of President of Ukraine Volodymyr Zelenskyy to the United Arab Emirates, an agreement was signed between the state concern Ukroboronprom, the state company Ukrspetsexport and the holding of the defense industry EDGE Group to expand military-technical cooperation. p>

The signing took place in Abu Dhabi with the participation of Ukroboronprom CEO Yuri Gusev, Ukrspetsexport CEO Vadim Nozdri and EDGE Group Managing Director Faisal Al Bannaya. The agreement will facilitate the exchange and development of advanced technologies by the three parties, with the prospect of investments worth more than $ 1 billion.

“This strategic agreement is the result of our collaboration with the EDGE Group and a significant step in joint development and collaboration between the parties. It is very symbolic that this Agreement was signed today during the official visit of the President of Ukraine to the United Arab Emirates and was approved by His Majesty Sheikh Mohammed bin Zayed Al Nahyan for quick implementation, "the head of the concern said.

In turn, Faisal Al Bannaya stressed that EDGE has high hopes for further partnership with the Ukrainian side.

“The signing of this tripartite agreement demonstrates our commitment to partnering with leading international defense companies. We are delighted with the opportunities that open up for the UAE and Ukraine for cooperation, exchange and mutual benefit from the military and technical potential of the two countries, "he said.

Vadim Nozdrya noted that Ukrspetsexport is proud to be a part of this strategic deal with EDGE Group: “We offer the best technologies available in Ukraine and promising joint development programs.

EDGE Group is the leading military-industrial innovation holding in the UAE. It unites more than 25 enterprises, 13,000 best specialists in five main clusters: platforms and systems; missiles and weapons; cyber defense; electronic warfare and reconnaissance and support of military missions. One of the world's top 25 military corporations (SIPRI).

Recommended:
Vadim Novinsky was informed about corruption schemes in strategic energy companies
European Metallurgical Association Eurofer Seeks Restrictions on Scrap Metal Exports
Dnieper Metallurgical Plant DCH Steel in April reduced steel production by 2.8%
On this topic
Interpipe and DTEK signed agreements with the UAE State Investment Fund
"Ukroboronprom" introduces to "Antonov" Supervisory Board
Ukroboronprom signed a framework agreement for fuel supplies without tenders
IRENA: hydropower will be critical to decarbonize the economy
Yuzhmash told whether it is possible to launch reusable rockets from the Black Sea
The Minister of energy and the environmental protection of Ukraine Alexey Orzel went to the Emirates
Add a comment
Сomments (0)
News Analytics
China's Non-Ferrous Metals Sector Records High First Quarter Profits08-05-2021, 15:43
Copper price rises to a record high08-05-2021, 10:17
Dneprotyazhmash manufactures technological equipment for DMK07-05-2021, 10:07
The National Bank of Ukraine will sell 46 tons of scrap metal from obsolete07-05-2021, 10:10
Dnieper Metallurgical Plant DCH Steel in April reduced steel production by 2.8%07-05-2021, 09:18
The current state of the market is ideal for the sale of rolled steel - IREPAS04-05-2021, 18:41
Global hydrogen demand to grow 7-fold by 2070 - PwC21-04-2021, 12:31
World Steel Association predicts a good year for metallurgists15-04-2021, 18:19
World Steel Association defines green steel and its variations12-04-2021, 13:14
China unlikely to cut steel capacity in 2021 due to high steel prices07-04-2021, 12:11
Sign in with: