The elusive Cybertruck Tesla was captured on drone footage on Friday during a test drive at the company's Fremont, California plant 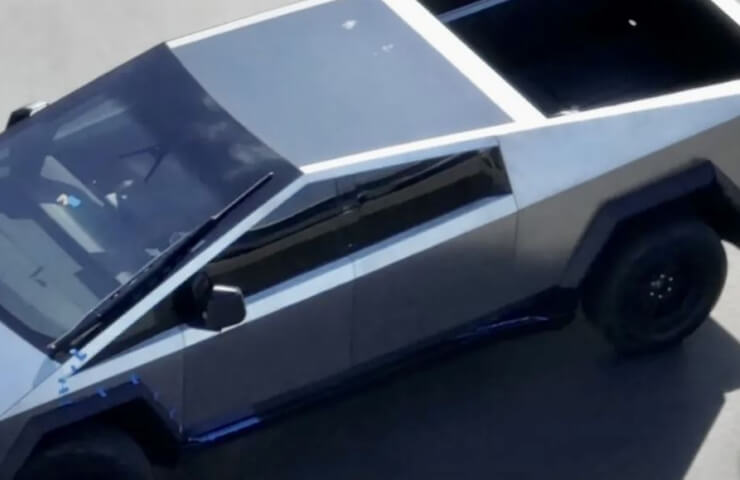 Tesla Cybertruck production will begin by the end of 2022, and only in 2023 will Elon Musk's company be able to establish it. Meanwhile, the American automaker is working to improve its new electric pickup truck. There are known to be differences, both in terms of aesthetics and content, compared to the original prototype shown in 2019.

The elusive Cybertruck Tesla was captured on drone footage on Friday during a test drive at the company's factory in Fremont, California. Those hoping for a truly futuristic design were a little disappointed, as the prototype car was equipped with some all too familiar devices: side mirrors and a windshield wiper.

From the images of Cybertruck extrapolated from the video show, it appears that Tesla has changed optical groups. In addition, the front and rear bumpers are structurally different from the original prototype shown during the 2019 presentation.

Social media users rushed to ridicule the windshield wiper, calling it "comically large", and this did not escape the attention of Elon Musk, who, instead of defending Cybertruck, admitted that "the wiper is what worries [him] most of all. ”

Tesla CEO said he sees no "easy solution" to the problem. " A fold-out wiper that retracts into the front of the trunk, which Musk sees as the ideal alternative, would admittedly be too "complicated." “However, the company is working on an electromagnetic wiper for the Cybertruck. As for the side mirrors, car manufacturers are legally prohibited from removing them, Musk said. However, future owners are free to "modify their vehicles."

But since actual production is just around the corner, there have been a number of compromises that some might see as departing from the original idiosyncratic design. Some other notable changes include a more rounded front end and a new set of headlights.

According to Tesla's website, the all-electric, battery-powered truck is a "near-impenetrable exoskeleton" designed for "maximum durability and occupant protection." “The Cybertruck also has bulletproof glass, although during the presentation of the car in 2019, the prototype's windows shattered when a metal ball was thrown at them. Tesla later explained that the base of the glass had already been damaged in a previous crash test with a sledgehammer hitting the door. Aside from these concerns, some safety experts have warned that the rugged exterior of the Cybertruck could pose a greater risk to pedestrians in the event of a collision with a vehicle.