The project for the purchase of 130 French electric locomotives is part of the macro-financial support package of the French Republic for Ukraine, which includes, among other things, targeted concessional lending. Thanks to this, Ukraine will be able to renew the fleet of freight electric locomotives in the near future. 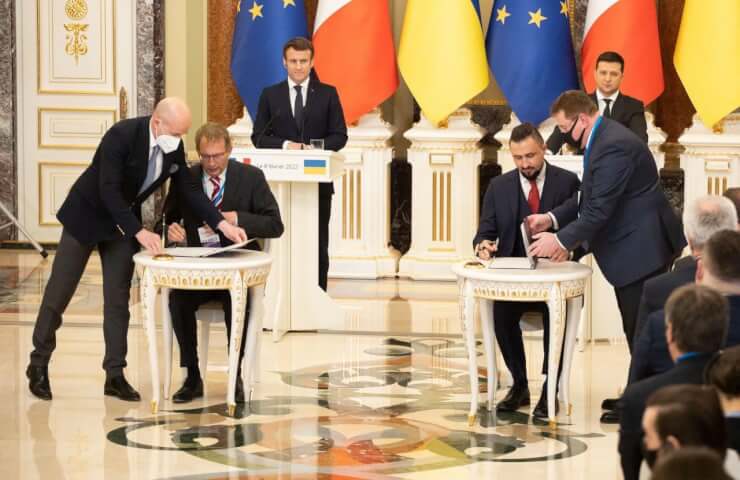 Today, in the presence of President of Ukraine Volodymyr Zelensky and President of France Emmanuel Macron, a protocol on cooperation was signed, fixing the key agreements between the companies. The protocol for a total amount of 900 million euros was signed by the head of the board of JSC "Ukrzaliznytsia" Alexander Kamyshin and CEO of Alstom Henri Popart-Lafarge.

“The signed agreement will allow us to receive much-needed electric locomotives at the best possible conditions in today's turbulent times. The use of Ukrainian companies and specialists in the construction and maintenance of machines will also bring a unique experience in Ukraine. There is still a lot of work to be done to discuss the technical details, but most of the negotiations are over,” said Alexander Kamyshin.

Negotiations on this agreement began in 2018, lasted three years and ended last year with the signing of the relevant intergovernmental agreement. Also, the law “On ratification of the Framework Agreement between the Government of Ukraine and the Government of the French Republic regarding the official support for the renewal of the fleet of freight electric locomotives of the joint-stock company “Ukrainian Railway” No. 1607-ІХ was adopted, which was supported by the Verkhovna Rada on July 1, 2021.

The protocol provides for unique conditions for deliveries, in particular, the provision of a financial loan for 14 years by the French Treasury and a banking consortium in the amount of 85% of the contract value. The advance payment for the supply of electric locomotives is 15%.

“This is not just an agreement on the supply of locomotives – this is the integration of Ukraine into the economic system and transport network of the European Union,” said Minister of Infrastructure Oleksandr Kubrakov.

An agreement on the supply of 370 units of fire and rescue equipment from the French company Desautel SAS to Ukraine for 300 million euros was also finalized today. Thus, Emmanuel Macron took to France contracts totaling 1.2 billion euros. In addition, Ukraine and France will continue to develop cooperation with Airbus to create a national air carrier.

Финансовая аналитика, прогнозы цен на сталь, железную руду, уголь и другие сырьевые товары. More news and analytics on Metallurgprom telegram channel - subscribe to get up-to-date market information and price forecasts faster than others.
Сomments
Add a comment
Сomments (0)
On this topic
Railways in 2020 will buy the 40 locomotives General Electric
In 2021, Ukrzaliznytsia plans to repair more than 300 locomotives for UAH 4 billion
The French agreed to localize 35% of the production of Alstom electric locomotives in Ukraine
Ukrzaliznytsia will acquire 130 new freight electric locomotives from the French company
Ukrzaliznytsia will spend about 5 billion hryvnia in 2021 on repairs of diesel locomotives
Hydrogen trains in Austria received approval for operation on passenger lines
Recommended:
Metinvest reduced the use of its capacities by more than 40% due to the war in Ukraine
Russian lead production plants are on the verge of closing due to a complete halt in exports
Zaporizhstal: production results in June 2022
News Analytics
The United States refused to impose duties on Russian metals and increase02-07-2022, 09:05
Daimler Truck began testing Actros tractor on liquid hydrogen02-07-2022, 08:54
Volvo invests $1.25 billion to build electric vehicle plant in Slovakia01-07-2022, 18:17
Swedish court authorizes construction of steel mill for the first time in 5001-07-2022, 11:09
AvtoVAZ plans to produce at least 400,000 vehicles in 202301-07-2022, 11:29
High iron ore shortage could halt metallurgy's green transition28-06-2022, 14:02
Price volatility hits global steel market27-06-2022, 19:28
Recovery in China could be key to rising global steel prices - MEPS24-06-2022, 14:00
Conflict in Ukraine spurs Europe's drive for clean energy03-06-2022, 12:14
US steel market sentiment becomes more price neutral05-05-2022, 10:15
Sign in with: