France and Ukraine have finalized contracts for the supply of 130 locomotives to Alstom in the amount of 900 million euros. One of the announced conditions of the memorandum is the localization of at least 35% of production in Ukraine. 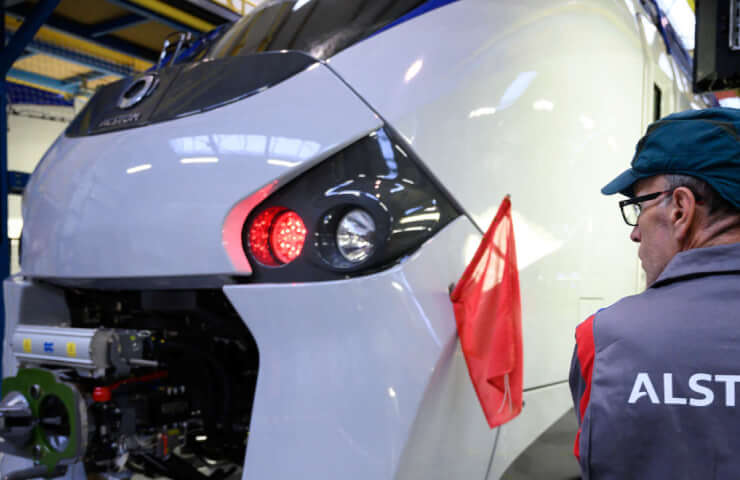 The Ukrainian Union of Industrialists and Entrepreneurs (USPP) doubts France's promises to localize 35% of the production of Alstom railway locomotives in Ukraine. This is stated in the USPP press release.

“Under pressure from domestic business circles, including USPP, a norm on 35% localization of production was announced. But there are still no technical and economic calculations, certification programs, etc., any specific activity for this figure. Therefore, there is a threat of banal non-compliance with this paragraph. Recall that the law on localization in mechanical engineering (No. 3739) was adopted the day before, but it was emasculated precisely in terms of non-distribution of its norms to manufacturers from the EU and the USA,” the USPP said.

This is not the first billion-dollar contract that could be localized in Ukraine against the backdrop of its own similar production, suffering from a lack of orders and funding. Six months ago, Ukraine announced a loan of 500 million euros for the purchase of Swiss Stadler trains. The corresponding memorandum was signed by the Ukrainian government members, Ukrzaliznytsia, Stadler and the Swiss agency SERV.

According to industrialists, the situation in Ukrainian engineering needs a clearer state policy. Over the past year, the production of freight cars in the country fell by 26%. A little more than 2.4 thousand units were produced, and 2 years ago this figure was 10 thousand. The capacities of the key machine-building plants of Ukraine will be enough to fulfill orders from the state and the railway (if there is timely funding).

“We need a clear program for the renewal of rolling stock for the medium term with resource support based on public-private partnerships. The concept has long been developed together with the business community, and was presented to the government in the fall of 2021. More concrete actions of officials are needed," President of the USPP Anatoly Kinakh emphasized.

The business union believes that in the conditions of the economic crisis, it is necessary to look for driver industries that provide maximum jobs, employment, and industrial development. These are car building, the aviation industry, and in the future, rocket science. Of these, only one program for the aircraft industry until 2030 was adopted, however, it did not receive funding in the 2022 budget either.

“The level of localization in the domestic car building industry is over 90%. This is an area where we can and should develop. Therefore, contracts with foreign partners should provide for production on the territory of Ukraine, the exchange of experience and technology. Otherwise, billions of euros will go to filling the budgets of other countries, creating jobs abroad. If we fully implemented the profile industry program, this would give a multiplier effect for the economy + 5-7% of GDP, more than 100 thousand new jobs,” Anatoly Kinakh said.

USPP notes that Ukraine has not made any progress in recent years in implementing the policy of import substitution, localization of production (except for one law), accelerated adaptation of European technical regulations and standards. Therefore, business circles propose to strengthen the interaction of industrialists with the head of government and the president. The associations have already worked out their proposals, including those on minimizing the negative impact of a jump in energy prices, high industrial inflation, lack of access to credit resources, etc.

Финансовая аналитика, прогнозы цен на сталь, железную руду, уголь и другие сырьевые товары. More news and analytics on Metallurgprom telegram channel - subscribe to get up-to-date market information and price forecasts faster than others.
Сomments
Add a comment
Сomments (0)
On this topic
Law on localization in machine building of Ukraine does not apply to the US and the EU - USPP
The French agreed to localize 35% of the production of Alstom electric locomotives in Ukraine
Ukrainian Union of Industrialists and Entrepreneurs demands to adopt a shipbuilding strategy
Entrepreneurs agree with Ukrzaliznytsya an action plan to continue modernization
The European Union has opposed the adoption of Ukraine's law on localization of production
The Bogdan Motors team appealed to the People's Deputies of Ukraine
Recommended:
UK faces sharp rise in steel and timber prices in March
Grain harvest in Ukraine in 2022 will be reduced by 34% - forecast from Alfa-Bank Ukraine
Explosion at Tata Steel plant in India at coke battery
News Analytics
The largest producer of titanium raw materials in Ukraine OGCC will sell25-05-2022, 20:48
Glencore accused of bribery in London pleads guilty in the US25-05-2022, 10:44
Swiss oil and gas equipment manufacturer Sulzer leaves Russia24-05-2022, 13:08
BIR: European Commission's decision on scrap metal will be the most tragic24-05-2022, 11:41
Rejection of Russian palladium destroys markets24-05-2022, 11:41
US steel market sentiment becomes more price neutral05-05-2022, 10:15
The global high-strength steel market will grow steadily by 5% annually for the04-05-2022, 08:45
China steel inventories hit 13-month high amid COVID-19 outbreak30-04-2022, 16:38
Slowdown in global auto sector affects steel prices27-04-2022, 12:36
World alumina production reaches a record 138 million tons21-04-2022, 09:54
Sign in with: