The produced iron ore concentrate is shipped by Yuzhny GOK by rail to Europe. Meanwhile, the shipment of marketable products to Asia and North Africa has been suspended. 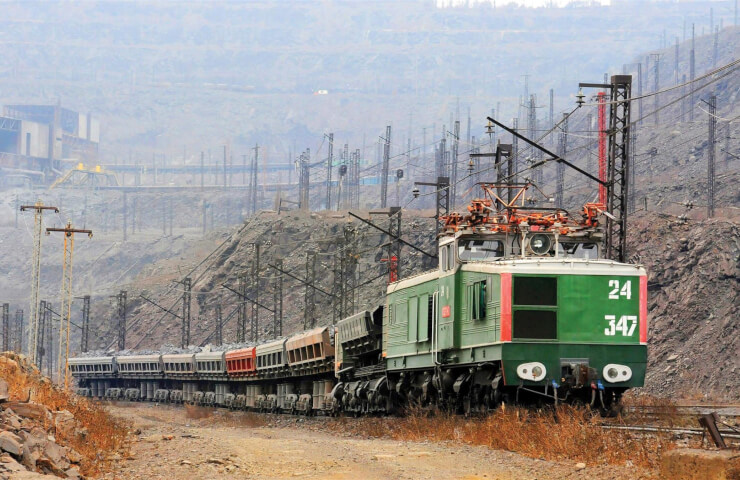 The Southern Mining and Processing Plant (GOK) of the Metinvest group of Rinat Akhmetov and Vadim Novinsky was reorganized to work in wartime conditions. According to the press service of the company, the plant is fully fulfilling the March plan for the production of iron ore concentrate. The production facilities of the enterprise are provided with electricity, fuel, lubricants and consumables.

The mining department of the Southern Combine works stably. On March 16, a controlled mass explosion was carried out in the quarry - the first since the beginning of the war. The volume of rock mass prepared for excavation is 350 thousand cubic meters.

Southern GOK continues the reconstruction of technological sections No. 9-10 of ore processing plant No. 2. At the end of February, specialists completed the first stage of dismantling work in the enrichment building. In March, the contractor is building a vacuum pumping station.

At the end of February, there was a shortage of fuel, balls for mills, and filter cloth at the Southern Combine. Difficulties arose due to violations of logistics from Kyiv, Kharkov and Mariupol. The supply of inventory items necessary for production is gradually resumed.

The produced iron ore concentrate is shipped by Yuzhny GOK by rail to Europe. Meanwhile, the shipment of marketable products to Asia and North Africa has been suspended. The problem is related to the blockade of the Black Sea by the Russian Navy.

“Southern GOK continues to function confidently in wartime conditions. First of all, this is the result of the cohesion of the entire team of our enterprise. Each employee is fully aware that the future of the plant depends on their work today. I am proud of the team of like-minded people and I am sure that with our work every day we bring closer the victory of Ukraine over the enemy,” says Konstantin Fedin, General Director of the Southern GOK

Despite the austerity of finances, YuGOK pays wages to employees in full. The personnel of the enterprise received an advance payment for the days worked since the beginning of March. The money was received on the bank account of the workers within the period established by the legislation of Ukraine.

Southern GOK continues professional training of employees. Classes are held to train drilling rig operators, filter operators, conveyor operators and other professions. Educational courses are taught by trainers of the personnel training and development department of the enterprise.

The social sphere of the Southern Mining and Processing Plant is operating stably. All workers canteens and buffets of the plant are open. Service buses deliver personnel from home to the enterprise from all districts of Krivoy Rog.

Yuzhny GOK is one of the main producers of iron ore raw materials in Ukraine - iron ore concentrate. The raw material base of the plant is made up of quartzites from the Skelevatsky deposit, located in the central part of the Krivoy Rog iron ore basin.

YUGOK is controlled by Metinvest Group and Lanebrook Ltd. (previously the majority shareholder of the Evraz Group, in 2018 withdrew from the shareholders of the group), which at the end of 2007 acquired a 50% stake in YuGOK from the Privat group (Dnepr).

Финансовая аналитика, прогнозы цен на сталь, железную руду, уголь и другие сырьевые товары. More news and analytics on Metallurgprom telegram channel - subscribe to get up-to-date market information and price forecasts faster than others.
Сomments
Add a comment
Сomments (0)
On this topic
KZhRK miners' strike threatens with loss of sales markets without prospects of their return
Southern ore in 2019 has maintained production of iron ore concentrate at a level of 2018
Yuzhny GOK closed the sinter shop due to lack of demand, will build a pelletizing plant for the
In October of 2019 southern GOK increased its concentrate production by 7%
The southern GOK in the beginning of the year reduced production GRC 8.2%
The fall in steel production at the plants of Metinvest in the 4th quarter 2019 exceeded 16%
Recommended:
China's Hainan Province to ban internal combustion engines by 2030
EU Commission not doing enough to save aluminum industry - associations
Deere invests billions in self-driving tractors
News Analytics
EU plans additional sanctions against Russian metallurgy27-09-2022, 10:34
The European Commission has approved 5.2 billion euros of state support for27-09-2022, 10:43
China's leading industrial profits fall 2.1% in first 8 months27-09-2022, 10:20
Moody's changed the outlook for the global mining industry to26-09-2022, 19:04
Russia may increase taxation of oil, gas, coal and fertilizers26-09-2022, 15:58
China production cuts in winter will give limited boost to steel markets -15-09-2022, 10:09
Steel prices may rise as manufacturers stop production11-09-2022, 14:06
IREPAS: The global long products market is in a "dramatic situation"10-09-2022, 20:49
Steel prices are unlikely to rise significantly in the near future - analysts02-09-2022, 22:58
Steel prices may move up on new data from China31-08-2022, 12:19
Sign in with: