to implement plans For electrification need to make some legislative acts, which "walk" across the Parliament for several years. 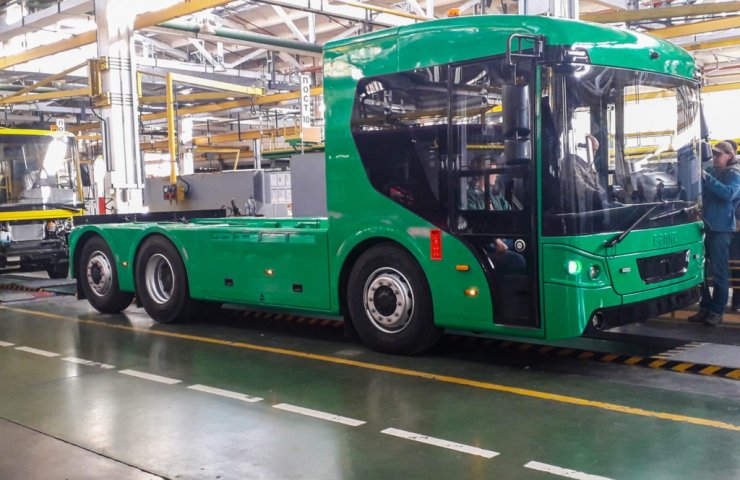 the Need of using environmentally friendly transport in Ukraine due to global trends of transition to electric vehicles the country's ecological situation. According to the world health organization, Ukraine ranks first in the world (!) The mortality rate from air pollution per 100 thousand people. The macroeconomic losses from environmental pollution by motor transport in Ukraine is estimated at the equivalent of 2.5 billion euros annually. This situation is caused, in particular, a large number of emissions from motor vehicles, because the average age of Park of passenger cars in Ukraine - 22.2 years, and it is twice more than in the EU (11.1 years).

Ukraine has a production capacity to manufacture vehicles, components and accessories for motor vehicles, in addition, there are highly qualified personnel. All these factors contribute to opportunities for using Ukraine as a production site for electric vehicles.

"Given that the capacity for a full cycle of production of buses, trucks and SKD cars are used by only 10%, the government and Parliament of Ukraine, it would be appropriate to adopt measures to improve the situation in the industry and the investment attractiveness of the country as a whole", - stated in the Corporation "Bogdan".

European countries are taking measures on state support of development of electric transport, in particular through the adoption of relevant legislation that annually allows significantly reduce the consumption of products of the oil refining industry and improve the ecological condition. The gradual replacement of vehicles with electric cars in big cities and industrial regions with high population density, becomes inevitable. According to Bloomberg in 2025 the share of electric cars on the market will amount to 10-15%, and in 2030 will reach 35-40%.

In the Verkhovna Rada of the previous convocation have already been registered relevant bills to support the production of electric vehicles.

"unfortunately, the package of laws on electric initially came under selective disfavor with the parliamentarians of the previous convocation, and for over a year though, and was offered eight times in the agenda of sessions of the Verkhovna Rada, but the real consideration and implementation and has not received. But the import of finished electric vehicles received unexpectedly enthusiastic support. Therefore, the sale of cars was not the priority of Ukrainian legislators, and the development of its own industry, creating new jobs and left behind", - reported in the Corporation.

In "Bogdan" expressed hope for constructive dialogue with the government concerning the development of electric mobility strategy and prompt legislative regulation of the investment attractiveness of the industry.

"the New composition of the Verkhovna Rada of Ukraine had the opportunity to go down in history of the country adopting the laws, because as of this moment we are still in the beginning progress, while the leading countries have long moved forward," - concluded the Corporation.

Финансовая аналитика, прогнозы цен на сталь, железную руду, уголь и другие сырьевые товары. More news and analytics on Metallurgprom telegram channel - subscribe to get up-to-date market information and price forecasts faster than others.
Сomments
Add a comment
Сomments (0)
On this topic
Employees of the Nissan plant in Barcelona lit candles on their jobs (Video)
The steel industry, the United States recognized itself the most energy efficient in the world
Ukraine accepted the offer of the Mask on the free ventilators
Korean auto makers will switch to hydrogen engines with help from Chinese steelmakers
Volvo engineers dropped 10 new rescue vehicles from 30m height (Video)
Metinvest begins construction of an air separation unit at the Ilyich Steel Plant
Recommended:
The European Council added the violation of restrictive measures (sanctions) to the list of EU crimes
Mining enterprises of Ukraine reduced the export of iron ore by 38.9%
The European Union has sharply increased purchases of Russian titanium
News Analytics
Analysts predict 5% annual growth in the iron casting market through 203006-12-2022, 12:44
Oman to build a new steel plant worth $3 billion in 3 years06-12-2022, 12:14
Tesla's Shanghai gigafactory set a new record for electric vehicle shipments in05-12-2022, 15:24
Sanjeev Gupta may lose control of his steel plants in Belgium05-12-2022, 13:55
Steel demand and weather in Australia will affect coking coal prices05-12-2022, 13:16
Analysts predict 5% annual growth in the iron casting market through 203006-12-2022, 12:44
Commodity prices will fall, metals quotes will rise slightly - Focus Economics28-11-2022, 13:28
Platinum market to face shortage next year - WPIC22-11-2022, 18:25
Global steel demand falls and will fall by 2.3% in 2022: WorldSteel19-10-2022, 23:12
Iron ore prices fall to 11-month low15-10-2022, 10:36
Sign in with: