The main advantage of the terminal is the speed of delivery of goods to final recipients. 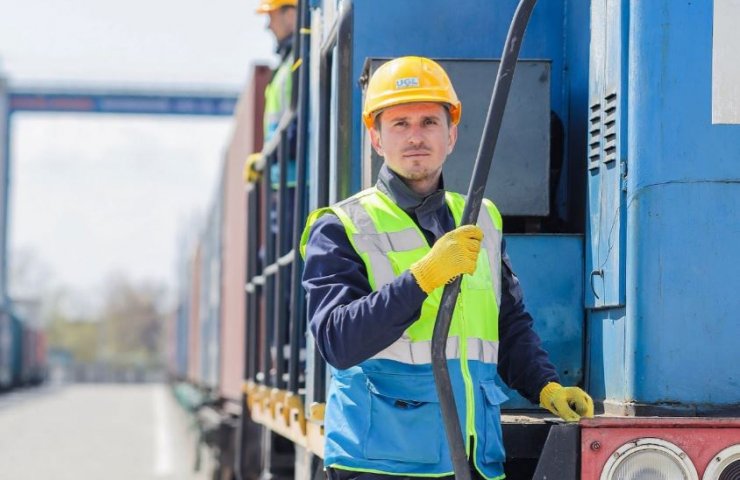 A new container terminal began operating in Zaporozhye, which connected the industrial center of Ukraine with the three largest ports of Odessa and made it possible to speed up logistics on this route by 3-4 times. The new hub was launched by United Global Logistics, the largest multimodal transport operator.

The container hub " Terminal Zaporizhzhia " covers an area of ​​60 thousand square meters meters and can simultaneously accommodate 1400 TEU (equivalent to a 20 'container).

In the near future - arrangement of a warehouse with conditions for storing refrigerated containers.

Specialized handling equipment with a lifting capacity from 1.5 to 45 tons, including forklift trucks, stackers and RTGs, as well as a conveyor loader designed for loading bulk and bulk cargo into containers. The above-mentioned transshipment equipment allows handling the entire range of cargo flows transshipped at the "Terminal Zaporozhye".

The service that United Global Logistics offers to clients is a full range of freight forwarding services, customs clearance of goods, chartering of ships and services for storage of goods in a warehouse. The terminal operates around the clock, seven days a week.

The main advantage of the terminal is the speed of delivery of goods to final recipients. The standard travel time for a group and a single train from Zaporozhye to Odessa is at least 5-7 days (in some cases - up to ten), while a container train, the route of which connects the terminal with the main ports of Big Odessa (TIS, Container Terminal Odessa "," Brooklyn-Kiev Port ") and" Black Sea Fishing Port ", takes no more than 30 hours.

In addition, United Global Logistics delivers large-tonnage containers to the ports of Greater Odessa, which allows them to be loaded to their maximum carrying capacity and avoid fines on the roads for overloading, as is the case with the delivery of containers by road.

The advantage of this delivery method is also in a good environmental component: instead of hundreds of trucks, a railway train runs. Such delivery significantly reduces the amount of harmful emissions into the atmosphere, does not overload the roads and excludes the likelihood of an accident on public roads. At the same time, containers arriving at ports by rail have a number of additional advantages in relation to road transport, namely: a higher rate of supply of rolling stock to the processing fronts, a greater intensity of cargo operations, as well as the absence of additional charges (before entering the port ) and sometimes a long wait for permission to enter (time-slotting, busy port roads, etc.).

As for transportation by road, the terminal is connected with the highways of international importance M18, M14 and M04.

In addition to the ports of Greater Odessa, United Global Logistics is actively developing the delivery of goods to Central Asia: Kazakhstan, Turkmenistan, - by mixed modes of transport (road, rail, sea).

The company carried out the dispatch of goods in the western direction - to the point Mostitskaya-Chop with further transportation along the internal railways of the European Union.

The main principle and strength of United Global Logistics is the synergy of the benefits of sea transportation with its own railway transport. This combination allows opera

Финансовая аналитика, прогнозы цен на сталь, железную руду, уголь и другие сырьевые товары. More news and analytics on Metallurgprom telegram channel - subscribe to get up-to-date market information and price forecasts faster than others.
Сomments
Add a comment
Сomments (0)
On this topic
"Naftogaz" has filed a lawsuit against the government of Ukraine for the issuance of a
Sea container transportations in Ukraine has grown by 20 percent exceeding million TEU
Ukrzaliznytsia developing a strategy for the development of multimodal transport
"Metinvest " with affiliated companies became the owner of 100% of "Zaporozhogneupor
The ship Ever Given, which blocked the Suez Canal, again entered the route from Asia to Europe
Ukrgasvydobuvannya will buy two thousand tons of steel pipes in Uruguay
Recommended:
For 8 months of 2022, steel production in Ukraine fell by 64.5%, to 5.2 million tons
UK steel production hits record low this year
ThyssenKrupp invests 2 billion euros in the construction of Europe's largest DRI plant
News Analytics
British Steel owner asks government for financial support05-10-2022, 13:05
The price of gold crossed the mark of 1700 dollars05-10-2022, 13:28
US coal prices top $20004-10-2022, 10:16
Tata Steel merger plan to secure long-term profits03-10-2022, 10:46
US hydrogen prices to drop to zero dollars per kg in 5 to 6 years: Platts02-10-2022, 21:53
China production cuts in winter will give limited boost to steel markets -15-09-2022, 10:09
Steel prices may rise as manufacturers stop production11-09-2022, 14:06
IREPAS: The global long products market is in a "dramatic situation"10-09-2022, 20:49
Steel prices are unlikely to rise significantly in the near future - analysts02-09-2022, 22:58
Steel prices may move up on new data from China31-08-2022, 12:19
Sign in with: