China imposes sanctions against a number of non-governmental organizations, including Human Rights Watch, in response to the adoption by Washington of the law "On the protection of human rights and democracy in Hong Kong". 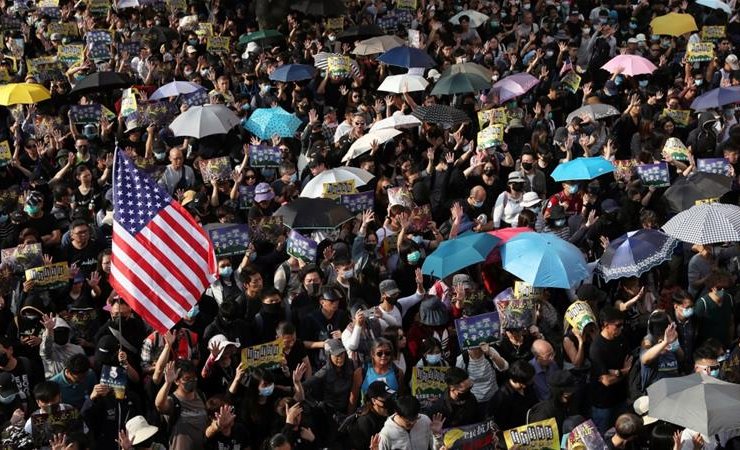 "Recently, the United States adopted the law "On the protection of human rights and democracy in Hong Kong", ignoring the protest of China, this was a serious violation of international law and basic norms of international relations, as well as interference in the internal Affairs of China, Beijing in this regard, expressed its strong protest. In response, China decided to impose sanctions against a number of American nongovernmental organizations, including NDI, HRW, Freedom House," - said at a briefing on Monday, the official representative of the Chinese foreign Ministry Hua Chunying.

these measures Beijing proved that HRW supports the protesters in Hong Kong.

the Chinese Government has also suspended processing of applications "American ships" on the entry of Hong Kong, also said the Agency.

Informed the US President Donald trump has signed two laws relating to Hong Kong "On the protection of human rights and democracy in Hong Kong" and ban the supply in the special administrative region of certain police equipment. Documents adjust the law on US policy in respect of Hong Kong from 1992 and assume an annual review of trade relations with Hong Kong depending on the degree of autonomy, as well as sanctions against individuals Washington deems responsible for the violation of human rights in the administrative district.

in addition, China arrested a citizen of Belize because he allegedly colluded with people in the United States to intervene in the Affairs of Hong Kong, the official newspaper of the Communist party of Guangdong, citing local authorities.

Lee Henley, Hu Xiang, a businessman from Belize living in China, funded by key members of the "hostile forces" in the United States to undermine the national security of China, and supported the actions that led to chaos in Hong Kong, according to Southern Daily.

Recommended:
Ukraine has overtaken the United States in production of iron and came in ninth place in the world
Dneprovskiy metallurgical plant has restarted another rolling mill
AK "Bogdan motors" is ready to increase the localization of production of trolleybuses in Ukraine up to 50%
On this topic
The Minister of Economics of Germany has stated that free access to the Internet is one of basic
The members of the Majlis of Iran resigned after a rise in gasoline prices
The Bundestag adopted the amendments to the Gas Directive for Nord stream 2
Япония и Южная Корея рассорились окончательно
Сталелитейный сектор Китая может рассчитывать только на сектор недвижимости
Рост производства стали в Китае удивил аналитиков
Add a comment
Сomments (0)
News Analytics
Strategy of defense in space07-07-2020, 10:49
AVTOVAZ predicts the fall of the Russian car market by 20-25%06-07-2020, 16:52
Novokramatorsky Mashinostroitelny Zavod re-entered the market of coke chemical06-07-2020, 16:50
DMK exceeded the plan of sales in June, shipping of metal less than a year ago06-07-2020, 16:35
Metinvest announced the final stage of negotiations on the loan of 62 million06-07-2020, 14:52
Steel prices in southern Europe are rising, despite weak demand23-06-2020, 10:54
Analysts expect strong demand growth for steel in China10-06-2020, 11:57
Global steel consumption in 2020 will be reduced by 6.4% - Worldsteel04-06-2020, 13:53
American steelmakers are faced with an unexpected problem associated with the14-05-2020, 09:09
Relying on the incentives, Chinese steelmakers increase production30-04-2020, 10:20
Sign in with: