Ashgabat entered the Guinness Book of Records for the number of buildings faced with white marble. 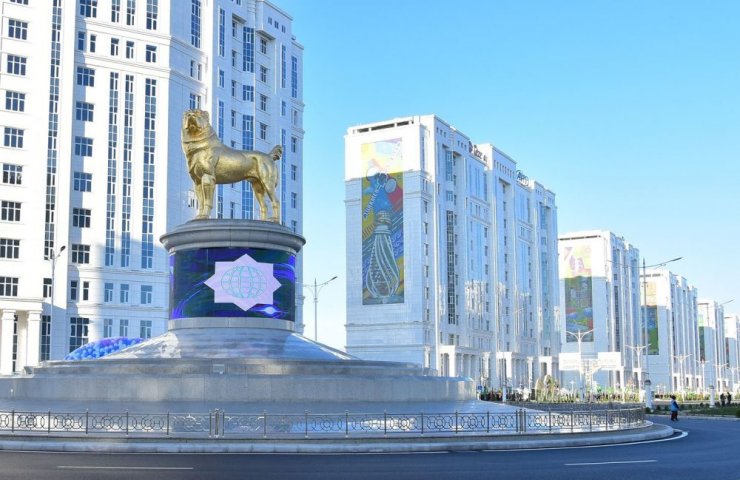 President of Turkmenistan Gurbanguly Berdimuhamedov solemnly unveiled a monument to Alabai, a giant gilded statue of the Central Asian Shepherd Dog bred by the Turkmens and a symbol of Turkmen national pride.

Along with horses, dogs are considered part of the country's national heritage and are widely used by local shepherds to graze sheep. Berdymukhamedov, 63, wrote a book and a poem about the Alabai dog, and in 2017 presented Russian President Vladimir Putin with a puppy of this breed for his birthday. In 2019, Berdymukhamedov made the same gift to Dmitry Medvedev.

The 15-meter-high golden dog statue is the latest addition to Ashgabat's growing collection of monuments and complements the gilded statue of President Berdymukhamedov himself, perched on a horse on a white marble cliff, built at another major intersection in 2015.

Over the years of his reign, the President of Turkmenistan has initiated major construction in the capital, which showcases her with golden domes, giant golden statues and white marble buildings. The city is listed in the Guinness Book of Records for the highest density of white marble buildings in the world, and Berdymukhamedov's portrait hangs on many of them.

Other projects include a $ 2.3 billion bird-shaped airport and the $ 5 billion Olympic Village built for the Asian Indoor Games.

At the same time, the population of Turkmenistan is faced with hyperinflation and food shortages. The economy of Turkmenistan, which relies on the country's vast gas reserves, is now in the grip of its worst economic crisis and on the brink of collapse, in part due to low gas prices and falling natural gas exports.

Information from the former Soviet republic, considered one of the most repressive states in the world by Human Rights Watch and the Turkmen Initiative for Human Rights, is under strict control. According to the independent watchdog group Freedom House, there are no independent media outlets and most foreign websites have been blocked.

It is interesting that not a single case of Covid-19 has been officially registered in Turkmenistan - this is one of the very few countries in the world that live with such statistics.

Recommended:
Anti-union repression intensifies in Belarus - Trade union of metallurgists and miners of Ukraine
Poland supports introduction of carbon tax at EU borders
The Association of the Extractive Industries of Ukraine declared injustice in the bill
On this topic
Yuzhmash told whether it is possible to launch reusable rockets from the Black Sea
Alexander Yaroslavsky intimated to the President of Ukraine he is ready to redeem "Electrotyazhmash"
US sanctions can stop the construction of the "Nord stream – 2" in the waters of Denmark - Bild
Ukraine extended year special duty on Russian goods
Gas as a weapon of Russia's hybrid war: how to deal with it?
Indian gold imports in April-February fell 5.5 percent
Add a comment
Сomments (0)
News Analytics
Coronavirus drove Belgian skiers to the slopes of the Charleroi waste heap07-03-2021, 13:52
US Steel focuses on the production of nanosteel for high-strength alloys07-03-2021, 13:46
Poland could lead the race in hydrogen steel technology07-03-2021, 11:29
US Senate Adopts $ 1.9 Trillion Stimulus Package06-03-2021, 23:54
Tibet invests about $ 30 billion in infrastructure projects in 5 years06-03-2021, 14:39
Spread between raw materials and high strength alloy steel in Europe increased01-03-2021, 20:21
Increase in prices is forecasted in the markets of steel raw materials -26-02-2021, 09:25
Troy ounce of gold will drop $ 500 in two years - Fitch25-02-2021, 18:29
Global iron ore production growth to outstrip cumulative production in India23-02-2021, 10:22
Fitch Ratings Warns of “Shocking Impact” on Fossil Fuel Exporters18-02-2021, 14:44
Sign in with: