The Nikolaev aluminous plant announced that forced the suspension of production

Customs blocked the importation of imported bauxite raw material on the territory of Ukraine, which led to a critical reduction of reserves of bauxite in the plant and could eventually lead to the complete destruction of industry in the country, declared in NGZ. 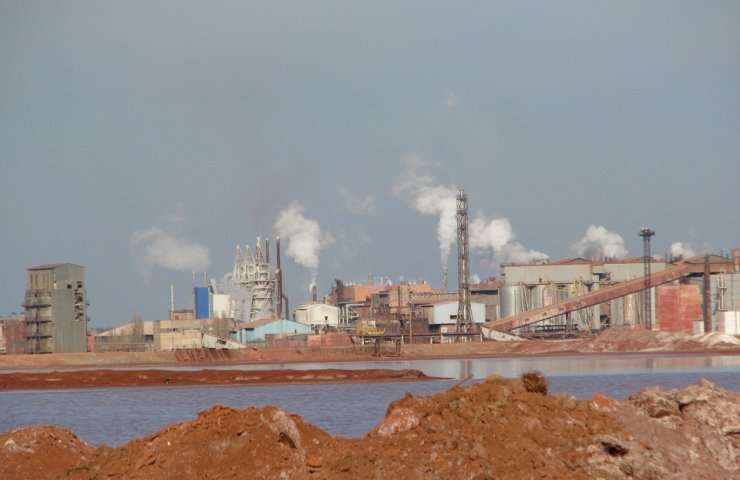 the Nikolaev aluminous factory (NGZ) announced that forced the suspension of proceedings in connection with "the unlawful blocking of revenue bauxite raw material in the black sea port customs".

At the plant remains critical to the possible future implementation of normal activities, the volume of bauxite, which provides 4-day work production. During a three-day supply of plant technological standards required to make preservation, therefore, from the 30th of April will begin with a stop of the enterprise.

the company claimed that NHP conducts its activities in full compliance with the current legislation of Ukraine.

"the Importation of raw materials into the customs territory of Ukraine for processing are exempt from customs duties under the Customs code of Ukraine (Chapter 23), as the plant provides services for refining, and 100% of its production goes outside the country in connection with the absence in Ukraine of consumers of alumina. Despite this, headed by A. Shuckin the leadership of the black sea customs, in violation of the court's decision prevents the importation of imported bauxite raw material on the territory of Ukraine, which led to a critical reduction of reserves of bauxite in the plant and could eventually lead to the complete destruction of industry in the country", - reads the statement of the alumina plant.

NGZ turned on April 28 with a letter to the President of the country Vladimir Zelensky containing a request to assist in the settlement of the situation in the legal field, but at the moment the answer is received.

Earlier, the head of the black customs reported violations of NGZ and hiding the enterprise in the process. In particular, in an interview with RBC-Ukraine it is reported that the Nikolaev district administrative court blocks ban customs, and strongly protects NGZ. Furthermore, with NGZ, the beneficiary of which is the Russian oligarch Oleg Deripaska, is a violation of the technological process, the uncontrolled movement of waste red mud for its own storage and delivery during the war of strategic raw materials to the enterprises of aggressor States.

According to him, today the number of red slime on the territory of the Nikolaev area is huge and the company is obliged to dispose of it. In connection with a number of violations, customs initiated audit NGZ. Customs also filed relevant documents in the NAB, for fact-checking, which helps to minimize payments to the budget for the past ten years. If Nicholas the court will continue to block decisions of the black sea customs, there are going to appeal and go to the Odessa court concluded Sucky, according to the Agency.

it was reported that Russian businessman Oleg Deripaska, against whom the USA imposed sanctions, was also included in the Ukrainian sanctions list approved by the Council of national security and defense Council (NSDC).

it was reported that in 2017 the transaction, approved by the government of Ukraine, control over NGZ acquired the Swiss company Glenсore, which is one of the world's largest suppliers of commodities and rare earth materials. The Antimonopoly Committee of Ukraine gave permission for transactions, noting that, provided the right concentration, which resulted in the group Glenсore will be included in the capital of foreign companies "of Gordel holdings A. V. V." and "Gandala international A. V. V." (both in Aruba), who are members of the OOO "Company "Aluminium of Ukraine" and "Guardon Ukraine" (both - Kiev), which directly own 13,96% and 86,04% of shares in NGZ, respectively.

In October of 2016 Ukraine has imposed sanctions against OK "RUSAL" and the associated company Judson Trading Limited (Cyprus). Among the restrictive measures on the freezing of assets - temporary restriction of a person's right to use and dispose of its property, restrictions on trading in Ukraine, restrictions on withdrawal of capital from the country, stop the implementation of economic and filobasidiella. Among them also - the prohibition of procurement of certain goods and services, full or partial ban on transactions with securities of persons placed under sanctions, and the prohibition of NBU for the implementation of several payments.

OK, "RUSAL" was established in 2007 with the merger of the aluminium and alumina assets of OJSC"RUSAL", "SUAL" and Swiss trader Glencore.

"RUSAL" in Ukraine owns about 29% in the Zaporozhye aluminum combine (ZALK), of 68.01% of the shares in which are returned to the state. "RUSAL" challenges the return of shares to the state at the International centre for settlement of investment disputes.

it was Also reported that Deripaska remains the ultimate beneficiary, OOO "NGZ", according to the Unified state register of legal entities.

According to the state register, Oleg Deripaska beneficiary of two co-NGZ – OOO "Company "Aluminium of Ukraine" and "Guardon Ukraine".

the Nikolaev aluminous plant was built in 1980 year and is one of the largest enterprises of Ukraine. The plant is the largest employer and taxpayer in the Nikolaev area. Today the company, which employs about 3500 employees, working on the basis of technology, a leading technology provider in the aluminium industry, the French company Aluminium Pechiney, when in the processing of bauxite is formed of alumina and red mud. By this technology most of the alumina plants in the world – in America, Europe, Australia, China: Alcoa, Worsley, Alunorte, Chalco, Norsk Hydro, etc. the company is constantly implementing programmes of environmental modernization and expansion of production capacity. As a result of investment projects, the plant today produces more than 1.7 million tonnes of alumina per year, increasing in 1, 7 times the original amount.

Recommended:
ArcelorMittal Kryvyi Rih purchased a new drilling rig Epiroc DM75 D
All Porsche cars will soon be electric except the Porsche 911 - Oliver Bloom
Zaporizhstal awarded scholarships to Zaporizhzhya athletes
On this topic
Police detained the head of a coal mine in the Lviv region for "kickbacks"
Companies from Qatar and Ukraine declared about the participation in the concession tender in Porto
Ukraine detensive the scrap metal market in the spring
The Eurasian Commission has announced the final amount of duties on Ukrainian zinc
Gas production division of Naftogaz of Ukraine transferred UAH 1 billion in rent payments to the
Heating season in Ukraine: where there can be problems with heat and why
Add a comment
Сomments (0)
News Analytics
Georgia's economy shrinks by 11.5% in January26-02-2021, 21:21
Ukraine retained its position in the world ranking of steel producers and rose26-02-2021, 15:52
ArcelorMittal has raised prices for galvanizing for the European market to 90026-02-2021, 13:23
The European Commission initiated a new investigation on steel imports to26-02-2021, 13:22
A rally of workers of the stopped shipyard was held in Mariupol26-02-2021, 12:34
Increase in prices is forecasted in the markets of steel raw materials -26-02-2021, 09:25
Troy ounce of gold will drop $ 500 in two years - Fitch25-02-2021, 18:29
Global iron ore production growth to outstrip cumulative production in India23-02-2021, 10:22
Fitch Ratings Warns of “Shocking Impact” on Fossil Fuel Exporters18-02-2021, 14:44
Raw material prices rise by about 10.5% in January 2021 - Deutsche Industriebank12-02-2021, 10:48
Sign in with: