Directly involved in the overhaul took about 300 contractors LLC "Industrial Ukraine" and LLC "Metinvest-Promservis", which coped with its task efficiently and in accordance with the schedule. 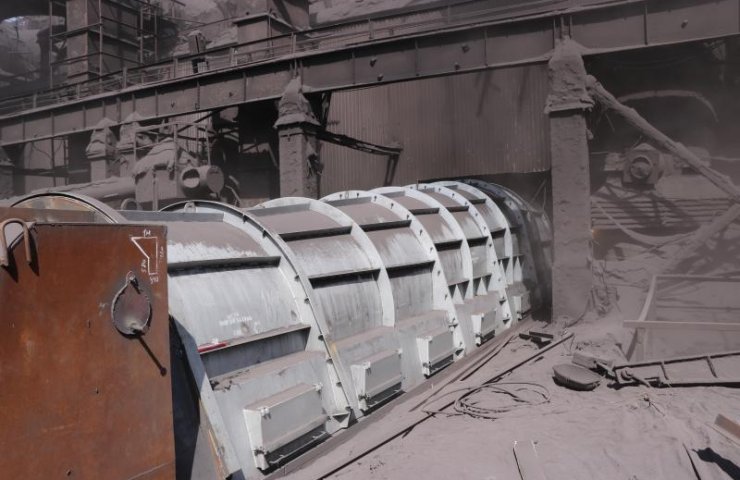 the sinter plant of the PJSC "Dneprovsky" (MQM) ended a 45-day capital repair of sinter machine No. 10. Investments in capital repairs amounted to 80 million. Currently, the complex of commissioning of the installed equipment.

the Main purpose of the overhaul was the solution of environmental problems - reduction of dust emissions into the environment in the production of sinter. This was upgraded the battery of the cyclone of the machine, carrying out the flue gas cleaning from abrasive dust - the main source of harmful emissions into the atmosphere.

we have Installed new pollution control equipment and an increased number of treatment elements is mounted 540 810 so-called swirlers, where the dust under the pressure of the air is directed into the water and then in the form of a slurry waste is pumped to the storage pond.

has Undergone repair and cooling zone of the sinter machine, where there is a partial filtering of gases from dust and flow into the battery cyclone for further treatment.

Also, during the overhaul was planned to replace the shelter working side of the sintering machine, which allows you to hold the dust and transfer it into the battery cyclone, was also a package of measures to reduce pollution of the atmosphere.

revision and replacement of a number of major mechanical components of the unit, performed works on replacement of the vacuum chambers and gas, spasatelnyj trucks.

"a large-Scale renovation is over, while we have begun start-up activities, the results of which eliminate the revealed remarks. After the renovation, the machine will work stably, providing the company agglomerate. The number of releases to the environment will be reduced significantly, which will allow us to adhere to the environmental standards of production."

Recommended:
ArcelorMittal Kryviy Rih reduced semi-annual steel production by 10%
Alexander Yaroslavsky intimated to the President of Ukraine he is ready to redeem "Electrotyazhmash"
ArcelorMittal Kryvyi Rih invests $ 700 million in environmental related projects
On this topic
"ArcelorMittal Kryvyi Rih" has completed the overhaul of casting machine No. 4 blast furnace shop №
DMK is investing 110 million in a capital repair of sinter machine
Dust emissions have been reduced at the Dnieper Metallurgical Plant
On the Dnieper metallurgical plant completed the repairs of CCM-1
Experts confirmed the high level of environmental safety of the pond-evaporator plant in utlyukskom
Zaporozhye NPP specialists save their coolers from Amazonian shells
Add a comment
Сomments (0)
News Analytics
"Metinvest " in May increased revenue by 13.6% versus April, debt increased by04-08-2020, 18:49
Metinvest's Kryvyi Rih GOKs will pay double taxes to the local budget until01-08-2020, 14:16
US Steel will not restart blast furnaces in Indiana until the end of this year01-08-2020, 14:02
ThyssenKrupp closed the deal for the sale of the elevator business01-08-2020, 13:53
Minister for Strategic Industries of Ukraine inspected YUZHMASH workshops31-07-2020, 09:49
Steel begins to lose the battle with the aluminium due to the growing27-07-2020, 17:08
Gold may reach a record high in 201114-07-2020, 12:47
Steel prices in southern Europe are rising, despite weak demand23-06-2020, 10:54
Analysts expect strong demand growth for steel in China10-06-2020, 11:57
Global steel consumption in 2020 will be reduced by 6.4% - Worldsteel04-06-2020, 13:53
Sign in with: