To improve and fundamentally change the technology in order to extend the life of the equipment and minimize the intake of water from the Dnieper River - this is the goal of the DMK. 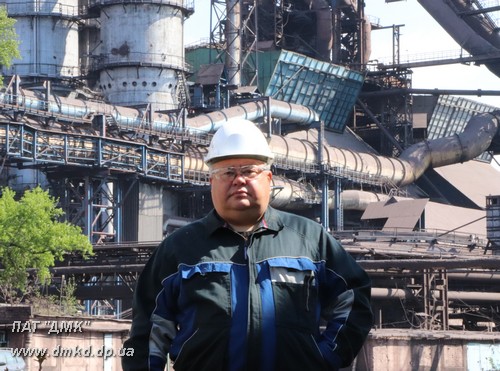 At the Dnieper Metallurgical Plant (DMK), it is planned to implement a project for the reconstruction of blast furnaces No. 9 and No. 1M. The DMK published the relevant documents about its intentions for the reconstruction, and developed a draft environmental impact assessment (EIA). Currently, according to the legislation, the process of public acquaintance with the project is underway.

The implementation of the project is a technical necessity to increase the service life of refrigeration plates, especially in the area of ​​maximum thermal loads.

- What is the reconstruction itself? Cooling liquid is added in the form of chemically purified water, it does not boil, so this is a better cooling process. The maximum effect that we get from this is the high-quality operation of blast furnaces in the given technological parameters. The construction of a pumping station will reduce the negative impact on the environment, as there will be a closed cycle of water use. The operation of the system in a closed loop makes it possible to minimize the make-up of fresh service water to a minimum. That is, we will not take water from the Dnieper River.

The project provides for a large number of activities that will be carried out in two stages.

The implementation of the reconstruction project will begin, in particular, by starting the construction of a pumping station and changing the cooling technology with chemically purified water, only after the plant has received a conclusion to the project.

Recall that the Antimonopoly Committee of Ukraine yesterday completed the consideration of the case on granting permission to Metinvest BV for the indirect acquisition of DMK's assets. The sale takes place as part of the reorganization of the DMK and is necessary to prevent the liquidation of the enterprise. The companies belonging to the Metinvest group are among the creditors of DMK, whose claims were recognized in the bankruptcy case, the regulator said in a statement.

Recommended:
Crypto miners stop business in China: bitcoin dipped to 36 thousand dollars
Reuters learned the conditions for Russia's continued gas transit through Ukraine
Police catch homeless people ahead of G7 Summit in Cornwall - Euronews
On this topic
AMCU requested the opinion of the companies on the obligations of Metinvest in case of obtaining
PJSC "Dneprovsky Metallurgical Plant" allocated 38 million hryvnia for environmental activities
State Environmental Inspection in Court Demands to Stop Construction of New Tailings Dump at
Yuzhmash told whether it is possible to launch reusable rockets from the Black Sea
AMKR requests to allow public hearings by video-conference
Dneprovskiy metallurgical plant is ready to fill with slag, all the roads of Ukraine
Add a comment
Сomments (0)
News Analytics
Energoatom approved Electrotyazhmash as a supplier of turbine generators for16-06-2021, 14:57
Representatives of Ukraine and Germany discussed the prospects for cooperation16-06-2021, 10:49
Vestas and DTEK RES signed an agreement for the supply of wind turbines for the16-06-2021, 10:45
SSAB agrees with Volvo to supply and refine HYBRIT decarbonized steel16-06-2021, 10:40
Energomashspetsstal manufactured blanks for reactor equipment parts for16-06-2021, 09:38
Vaccinations fuel demand for platinum - World Platinum Investment Council08-06-2021, 12:55
Sharp price growth continues in the rolled metal market - Ukrpromvneshexpertiza08-06-2021, 11:04
Analysts note overheating of the global scrap metal market01-06-2021, 13:28
Hydrogen-fueled steelmaking could be competitive after 2050 - McKinsey19-05-2021, 14:22
Steel raw material prices are skyrocketing across the board18-05-2021, 12:34
Sign in with: