President of Ukraine Volodymyr Zelenskyy assures that the issue of debts of the production association (PO) "Makarov Southern Machine-Building Plant " (PO "Yuzhmash ", Dnipro) and wage arrears will be resolved. 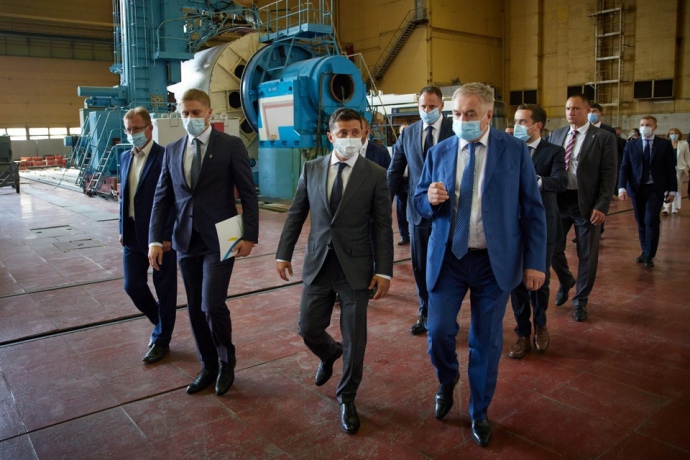 The Cabinet of Ministers allocated UAH 210 million to pay off salary arrears to employees of the production association "Makarov Southern Machine-Building Plant " (Dnipro), the Ministry of Economic Development, Trade and Agriculture reported on the website.

"State budget funds will be used to pay off salary arrears to employees in the amount of UAH 210 million," the Ministry of Economy said following a government meeting on Wednesday.

Recall that the Verkhovna Rada adopted in general the bill №3697, which provides for the allocation of the Southern Machine-Building Plant named after Makarov UAH 2.3 billion to replenish the authorized capital.

“We very often admire Elon Musk, applaud his projects and for some reason forget that we have Yuzhmash, there are incredible specialists who have unique knowledge and unique experience. The state will always support them and will reveal this potential to the maximum, ”said President of Ukraine Volodymyr Zelenskyy during his speech at the presentation of the Strategy for the Development of the Dnipropetrovsk Region.

PO "Yuzhmash " is one of the key enterprises of the rocket and space industry in Ukraine, a world-famous manufacturer of launch vehicles and satellites for civil, scientific and military purposes. Due to the breakdown of traditional cooperation in the context of the annexation of Crimea and military operations in the Donbass, over 50% of the company's production capacities have been in a state of actual downtime in recent years.

Recommended:
Ukrainian gas transmission system tested for hydrogen pumping capacity
Ukraine increased export of iron ore by 12.9% in eight months
The Antimonopoly Committee of Ukraine returned to DCH a package of documents on Motor Sich PJSC
On this topic
Yuzhmash told whether it is possible to launch reusable rockets from the Black Sea
The Verkhovna Rada of Ukraine constitutional majority supported the plan of salvation Yuzhmash
How the reform of the electricity market in Ukraine can lead to a collapse and what to do about it
Yuzhmash asks Ukrainian authorities to support the head of the national space Agency
At Turboatom presented the achievements of the economy of Ukraine in the last 100 days
Minamaneho asks members to approve 1 billion on payment of arrears to the miners
Add a comment
Сomments (0)
News Analytics
Australia to help Europe diversify lithium imports22-09-2020, 14:28
State Energy Efficiency of Ukraine proposes to amend the law "On Public22-09-2020, 13:58
India's largest state-owned metallurgical company "doubled"22-09-2020, 13:23
Dnipro Metallurgical Plant successfully combats oxygen losses in networks22-09-2020, 12:17
BELAZ delivered three dump trucks to the Irkutsk Region22-09-2020, 12:21
Iron ore prices to surpass six-year high soon16-09-2020, 10:32
World Oil Demand Peak May Be Over - BP15-09-2020, 09:05
China expands car market capacity by increasing demand for steel and metals11-09-2020, 10:56
Prices continue to rise in the long and flat steel markets08-09-2020, 14:25
Difference between ferrous and non-ferrous metal28-08-2020, 13:45
Sign in with: