Ukraine detensive the scrap metal market in the spring

In Parliament pending adoption of the law on legalization of scrap market before the summer, I hope to support all factions. 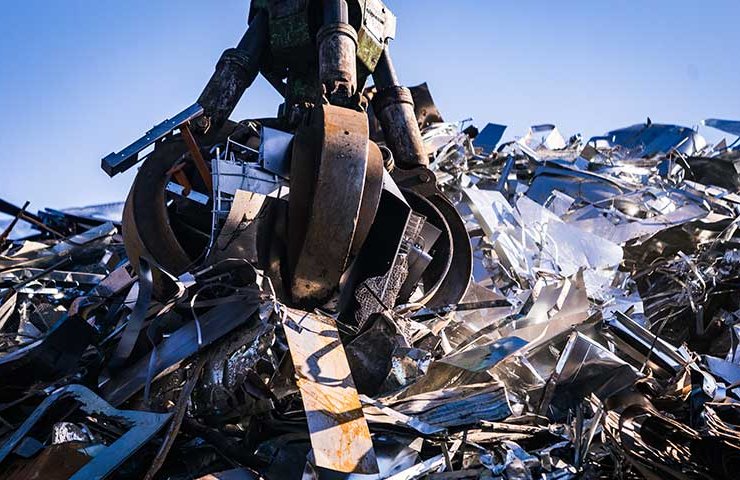 In the parliamentary Committee on economic development pending adoption of bill No. 2426 "On amendments to some legislative acts (regarding the legalization of the market of metallurgical raw materials and operations with scrap metal)" by the summer, 2020.

"Bill No. 2426 for the legalization of the market of metal scrap approved by the main Committee, the Committee for economic development and recommended for adoption in the first reading. Now we must obtain the opinion of anti-corruption Committee, then this bill will be submitted to Parliament in first reading," - said the Agency "Interfax-Ukraine" one of the authors of the bill, MP, Deputy Chairman of the Verkhovna Rada Committee on economic development Dmitry Kisilevskiy during the VI scientific-practical conference"Ukrainian steel scrap market: practical aspects and current challenges" in Kyiv on Thursday.

"I expect that we will have time during the current session to vote until the end of January. Then for two weeks the deputies will submit their amendments and on second reading of the bill will be released on February-March-April, depending on whether other pressing bills," - said the MP.

however, he noted that the law, if adopted, will take effect immediately, after which the points of reception of scrap metal will be able to be legalized. The MP added that he expects the stretch of this process for 3-5 years after the implementation of the law.

Kisilevsky reported that co-sponsors of the bill are 22 representatives of various factions and groups, which demonstrates its relevance and hope for a quick adoption. The interlocutor of Agency has added that now there is an ongoing dialogue with all stakeholders - market participants, authorities, other deputies in the advancement of the bill.

In particular, according to him, the deputies proposed to introduce the video recording and certification of physical persons on receipt of scrap metal - they believe that it is possible to identify those who steal. Is the position of Telecom operators: they claim that the cables and the elements of telecomcity to take only legal entities and to pay them only in cash. Has additional suggestions from the Ministry of economy.

In turn, the metallurgists are interested in the legalization of the market of scrap metal, as this will facilitate the transparency of work of the enterprises.

"We with market participants continue to be in constant contact, and we will continue to explore the market and after the adoption of the law, monitor the situation on the market. If you find that any factors we have not considered, will be used to Refine and adjust, make legislative initiatives," - said Kisilevsky.

As reported, the bill No. 2426 "On amendments to some legislative acts (regarding the legalization of the market of metallurgical raw materials and operations with scrap metal)" was registered in Parliament on 12 November 2019. Along with Kisilevsky sponsors of the bill have 22 MP. The development of the bill was the working group, which included representatives of lomozagotovitelej, metallurgists and economy.

the Bill is expected to eliminate a number of artificial restrictions and legal conflicts that impede legal employment market. You want to cancel unrealistic demands to the points of reception of scrap: you need to divide the activities in procurement of scrap and reprocessing activities. The billet – less requirements: don't need expensive industrial equipment, simpler requirements for the square of the item, etc. For recycling and metals refining, which is impossible without special equipment, all requirements remain in effect.

in addition, it is planned to eliminate the division between household and industrial scrap, to allow the official cash payments for the acquisition of the population of scrap metal. It is also planned to cancel the certificates of inspection of scrap-collecting companies of the regional administrations and resolve legal conflicts in article 213 of the Criminal code now criminalizes the implementation of operations with scrap metal in the case that the company is not entered in the register.

the Parliamentary Committee on issues of economic development in early December of this year approved the bill No. 2426. Presenting the bill, Mr Kisilevsky stated that traditionally, 80% of the domestic scrap market is in the shade. "This bill create the preconditions for the withdrawal of the shade about 16 billion UAH. The state will receive about 900 million UAH of additional tax revenue", - he stressed.

Kisilevsky recalled that scrap is a strategic raw material for the metallurgical industry of the country. In addition, according to him, the bill is part of the initiatives of the Committee for economic development of the deshadowing of economy.

Финансовая аналитика, прогнозы цен на сталь, железную руду, уголь и другие сырьевые товары. More news and analytics on Metallurgprom telegram channel - subscribe to get up-to-date market information and price forecasts faster than others.
Сomments
Add a comment
Сomments (0)
On this topic
The Verkhovna Rada of Ukraine supported the withdrawal of the scrap metal market out of the shadows
Electrotyazhmash announced the end of the crisis period and the beginning of recuperation
Ukrmetallurgprom advocated prolongation of the duty on the export of scrap metal from Ukrayrna for
The Verkhovna Rada of Ukraine constitutional majority supported the plan of salvation Yuzhmash
The Verkhovna Rada of Ukraine extended the duty on the export of ferrous scrap
MP Taruta said that Ukraine is in serious economic recession
Recommended:
China's crude steel production in 2022 falls for the second year in a row
British Steel seeks financial support from the government to continue work
JSW Steel, ArcelorMittal and NLMK may buy two Liberty Steel plants in Belgium
News Analytics
The United States refused to comply with the decision of the WTO on tariffs on29-01-2023, 20:08
China remains the world leader in shipbuilding with a 50% share of new shipyard29-01-2023, 12:35
Prices for metal products in Ukraine increased by 26% last year29-01-2023, 12:06
JSW Steel, ArcelorMittal and NLMK may buy two Liberty Steel plants in Belgium29-01-2023, 12:12
British scientists have found a way to cut CO2 emissions from steel production28-01-2023, 23:49
S&P: Russia will continue to dominate the steel export market in the Black05-01-2023, 11:22
Fitch Analysts Predict Big Drop in Global Steel Consumption This Year14-12-2022, 13:59
Analysts predict 5% annual growth in the iron casting market through 203006-12-2022, 12:44
Commodity prices will fall, metals quotes will rise slightly - Focus Economics28-11-2022, 13:28
Platinum market to face shortage next year - WPIC22-11-2022, 18:25
Sign in with: