AO "AvtoKrAZ " is the only manufacturer of heavy vehicles in Ukraine, produces 33 basic models, more than 260 modifications and complete sets of automotive equipment. 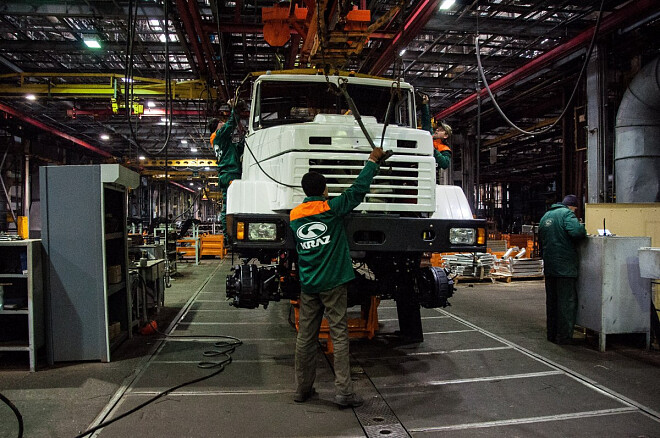 The mayor of Kremenchug (Poltava region) Vitaliy Maletskiy intends to initiate an appeal to the Ukrainian leadership with a proposal to nationalize JSC "AvtoKrAZ ", which is part of the financial and industrial group of Ukrainian businessman Konstantin Zhevago, in order to avoid the destruction of the enterprise.

"It so happened that at one time, Mr. Zhevago took over one of the largest enterprises in Kremenchuk, the flagship of the Ukrainian engineering industry, and is now gradually bringing it to complete destruction. The situation can only be influenced at the state level if the issue of nationalization is resolved KrAZ and its return to state ownership. He instructed to prepare on my behalf a corresponding appeal to the state leadership, "the mayor wrote on Facebook after meeting with employees of the enterprise at the end of last week.

He stressed that the plant should receive government orders for equipment for the army, utilities, special units and enterprises, and workers should have a job and a stable wage.

Maletsky also said that the city government intends to provide assistance to the workers of the plant, in particular, it will help to prepare claims in court to receive "earned money ", to solve complex issues of granting subsidies, providing utilities for those living in departmental housing.

According to local media reports, workers of the enterprise went to a rally last week demanding to pay off the wage arrears for eight months, blocked traffic on the Kiev highway.

The general director of KrAZ, Roman Chernyak, told them that he had already visited Kiev, where he met with the authorities and made sure that the army would not buy Belarusian MAZs, and that he intended to sign a contract with the army. He also suggested that the factory workers turn to Maletsky with a requirement to buy KrAZ trucks for the city, not MAZs.

AO "AvtoKrAZ " is the only manufacturer of heavy vehicles in Ukraine, produces 33 basic models, more than 260 modifications and complete sets of automotive equipment.

According to the company's last published financial report on its website, in 2018 the net loss amounted to UAH 4.7 billion, against UAH 90 million a year earlier, the net income decreased by 7%, to UAH 976.3 million. 540 cars were sold (about 1.2 thousand were expected), including 93% - on the domestic market.

The company does not provide data on the number of cars produced and sold for the second year.

At the suit of Oschadbank, the Kiev economic court in September 2018 opened bankruptcy proceedings for JSC "AvtoKrAZ " (Kremenchuk, Poltava region), recognizing the bank's monetary claims in the amount of UAH 555.688 million, and introduced a procedure for disposing of the debtor's property. p>

In August, the court satisfied Oschadbank's claim against a number of related LLCs for foreclosure on their shares of AvtoKrAZ JSC with a par value of UAH 185 million (32.7% of the company's authorized capital) to repay the company's debt to the bank under a loan agreement by selling at a public auction under the enforcement procedure.

The management of the enterprise has repeatedly stated that the difficult situation at the plant was caused primarily by the lack of orders from government agencies, which even at public tenders prefer imported equipment.

President of Ukraine Volodymyr Zelensky, during a visit to the enterprise in March this year, through the director of "AvtoKrAZ " asked Zhevago "to get in touch " to discuss the situation at the enterprise, including with state orders.

"Tell the owners to get in touch with us. Then you can discuss the problems of bankruptcy, and get out of all claims, court cases. I think this is the only way out. We will do everything in parallel, but when the owner of the company, which the state gives money, there may be problems, "the president said then.