Lviv Locomotive Repair Plant received an order to repair six more locomotives by the end of the year. 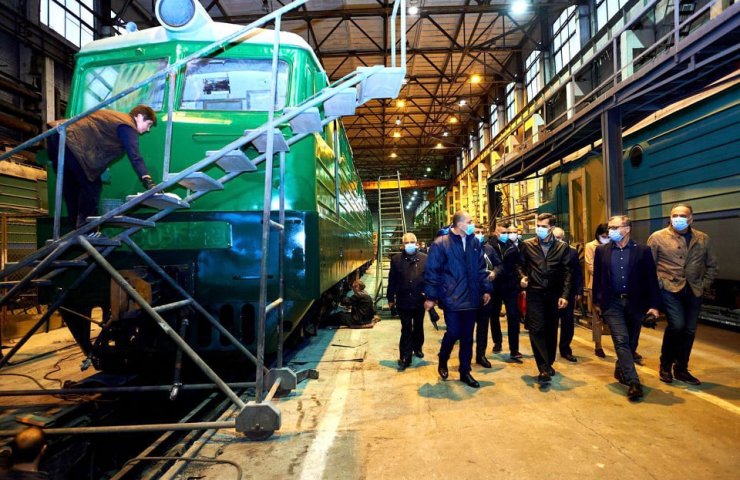 Understanding the urgent need to update the locomotive fleet, the management of Ukrzaliznytsia found an opportunity to increase the volume of major repairs. The chairman of the board of JSC "Ukrzaliznytsia" Vladimir Zhmak told his subscribers in Teleharmm about this.

He outlined the company's plans to improve the condition of the locomotive fleet: “We have already made a decision to allocate about UAH 400 million for the repair of locomotives by the end of the year. Moreover, our main priority in 2021 is the overhaul of the traction fleet, for which UAH 4.7 billion will be provided in the company's budget. ”

Today, as part of a working trip to the regional branch of the Lviv Railway, the Chairman of the Board of Ukrzaliznytsia visited the Lviv Locomotive Repair Plant and the Lviv-West locomotive depot.

This year at the Lviv Locomotive Repair Plant it is planned to restore 11 electric locomotives by overhaul. An additional six units are scheduled for completion before the end of this year.

In total, this year Ukrzaliznytsia plans to overhaul 144 locomotives.

Recommended:
Gazprom reacted to the refusal of Naftogaz of Ukraine to buy Russian gas with the words "no one offered"
World's first 3D-printed bridge in Amsterdam's red light district
Ukraine invests over 50 billion hryvnia in the renovation of passenger cars and infrastructure
On this topic
The European Union has opposed the adoption of Ukraine's law on localization of production
Ukrzaliznytsia has started the selection of candidates for the delivery of electric locomotives
DSS supported the idea of localization of production in Ukraine electric locomotives
ArcelorMittal Kryvyi Rih said about import substitution and the fight against Russian sanctions
Railways in 2020 will buy the 40 locomotives General Electric
Ukrzaliznytsia in the next year will build eurokolia in Western Ukraine
Partner news
Сomments
Add a comment
Сomments (0)
News Analytics
Azerbaijan's SOCAR plans to invest in the extraction of battery metals in26-07-2021, 22:00
The first domestic industrial energy storage system was developed and launched26-07-2021, 22:11
The profitability of purchases of scrap metal in Ukraine has decreased, but is26-07-2021, 17:27
Metinvest is ready to pay more than 9 billion hryvnia for the Dnieper steel26-07-2021, 13:01
Cherkassk Azot by Dmitry Firtash completed the modernization of the ammonia26-07-2021, 13:45
On the regional markets of metallurgical products, prices are balancing in a22-07-2021, 16:22
Demand for armaments will ensure a stable growth of armored steel sales by 4%20-07-2021, 10:10
Protectionist Measures Support European Steel Prices Despite Summer Lull19-07-2021, 11:02
Positive price growth is observed in the markets for metallurgical products16-07-2021, 14:12
European steel market is in confusion: price growth has slowed down, but no one21-06-2021, 17:40