In total, since 2012, Zaporizhstal has allocated more than UAH 15 billion for the environmental modernization of the enterprise. 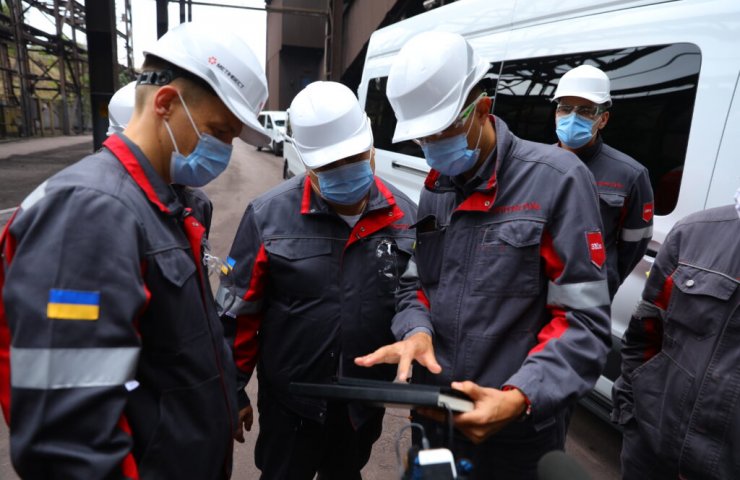 On October 1, 2020, Vitaly Bogovin, Chairman of the Zaporizhzhya Regional State Administration, paid a working visit to Zaporizhstal. The general director of the plant, Alexander Mironenko, briefed the head of the region in detail with the projects for the ecological modernization of the plant, investments in which amounted to 15 billion hryvnias of the company's own funds.

During the visit, the chairman of the Zaporizhzhya Regional State Administration Vitaliy Bogovin visited the central dispatching office of the enterprise, the sinter plant and the construction site for additional aspiration of the tail parts of sinter machines.

“Since 2012, we have modernized the gas cleaning systems of all sintering machines and achieved a 70% reduction in dust emissions from the sinter plant. Taking into account the best world practices at Zaporizhstal, the air is cleaned from dust - up to 30 mg /m3, each sinter machine is equipped with emission control sensors, which online show the efficiency of the gas cleaning equipment, "- informed the head of the region Alexander Mironenko.

Following the results of the working visit, the chairman of the ZOGA Vitaly Bogovin noted:

“The public requires the authorities to respond and take real measures to help solve environmental problems. We cannot ignore these demands. The Zaporizhzhya industrial site is not just Zaporizhstal, but many other enterprises. But you are one of the largest enterprises in the region and at the same time have the largest environmental modernization program. We expect from Zaporizhstal a plan of specific measures to reduce the load on the atmospheric air - clear, consistent steps with clear and realistic deadlines for implementation. We will include them in the memorandum between the authorities and the Zaporozhye enterprises and we will monitor their implementation. ”

As a result, an agreement was reached to sign a Memorandum of the Zaporizhzhya Regional State Administration with PJSC Zaporizhstal, under which the plant will undertake additional obligations to reduce its production emissions into the atmosphere.

Since 2012, Zaporizhstal has allocated more than UAH 15 billion for the environmental modernization of the enterprise. In addition to equipping the sinter plant with new aspiration units, blast furnaces No. 2, 3, 4 were reconstructed. A modern hydrochloric acid pickling line was built, which made it possible to completely stop the discharge of sulfuric acid vapors from cold rolling shop No. 1 into the Dnieper and sulfuric acid vapors into the atmosphere.

Recommended:
International Energy Agency predicts 30% growth in global steel demand
Tesla to build exclusive electric cars in Berlin for $ 25,000
Ukraine is regarded as a key EU partner in the development of hydrogen technologies
On this topic
In Zaporizhstal told how much is spent on the diagnosis of gas purification systems
"Zaporizhstal" was visited by a member of the Board of JSC "Ukrzaliznytsya" Frank buresh
"Zaporizhstal" presented case studies of ecomaterial in the national platform of ecological and
Zaporizhstal orders for the four months ahead – CEO
General Director of "Zaporizhstal" steel works appointed Alexander Mironenko
ArcelorMittal Kryvyi Rih reconstructed half of the sintering machines of the second sinter plant
Add a comment
Сomments (0)
News Analytics
Steel production in September 202023-10-2020, 17:21
Innovative matrix headlights on the Audi E-Tron19-10-2020, 22:43
Tensions rise between China and Australia over commodity trade14-10-2020, 18:15
The European Union confirms its intention to introduce a border tax on carbon13-10-2020, 13:20
ArcelorMittal Europe to start producing green steel from 202013-10-2020, 12:44
Dolomite powder market to reach USD 33.44 billion by 202705-10-2020, 12:33
Iron ore prices to surpass six-year high soon16-09-2020, 10:32
World Oil Demand Peak May Be Over - BP15-09-2020, 09:05
China expands car market capacity by increasing demand for steel and metals11-09-2020, 10:56
Prices continue to rise in the long and flat steel markets08-09-2020, 14:25
Sign in with: