New energy-efficient autotransformers produced by Zaporozhtransformator will be installed at the 750 kV Zaporozhskaya and Dneprovskaya substations. 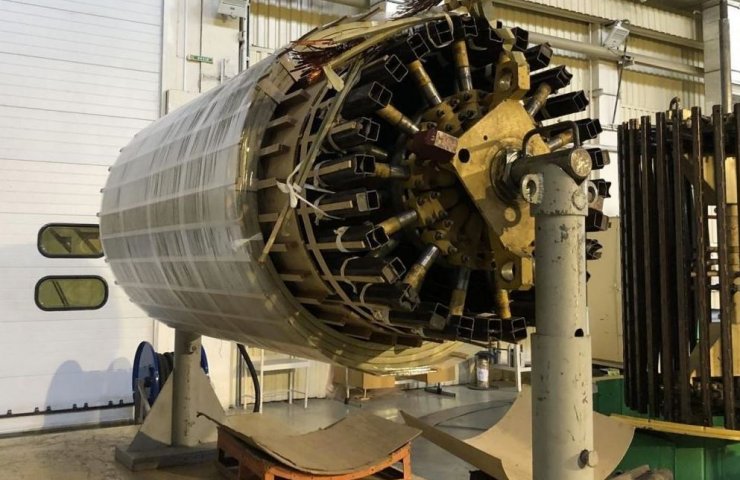 New energy-efficient autotransformers (AT), as well as transverse control transformers (TPR) produced by CJSC "ZTR" will be installed at 750 kV substations "Zaporozhskaya" and "Dneprovskaya".

In new AO, no-load losses are 24% lower than in conventional AO, short-circuit losses on the low voltage side are 70% lower, on the medium voltage side - by 24%. Also, new JSCs are equipped with diagnostic systems, which will later be connected to the automated process control system (APCS) of the substation, which will allow the Customer to receive data on the state of the JSC online.

Especially for Ukrenergo substations, ZTR has proposed a new energy-efficient model of an autotransformer in the 750 kV voltage class, and now the manufacture of this equipment is being completed, which was recently inspected by Ukrenergo specialists.

Technical factory tests will begin at the end of October, which will also be attended by Ukrenergo specialists and representatives of FICHTNER (Germany), an international consultant from the creditor bank.

In particular, the compliance of the data obtained as a result of the tests of transformer equipment with the technical characteristics specified in the contract will be checked and confirmed. The first delivery of the AT-3 and TPR phases to the 750 kV Zaporozhskaya SS is planned at the end of this year.

REFERENCE: Zaporozhtransformator CJSC is one of the world's largest manufacturers of transformer equipment with experience in deliveries to 88 countries. The enterprise manufactures power oil transformers, electric reactors, controlled shunt reactors.

Recommended:
Workers of the only uranium mining enterprise in Ukraine prepare for protests
Metinvest extended maturity of bonds
Launch vehicle "Antares" is carrying a new toilet for the crew to the ISS
On this topic
Ukrenergo in 2020 will receive less than 100 million hryvnia due to the law on "green" metallurgy
Zaporozhtransformator postat in Belarus controlled shunt reactor
ZTR will supply two powerful transformer to Georgia
In the shops "Turboatom" work continues on equipment for the Ukrainian hydro power plants
"Ukrenergo" has filed a lawsuit against Minamaneho for delay approval of the investment
Belarus buys in Ukraine of a new generation of transformers
Add a comment
Сomments (0)
News Analytics
Thyssenkrupp says negotiations to sell steel business have not progressed a step30-10-2020, 18:50
Kazakhstan launched a new technology for the production of batteries30-10-2020, 16:03
Erbol Nurgaliyev visited the metallurgical plant of JSC "ArcelorMittal Temirtau"30-10-2020, 16:27
Ukrzaliznytsia and NABU signed a memorandum of cooperation30-10-2020, 16:59
DMK expands its assortment of continuously cast billets30-10-2020, 16:19
Platts Steel Trade Review: China Will Decide Asia's Fate30-10-2020, 10:04
Dolomite powder market to reach USD 33.44 billion by 202705-10-2020, 12:33
Iron ore prices to surpass six-year high soon16-09-2020, 10:32
World Oil Demand Peak May Be Over - BP15-09-2020, 09:05
China expands car market capacity by increasing demand for steel and metals11-09-2020, 10:56
Sign in with: