The official opening of the Posco grain terminal in the Nikolaev seaport "Nikolaevsky KHP" took place in September 2019. 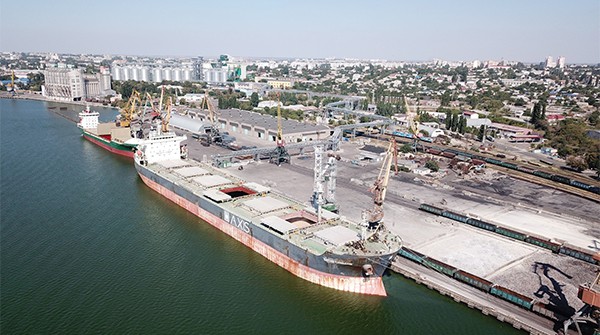 Of the total, 41 thousand tons were imported through the Ukrainian Grain Terminal, built by a trading company in September last year in Ukraine. This is the first import of feed grains from an overseas grain terminal of a Korean company.

Korea uses 3.43 million tons of wheat every year, but its wheat production is less than 20,000 tons, less than 1 percent of its need.

The chairman of the Posco metallurgical company Choi Jong Woo took the initiative to develop the food business as part of 100 group reform projects in 2018. In September last year, as part of this initiative, a grain terminal was built in Ukraine with a capacity of 2.5 million tons.

With the growing instability in the global grain market, the company is striving to turn the food business into the next engine of growth and create a stable food procurement system to ensure the country's food security, ”said Joo Si-bo, President and CEO of Posco International.

Faced with major challenges in securing adequate food and grain supplies amid protectionist restrictions caused by the pandemic and disruptions to logistics, a total of 22 countries, including some of the world's largest rice sellers, have partially or completely stopped their exports .

Recommended:
Ukraine reduced steel production in January - October 2020 by 5.3%
Dneprospetsstal completed overhaul of radial forging machine
Taiwanese company confessed to industrial espionage in the United States and agreed to pay fines
On this topic
Steel production in September 2020
Belarusian products may flow to Russian ports
The cargo terminal at the Kherson shipyard had the opportunity to serve vessels with a draft up to
South Korea's Hyundai Motor resumed production after a partial lifting of the quarantine in China
Ghana remains a major importer of manganese ore in Ukraine
World steel production in September fell by 0.3%
Add a comment
Сomments (0)
News Analytics
Bank of America predicts higher prices for metals, iron ore and coal in 202125-11-2020, 21:35
ArcelorMittal recalled how steel bars appeared on the windows of Alcatraz prison25-11-2020, 21:30
Tens of thousands of jobs in the Ukrainian metallurgy under the threat of25-11-2020, 16:46
British billionaire Sanjeev Gupta raises the stakes in race for Thyssenkrupp25-11-2020, 15:12
Ukrzaliznytsia plans to increase its share of the transportation market in its25-11-2020, 15:54
European Union scrap collectors worried about possible export restrictions18-11-2020, 10:41
Occupational diseases of workers in the extractive industry: types and ways to16-11-2020, 17:49
Eurofer expects recovery in EU steel demand05-11-2020, 09:47
Hot rolled carbon steel demand will continue to grow by 4% pa until 203004-11-2020, 16:14
Platts Steel Trade Review: China Will Decide Asia's Fate30-10-2020, 10:04
Sign in with: