Analysts believe that the escalation of the conflict between Russia and Ukraine could lead to the closure of Ukrainian ports in the Azov and Black Seas, which will cause a halt in the export of iron ore, steel and wheat. 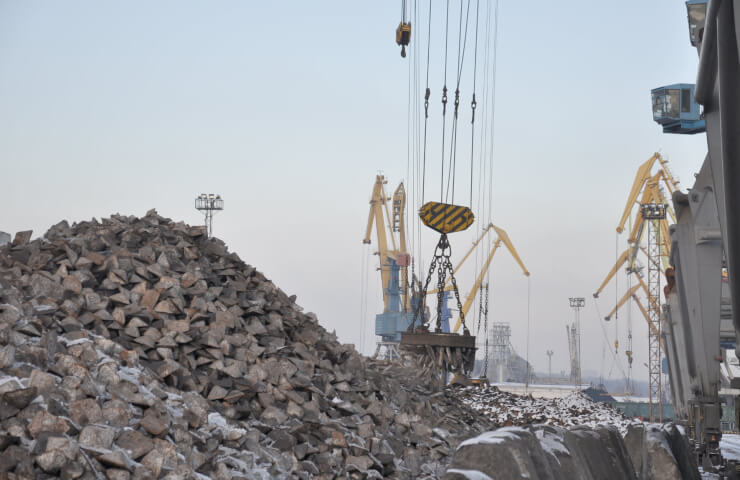 The disruption of the Russian Federation's negotiations with NATO and Russian military exercises on the border with Ukraine on January 14 have raised serious concerns about a possible invasion of Europe's largest gas transportation hub and fears of even greater volatility in commodity prices. About this written by S&P Global Platts Analytics.

“The likelihood of hostilities in Ukraine rose on Jan. 13, when Russia ended a week of 'unsuccessful' talks, warning that diplomacy could end soon,” said Paul Sheldon, chief geopolitical adviser to Platts.

Tensions will remain even if short-term talks avert hostilities, Sheldon said, as Russian escalation around Donbass and cyberattacks could potentially achieve Russia's goals by dividing the US and EU over how tough to respond.

Platts recalled that the transportation of Russian gas through Ukraine has been declining in recent years and dropped significantly in early 2022. Of the 109.9 million cubic meters per day that Russia could potentially supply under its transport agreement with the EU, net flows out of Ukraine averaged just 45.067 million cubic meters per day between January 4 and 10, 2022.

In addition to gas, Ukraine is one of the world's largest grain exporters, and any supply disruptions could affect food security and prices.

Ukraine accounts for about 13% of world corn exports, it is the fourth largest exporter in the world and by far the largest exporter in Europe. The country accounts for about a tenth of global wheat exports, which rose 27% in the 2021-22 marketing year (July to the end of June) to 16.1 million tonnes as neighboring Russia increased its export duties.

The country is also the 13th largest steel producer in the world and the fifth largest exporter of iron ore. In 2021, Ukraine produced 21.4 million tons of crude steel. About 80% of steel production is exported.

Platts believes that Russia may close Ukrainian ports to maintain its control over Crimea and Black Sea bottlenecks.

The Kerch Strait connects the Black and Azov Seas and is used in both directions for the supply of soft goods, the transportation of steel/iron and other raw materials from Mariupol.

The Russian ports of Azov and Rostov serve both as staging ports for loading deep-sea vessels in the Russian port of Kavkaz, and as loading points for small shipments of wheat, barley and corn to destinations in the eastern Mediterranean.

Both corn and wheat are exported through a number of Ukrainian seaports, including the southwestern ports of Odessa, Yuzhny and Chornomorsk, capable of handling panamaxes, all of which are far from the front line. However, they are all within easy reach of Crimea, which is currently under Russian occupation.

Mariupol, Ukraine's main port on the Sea of ​​Azov, is vital for exporting iron and steel from Ukraine and importing raw materials for steel production, especially coking coal. In recent years, steel supplies from Mariupol accounted for about a quarter of Ukraine's total exports in value terms.

Any restriction on the passage of ships through the Kerch Strait is likely to affect the supply routes used by Metinvest and other bulk carriers on this route.

Formerly it was reported that fears about a possible Russian military invasion of Ukraine have intensified against the backdrop of news of fruitless talks between Russia and NATO. This led to the collapse of European securities issued in Ukraine and a sharp drop in the hryvnia against the US dollar.

Финансовая аналитика, прогнозы цен на сталь, железную руду, уголь и другие сырьевые товары. More news and analytics on Metallurgprom telegram channel - subscribe to get up-to-date market information and price forecasts faster than others.
Сomments
Add a comment
Сomments (0)
On this topic
The presidents of Ukraine and Switzerland visited the KP "Water of Donbass"
NATO expressed gratitude to the state enterprise "ANTONOV" for the work in the framework
The economy for the first time joined the work of the Commission Ukraine-NATO
The security threats from the launch of Nord Stream 2 cannot be compensated for - Naftogaz
How the reform of the electricity market in Ukraine can lead to a collapse and what to do about it
NATO may intervene in the Turkish-Syrian conflict
Recommended:
India's JISPL extends blast furnace maintenance indefinitely
Taiwan is preparing to repel the invasion of Russian steel in Asia
World steel prices have moved from a protracted fall to growth
News Analytics
India prepares to lift export duties on steel09-08-2022, 08:34
Russian metallurgists will need more than 10 years to replace imports of key09-08-2022, 07:23
China reduced steel exports in July by one million tons or 12%08-08-2022, 17:41
World steel prices have moved from a protracted fall to growth08-08-2022, 16:27
Ferrexpo's net profit in the first half of the year decreased by 88%03-08-2022, 10:20
The US market may begin a collapse in prices for thick sheet14-07-2022, 09:39
High iron ore shortage could halt metallurgy's green transition28-06-2022, 14:02
Price volatility hits global steel market27-06-2022, 19:28
Recovery in China could be key to rising global steel prices - MEPS24-06-2022, 14:00
Conflict in Ukraine spurs Europe's drive for clean energy03-06-2022, 12:14
Sign in with: