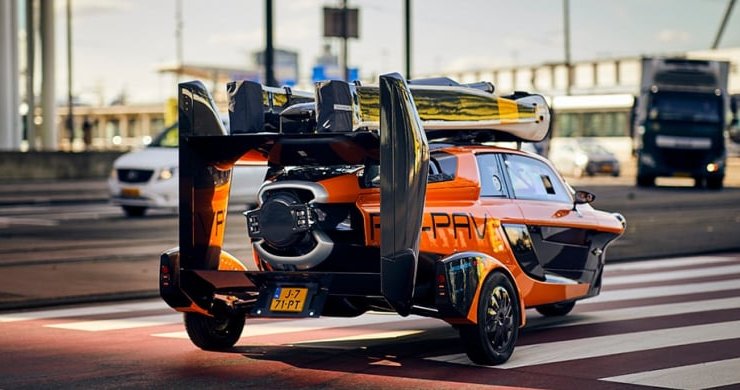 Dutch company PAL-V announced that its Liberty model has received a permit from the Dutch Motor Vehicle Administration, which allows it to travel on public roads in the EU.

The PAL-V company was founded in 2001, and the first prototypes took off in 2012. Vehicle weight - 664 kg, maximum takeoff weight - 910 kg. The Liberty can carry two people. In ground mode, it is driven by a 100-horsepower motor. At the same time, the operational indicators are by no means as bad as one might assume: it takes only 9 seconds to accelerate from 0 to 100 km /h, the maximum speed is limited at around 160 km /h, and the power reserve is as much as 1315 kilometers.

A 200 hp engine is used for flight. In the air, the rotorcraft can accelerate to 180 km /h, although the comfortable cruising speed is 140–160 km /h. The flight range depends on the take-off weight and is 400–500 km. At the same time, the manufacturer also includes in these data the ability to drive 100–150 kilometers after landing. Fuel tank capacity - 100 liters. You can refuel gasoline from AI-95 and higher.

It only takes 5-10 minutes to switch to flight mode and back, and you don't even need a special tool. And this vehicle has enough runway length of 330 meters, so almost any airfield will do. Note that while the PAL-V Liberty cannot legally take off. The work on issuing the aviation certificate of the European safety agency Easa started in 2015, the company expects to receive it in 2022. More than 1200 test reports must be completed before the last 150 hours of flight testing. After that, deliveries to customers will begin.

According to PAL-V, the company has already received 30 pre-orders for the purchase of Liberty. The base price tag is $ 399,000, and the Liberty Pioneer Edition, captured in the pictures, will cost $ 599,000.

Recommended:
Boeing will cut 20% of its staff by the end of 2021
Audit of the State Reserve of Ukraine confirmed the total plundering of reserves - Ministry of Economy
Shanghai relocates 5-story school building with a "walking machine" (Video)
On this topic
Yuzhmash told whether it is possible to launch reusable rockets from the Black Sea
Yuzhmash successfully tested a rocket engine upper stage "Cyclone-4" (Video)
On the roads of Ukraine introduced strict control over waybills
BMW together with Japanese Toyota has created a hydrogen engine with an output of 374 HP
In ANTONOV commented on the incident with An-124 at the airport of Ostend
Liberty Steel cuts steel production in the Czech Republic by 20 percent
Add a comment
Сomments (0)
News Analytics
British Steel Teesside increases headcount for the first time in many years26-11-2020, 19:44
"Bogdan Motors" started manufacturing trolleybuses for KP "Kyivpastrans"26-11-2020, 17:17
Minks infected with coronavirus found near border with Ukraine26-11-2020, 16:44
All Maserati will be electric cars in five years26-11-2020, 16:37
Secret metallurgical equipment for Azovstal arrived in Mariupol port26-11-2020, 15:55
European Union scrap collectors worried about possible export restrictions18-11-2020, 10:41
Occupational diseases of workers in the extractive industry: types and ways to16-11-2020, 17:49
Eurofer expects recovery in EU steel demand05-11-2020, 09:47
Hot rolled carbon steel demand will continue to grow by 4% pa until 203004-11-2020, 16:14
Platts Steel Trade Review: China Will Decide Asia's Fate30-10-2020, 10:04
Sign in with: