Krukovka Carriage Works has sent a 1,500th mineral locomotive to a Belarusian customer

Over the past two years, 1,500 mineral carriers have rolled off to Belarus from the stocks of the Kryukovsky Carriage Works. 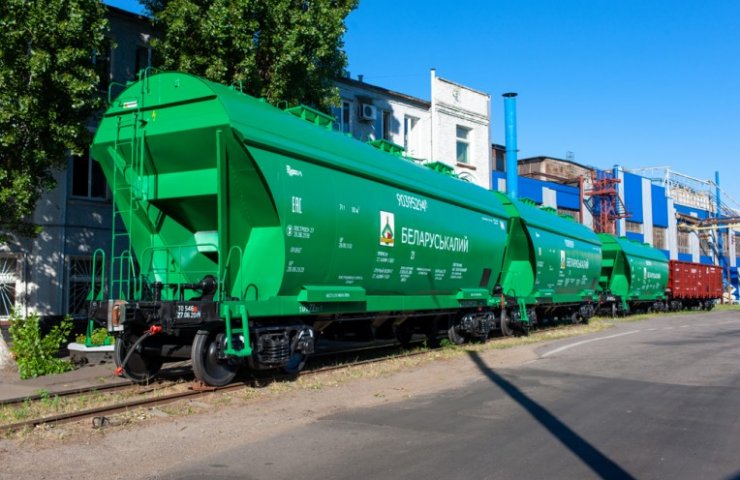 On November 23, the Kryukov Carriage Works (KVSZ) sent to Belarus 50 cars for the transportation of mineral fertilizers from the final contract batch for the open joint stock company Belaruskali. Of all the twin cars, one was distinguished, on which the employees of KVSZ put down a symbolic inscription "1500 car".

“With this company, which today is one of the largest producers and exporters of potash fertilizers in the world, our company has been cooperating for 15 years. Belaruskali is a dynamic company that is rapidly developing, increasing the production of mineral fertilizers. For the transportation of its products, the enterprise needs reliable and powerful equipment, so it makes sure that its transport fleet meets its own needs and requirements of the time, carefully studies the proposals of railway car manufacturers for its regular replenishment and renewal, "the press service of the Ukrainian enterprises.

In 2005, Kryukovsky Carriage Building already had experience in the manufacture of modern mineral locomotives, therefore it was one of the candidates for the supply of this railway equipment. Then the company sold 550 cars of this model to various customers.

After a long break in 2018, the enterprises resumed cooperation, and the Belarusian customer signed an agreement with KVSZ for the supply of 1000 cars for the transportation of mineral fertilizers of a new development of car builders - model 19-7017-05.

“I would like to hope that the cooperation of JSC“ KVSZ ”with the well-known Belarusian company will have no less meaningful continuation. At least its representatives are already interested in whether our plant is planning to produce mineral wagons with increased axle load and carrying capacity. There is no doubt that the engineers of the Kryukovsky Carriage Building will fulfill any customer's request. There would be orders, but the production potential and the desire to work at the plant will be enough, ”the KVSZ stressed.

Recommended:
Russia expanded sanctions against Ukraine
Germany's second largest private bank closes branches in 15 countries
Head of Azerbaijan's largest metallurgical company accused of fraud
On this topic
Krukovka Carriage Works disclosed the findings of the company's repeated internal audit
Yuzhmash told whether it is possible to launch reusable rockets from the Black Sea
Vladimir Zelensky invited to adopt a programme of industry support of Ukraine
Ukrzaliznytsia plans to purchase in 2020 of 26 new passenger cars
Top Manager kvsz called calls privacy office minifrastruktury to Hyundai "unpatriotic"
Belarus buys in Ukraine of a new generation of transformers
Add a comment
Сomments (0)
News Analytics
Canada's economy plunges record 5.4% in 202002-03-2021, 21:42
UN Secretary General has called coal mines a past, from which it is time to02-03-2021, 20:44
Metallurgical enterprises of Ukraine increased earnings from the export of02-03-2021, 19:50
Trade union committee "Azovstal" received an answer to the question about the02-03-2021, 18:39
Greenhouse gas emissions returned and exceeded levels prior to the pandemic -02-03-2021, 14:16
Spread between raw materials and high strength alloy steel in Europe increased01-03-2021, 20:21
Increase in prices is forecasted in the markets of steel raw materials -26-02-2021, 09:25
Troy ounce of gold will drop $ 500 in two years - Fitch25-02-2021, 18:29
Global iron ore production growth to outstrip cumulative production in India23-02-2021, 10:22
Fitch Ratings Warns of “Shocking Impact” on Fossil Fuel Exporters18-02-2021, 14:44
Sign in with: