Earlier today it was reported that three major overhauls were recently completed at the Azovstal metallurgical plant. 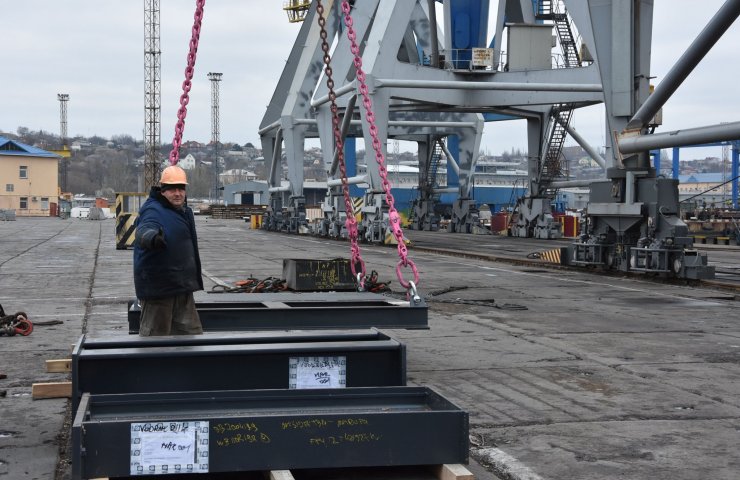 Today, a ship from Antwerp (Belgium) with equipment for the Azovstal metallurgical plant of Metinvest Group came to the port of Mariupol. This was reported in the press service of the Mariupol International Trade Port without disclosing details.

As you know, the Azovstal Iron and Steel Works transship most of its export products through the Mariupol port, but this time on the VOORNEDIJK motor ship an imported cargo - equipment - arrived for the iron and steel works. It is supplied to the plant as part of the modernization of the enterprise, which in turn will improve the quality of products.

Of the twelve cargo packages that arrived at the port on the motor ship "VOORNEDIJK" - three weighing about 100 tons, which means that a powerful portal crane is needed to unload them.

The port of Mariupol is the only one in the Azov ports of Ukraine that has such reloading equipment. We are talking about the portal crane "Neptune-4", which is capable of handling oversized and heavy cargo weighing up to 150 tons.

It is assumed that it will take no more than 12 hours to unload the equipment.

Recommended:
Honda will stop supplying cars to the Russian market in 2022
Max Polyakov's Firefly Aerospace plans two launches of the Alpha space rocket in 2021
In Mariupol, traffic near Azovstal was blocked due to the message about the mining of the plant
On this topic
Mariupol Commercial Sea Port doubled the transshipment of ferrous metals
Yuzhmash told whether it is possible to launch reusable rockets from the Black Sea
How the reform of the electricity market in Ukraine can lead to a collapse and what to do about it
Mariupol plants for the first time in history started to ship slabs to Odessa by sea
At the Kherson shipyard modernized crane vessel ATLAS1
The ship that brought coal to Ukraine from Colombia called at the Russian port of Ust-Luga
Add a comment
Сomments (0)
News Analytics
Germany gave permission for the completion of Nord Stream 2 in January - May15-01-2021, 11:10
Zaporizhstal exported about 900 thousand tons of rolled metal along the Dnieper15-01-2021, 11:39
Russian automotive market shrank 9.1% in 202015-01-2021, 09:44
Installation of a spreader made by Ukrainian NKMZ continues in Uzbekistan15-01-2021, 09:06
KZhRK began work on the installation of a new skip hoisting unit at the15-01-2021, 09:37
China will overtake the United States to become the world's largest economy in27-12-2020, 12:04
The shortage in the US steel market will last at least until the end of the25-12-2020, 11:36
Steel production in China to surpass one billion tons this year23-12-2020, 10:59
Iron ore prices hit seven-year high and continue to rise15-12-2020, 10:26
Prices for metallurgical raw materials continue to rise in regional markets10-12-2020, 11:32
Sign in with: