In total, ArcelorMittal Kryvyi Rih currently has three blast furnaces in operation - No. 6, 7, 9. Another blast furnace, No. 8, has been shut down for overhaul. 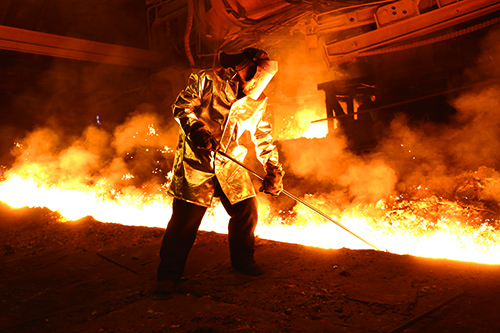 ArcelorMittal Kryvyi Rih has completed an extended overhaul of the third category of blast furnace No. 7 of blast furnace shop No. 1. Overhaul made it possible to restore the technological parameters of the furnace and enter its design production - 3,500 tons of pig iron per day. The costs of the enterprise for the renewal of the metallurgical unit amounted to over UAH 140 million.

The overhaul lasted 25 days and ended with a record-breaking fast blow-in of the furnace, the total volume of which is 2,000 cubic meters. Among the main works is the restoration of the blast furnace cooling system: out of 400 cooling plates, 124 have been replaced, which is 30% of the entire cooling system. Shotcreting of the blast furnace shaft was carried out - all refrigerator plates are now reliably "hidden" under refractory concrete. The loading device and the skip winch have been replaced, namely, its fourth speed has been restored. This immediately increased the furnace productivity by 500 tons of pig iron per day. Almost half of the foundry yard of the furnace has been dismantled and actually rebuilt, while the other part has been significantly strengthened, which contributes to industrial safety.