Residents of nearby houses and activists demand to stop the harmful emissions of the coke-chemical plant. 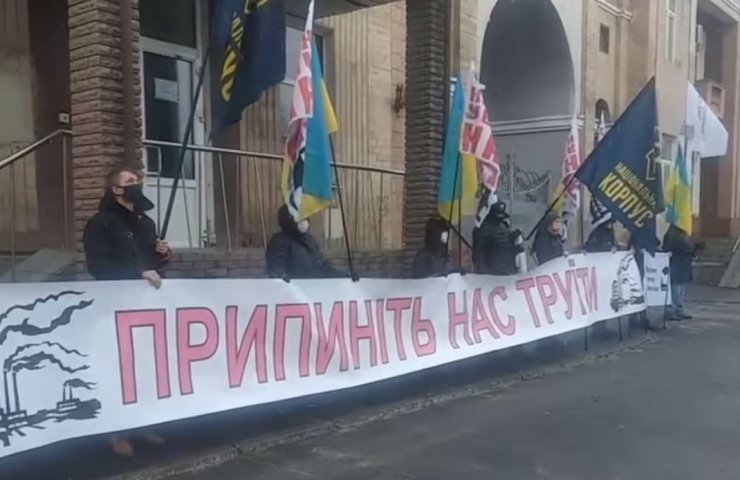 Near the coke plant in Kharkov, residents of nearby houses and activists of the "National Corps " organized a picket. The protesters demand to suspend the activities of the plant and install filters. "If it is impossible to install purification equipment, then the plant should be taken out of the city," protesters say.

For many years now, Kharkiv residents have been holding protest actions, demanding the closure of hazardous production that “poisons people”. The presence of hazardous emissions in the waste of the enterprise - carbon monoxide and nitrogen, sulfur dioxide, was confirmed by the results of laboratory studies.

In December 2020, the Kharkiv Regional Administrative Court suspended the operation of the enterprise until it received permission to release pollutants into the air. However, on January 6, Novomet Coke Plant LLC challenged the court's decision, stating that the technological processes at the enterprise could not be completely stopped and such a shutdown could entail unpredictable consequences, including gas explosions in containers.

Kharkiv Coke Plant (Kharkiv KZ) is the only producer of foundry coke in Ukraine. Mainly Ukrainian coal is used in production. According to the site YouControl , the owner of Novomet Coke Plant LLC is an individual, and the authorized capital of the company is UAH 10,000.

Recommended:
Tesla doubles quarterly sales of electric vehicles far beyond analyst expectations
ArcelorMittal Kryvyi Rih is not ready to increase salaries of employees by 30%
ArcelorMittal Temirtau drone army replenished with three more fighters
On this topic
Dnipro Metallurgical Plant will hold hearings on emissions of dirt into the atmosphere
Yuzhmash told whether it is possible to launch reusable rockets from the Black Sea
Stopped nuclear power plants and mines. What's going on in the energy sector of Ukraine?
The Nikolaev aluminous plant announced that forced the suspension of production
"Ukrenergo" has filed a lawsuit against Minamaneho for delay approval of the investment
A new lawsuit for "Gazprom": what does "Naftogaz" in the Stockholm arbitration?
Add a comment
Сomments (0)
News Analytics
The capacity of the domestic steel market in Ukraine in January-March decreased19-04-2021, 10:33
In Russia, there is an exuberant demand for agricultural machinery19-04-2021, 10:24
Iran is satisfied with the reaction of the world community to 60% enrichment of18-04-2021, 13:24
Gas prices in Ukraine have reached a record value over the past two years -16-04-2021, 17:24
Ukrmetallurgprom asks the Antimonopoly Committee to allow Metinvest to bid for16-04-2021, 17:23
World Steel Association predicts a good year for metallurgists15-04-2021, 18:19
World Steel Association defines green steel and its variations12-04-2021, 13:14
China unlikely to cut steel capacity in 2021 due to high steel prices07-04-2021, 12:11
Scrap metal market at the beginning of April02-04-2021, 11:10
Rising Chinese Prices Fueled Rising Global Steel Prices - MEPS25-03-2021, 18:54
Sign in with: