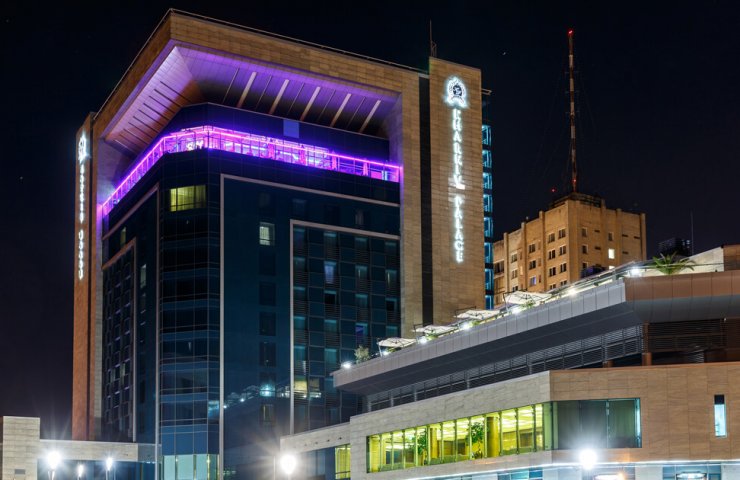 the First legal casino in Kharkiv will be opened in Kharkiv Palace Hotel 5*, which was built by Yaroslavl in the framework of preparations for Euro-2012. His presence in the city was a requirement of UEFA.

the Volume of investments in the construction of the Kharkiv Palace Hotel 5* totaled 126 million. that helped to create the architectural feature through the use of superior materials and advanced design solutions. Room for the casino, acknowledged as one of the best in Europe.

"We waited for 8 years today. Very sad to see that the hotel has guests the opportunity of leisure, and she cannot use it. Many foreign guests have been asking us — why? How could it be that in a five star hotel is such a lovely room for a casino, and the casino no? And it was difficult for us to say something... So we always consistently defended the idea of socially responsible legalize casinos and had a clear road map for how to organize work in this direction", — says General Manager of the hotel Atis, Saharans.

DCH reported that already have an agreement with the relevant operator with international experience, and calculate that the casino at the Kharkiv Palace Hotel 5* work in the shortest possible time.

Alexander Yaroslavsky ranks in the top-10 Ukrainian businessmen according to Forbes-2020. The investment portfolio owned by DCH group includes assets such sectors as Finance, industry, transport, development etc. has Invested more than $ 1 billion. to the economic development of the Kharkiv region. During the preparation of Kharkiv for Euro-2012 was the General investor and coordinator of this process. Due to $ 300 million. investment and organizational effort of Aleksandr Yaroslavskyy in Kharkiv was built a modern airport and a stadium, the first luxury hotel and other related infrastructure.

Финансовая аналитика, прогнозы цен на сталь, железную руду, уголь и другие сырьевые товары. More news and analytics on Metallurgprom telegram channel - subscribe to get up-to-date market information and price forecasts faster than others.
Сomments
Add a comment
Сomments (0)
On this topic
Oleksandr Yaroslavsky, intends to invest in Ukrainian roads $ 300 million
Yuzhmash told whether it is possible to launch reusable rockets from the Black Sea
INTERPIPE has improved its financial results for the 12 months 2019
The Ukrainian "Silicon Valley" will be headed by the owner of the DCH group Alexander
How the reform of the electricity market in Ukraine can lead to a collapse and what to do about it
Chinese technology company ZTE Corporation was the first business resident in the "Ekopolis
Recommended:
China's crude steel production in 2022 falls for the second year in a row
Carriage building plant in Kremenchug stopped production due to debts
S&P: Russia will continue to dominate the steel export market in the Black Sea region
News Analytics
EU Green Deal should encourage investment in mild steel projects: Eurofer02-02-2023, 16:32
Belarusian steel plant to operate at full capacity from February02-02-2023, 16:56
British Steel considers cutting up to 1,200 jobs at Scunthorpe02-02-2023, 11:50
Electric vehicles will play a key role in US aluminum production growth - Norsk01-02-2023, 12:17
The former president of Motor Sich was accused of aiding terrorists01-02-2023, 11:39
European stainless steel producers ready to raise prices31-01-2023, 16:16
S&P: Russia will continue to dominate the steel export market in the Black05-01-2023, 11:22
Fitch Analysts Predict Big Drop in Global Steel Consumption This Year14-12-2022, 13:59
Analysts predict 5% annual growth in the iron casting market through 203006-12-2022, 12:44
Commodity prices will fall, metals quotes will rise slightly - Focus Economics28-11-2022, 13:28
Sign in with: