Ukrainian companies, planning to buy steel in China, paid money and did not receive paid materials, after which they went to court. 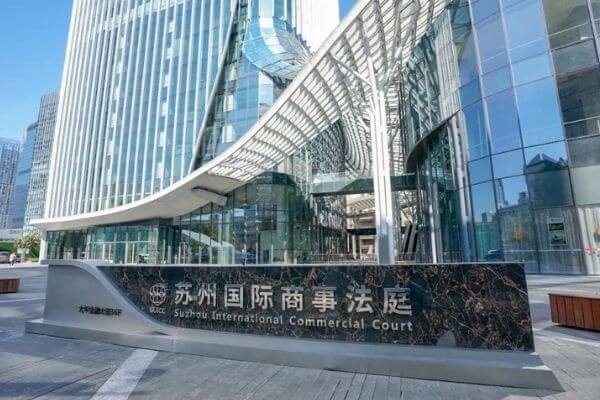 The International Commercial Court of Suzhou, Jiangsu Province (Eastern China) has publicly considered two cases of Ukrainian companies on the recognition and enforcement of foreign arbitral awards and made a positive decision on them. Xinhua reports.

"We express our deep gratitude for the fact that the Chinese court considered the case fairly and efficiently," said Oleg Zinkevich, a confidant of the Ukrainian company, during a video link.

This is the first decision of the Suzhou International Commercial Court to recognize and enforce a foreign arbitral award since its inception at the end of 2020.

The plaintiffs in two cases were reportedly Ukrainian companies, and the defendant was a Suzhou-based materials supply company.

In March 2017, two Ukrainian companies signed contracts with the defendant to purchase coiled steel and made an advance in the amount of USD 79,235 and USD 171,250, respectively. The defendant did not deliver the goods.

Subsequently, the plaintiffs applied to the Suzhou City Middle People's Court for the recognition and enforcement of two arbitral awards rendered by the Ukrainian court in accordance with the provisions of the Convention on the Recognition and Enforcement of Foreign Arbitral Awards (commonly known as the New York Convention).

During the consideration of this case, the focus was on the question of whether the notice of the arbitration court in Ukraine was successfully delivered to the defendant in the city of Suzhou? ", Judge Yang Enqian told reporters.

According to him, the Suzhou International Commercial Court believes that the information and materials provided by the arbitration court in Ukraine were directly sent to the defendant's address, in addition, he signed for their receipt, so the court believes that the delivery was successful.

China and Ukraine are member countries of the New York Convention, so the case had to be considered in accordance with the provisions of this convention. The Suzhou International Commercial Court quickly organized a hearing and delivered a decision within a week of receiving the relevant plaintiffs' submissions. They were notified of the results of the hearing by video link.

"The consideration of this case is evidence that the Chinese justice provides equal protection of the legitimate rights and interests of Chinese and foreign parties, and also demonstrates China's judicial position in respect of compliance with contractual obligations, optimization of commercialization, the rule of law, and internationalization of the business climate," said the head of the International Commercial Court of Suzhou Yu Shuijuan.

Suzhou International Commercial Court is the first international commercial court in China, approved by the Supreme People's Court of the PRC and established on the basis of the local court. Since its inception, it has accepted over 200 cases and ruled on almost 60 of them.

Let us remind you that Chinese investors of Motor Sich PJSC appealed to international arbitration against the state of Ukraine with a demand to pay them 3.5 billion US dollars under an intergovernmental agreement on mutual protection of investments.

President of Ukraine Volodymyr Zelenskyy, by his decree, put into effect the NSDC decision of January 28, 2021, which provides for the application of special economic sanctions against Chinese investors in Motor Sich.

Финансовая аналитика, прогнозы цен на сталь, железную руду, уголь и другие сырьевые товары. More news and analytics on Metallurgprom telegram channel - subscribe to get up-to-date market information and price forecasts faster than others.
Сomments
Add a comment
Сomments (0)
On this topic
Shanghai relocates 5-story school building with a "walking machine" (Video)
Airbus begins supplying A350 aircraft through its hub in China
US imposed export restrictions against Ukraine, Russia, Venezuela and China
USA slapped sanctions on steel industry of Iran
The steel industry, the United States recognized itself the most energy efficient in the world
"Naftogaz" has filed a lawsuit against the government of Ukraine for the issuance of a
Recommended:
Polish manufacturers of steel rebar raise prices due to high costs
Employees of Ukrzaliznytsia mined crypto on service equipment
Purchase of gold products from the company "Basis Gold"
News Analytics
ЕБРР ухудшил прогноз роста экономики Украины на 2023 год с 25% до 8%28-09-2022, 13:57
EU plans additional sanctions against Russian metallurgy27-09-2022, 10:34
The European Commission has approved 5.2 billion euros of state support for27-09-2022, 10:43
China's leading industrial profits fall 2.1% in first 8 months27-09-2022, 10:20
Moody's changed the outlook for the global mining industry to26-09-2022, 19:04
China production cuts in winter will give limited boost to steel markets -15-09-2022, 10:09
Steel prices may rise as manufacturers stop production11-09-2022, 14:06
IREPAS: The global long products market is in a "dramatic situation"10-09-2022, 20:49
Steel prices are unlikely to rise significantly in the near future - analysts02-09-2022, 22:58
Steel prices may move up on new data from China31-08-2022, 12:19
Sign in with: