The Chairman of the State Space Agency of Ukraine met with the Ambassador Extraordinary and Plenipotentiary of Australia to Ukraine. 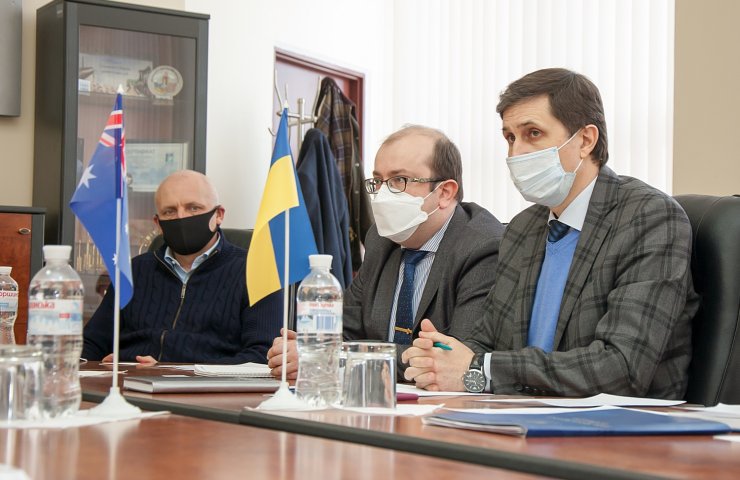 Chairman of the State Space Agency of Ukraine Volodymyr Taftay held a working meeting with the Ambassador Extraordinary and Plenipotentiary of Australia to Ukraine, Mr. Bruce Edwards.

The parties discussed possible areas of cooperation between Ukraine and Australia in the space sector, in particular in the context of the signing by both states of the Agreement within the framework of the Artemis program on the principles of cooperation in civil exploration and the use of the Moon, Mars, comets and asteroids for peaceful purposes.

"Combining the efforts of Ukraine and Australia can increase the contribution of our countries to the large-scale Artemis program," said Volodymyr Taftay.

Special attention was paid to the prospect of practical cooperation of enterprises of the space industry of Ukraine with the Australian company "Cosmovision Global Corporation PTY LTD" in the framework of the project for the construction of a cosmodrome on Cape York Island, Australia, using a space rocket complex, which is planned to be produced at enterprises space sector of Ukraine.

In parting, Volodymyr Taftay suggested that Mr. Bruce Edwards, jointly with the agency and the Australian Embassy in Ukraine, organize an online meeting between space agencies in the near future, which will become the starting point for starting practical cooperation between Ukraine and Australia in the space sector.

Recommended:
In Kiev, the director of one of the plants of the State Corporation "Ukroboronprom" will appear before the court
Austrian OMV stops financing Nord Stream 2 ahead of schedule
DMZ confirmed the compliance of the quality of metal products with European standards
On this topic
The Prime Minister of Ukraine discussed cooperation in space with a colleague from Luxembourg
Krikliy invited Austrian companies to participate in the selection of a manufacturer of electric
Tensions rise between China and Australia over commodity trade
Yuzhmash asks Ukrainian authorities to support the head of the national space Agency
Ukraine will continue the strategy of development of renewable energy sources in the new environment
In Ukraine launched a program for space startups Yangel Big Bang
Add a comment
Сomments (0)
News Analytics
Iran is satisfied with the reaction of the world community to 60% enrichment of18-04-2021, 13:24
Gas prices in Ukraine have reached a record value over the past two years -16-04-2021, 17:24
Ukrmetallurgprom asks the Antimonopoly Committee to allow Metinvest to bid for16-04-2021, 17:23
A fatal accident occurred on the territory of the Dnieper Metallurgical Plant16-04-2021, 13:01
Cars built for Euro 2012 will be repaired at the Kryukov Carriage Works16-04-2021, 12:46
World Steel Association predicts a good year for metallurgists15-04-2021, 18:19
World Steel Association defines green steel and its variations12-04-2021, 13:14
China unlikely to cut steel capacity in 2021 due to high steel prices07-04-2021, 12:11
Scrap metal market at the beginning of April02-04-2021, 11:10
Rising Chinese Prices Fueled Rising Global Steel Prices - MEPS25-03-2021, 18:54
Sign in with: