The Malaysian space program has been developing for many years. In 2002, the country's National Space Agency was founded, and in 2007, Malaysian cosmonaut Muzafar Shukor made his first and so far only flight into space. 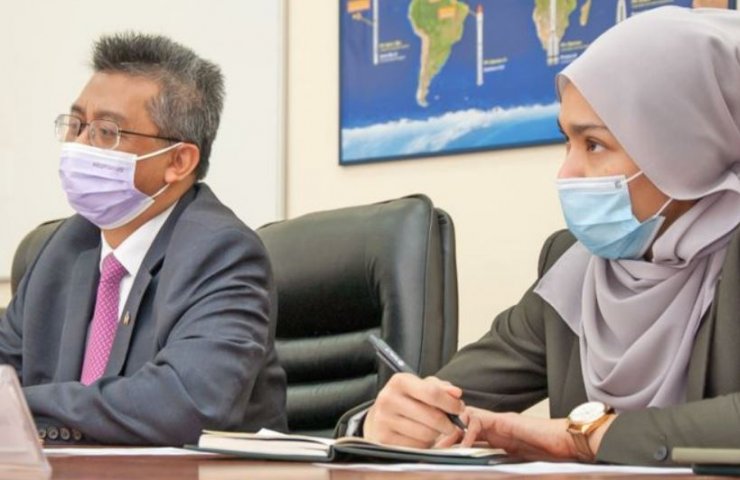 Head of the State Space Agency of Ukraine Vladimir Taftay on Monday, March 15, held a working meeting with the Ambassador Extraordinary and Plenipotentiary of Malaysia to Ukraine Raja Reza Raja Zaib Sha.

The parties exchanged views on the prospects for the development of bilateral cooperation in the space sector.

In addition, the parties discussed the possibility of signing this year between the State Space Agency of Ukraine and the Malaysian Space Agency (MYSA) a Memorandum of Understanding and Cooperation in the Exploration and Use of Outer Space for Peaceful Purposes and noted the importance of supporting cooperation between enterprises of the space sector of Ukraine and Malaysia.

Let us remind you that on March 5 Vladimir Taftay held a working meeting with the Ambassador Extraordinary and Plenipotentiary of Australia to Ukraine, Mr. Bruce Edwards. The parties discussed possible areas of cooperation between Ukraine and Australia in the space sector, in particular in the context of the signing by both states of the Agreement within the framework of the Artemis program on the principles of cooperation in civil exploration and the use of the Moon, Mars, comets and asteroids for peaceful purposes.

Recommended:
For the first quarter of 2021, the seaports of Ukraine handled 32.6 million tons of cargo
Elon Musk's fortune grew by $ 6 billion in a day
Lockdown of the Suez Canal will last until at least April 1: it could drive up steel prices
On this topic
Ukraine and Australia have become one step closer in cooperation in the space sector
The Prime Minister of Ukraine discussed cooperation in space with a colleague from Luxembourg
Krikliy invited Austrian companies to participate in the selection of a manufacturer of electric
Strategy of defense in space
Ukraine will continue the strategy of development of renewable energy sources in the new environment
The Russian space Agency has accused trump of the creation of the basis for seizure of territories
Add a comment
Сomments (0)
News Analytics
Global hydrogen demand to grow 7-fold by 2070 - PwC21-04-2021, 12:31
Energy independence of Ukraine depends on decarbonization and "green" energy -21-04-2021, 12:42
Shell tests hydrogen fuel cells on ships in Singapore21-04-2021, 11:39
Gazprom will continue to develop priority areas of hydrogen energy based on21-04-2021, 10:49
EU approves targets to reduce greenhouse gas emissions by 55% by 203021-04-2021, 10:36
Global hydrogen demand to grow 7-fold by 2070 - PwC21-04-2021, 12:31
World Steel Association predicts a good year for metallurgists15-04-2021, 18:19
World Steel Association defines green steel and its variations12-04-2021, 13:14
China unlikely to cut steel capacity in 2021 due to high steel prices07-04-2021, 12:11
Scrap metal market at the beginning of April02-04-2021, 11:10
Sign in with: