The current contract for the supply of 11 blocks of the main engine is calculated until 2023, the production of another 10 engines will provide Yuzhmash with work for several years to come. 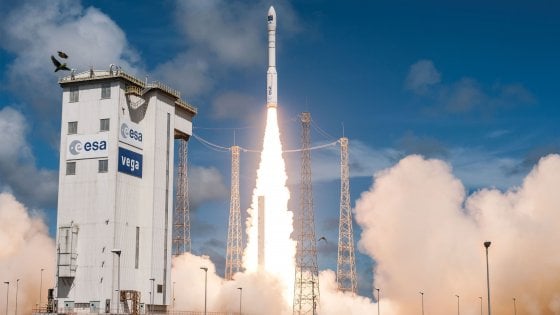 Yuzhnoye Design Bureau, Production Association Yuzhny Machine-Building Plant named after A. Makarova and the Italian company AVIO SpA have reached an agreement on additional supplies of 10 Ukrainian-made engines for the Vega launch vehicle for a total amount of almost 6 million euros.

The Italian side confirmed its readiness to expand cooperation on April 28 this year. Ukrainian Foreign Minister Dmytro Kuleba welcomed this agreement reached by joint efforts of representatives of the Ukrainian rocket and space industry and the Ministry of Foreign Affairs.

“Expansion of participation in the European Vega program testifies to the reliability and competitiveness of engineering developments in the Ukrainian rocket and space industry. High-quality high-tech export develops the Ukrainian economy, provides orders for enterprises, jobs for Ukrainian specialists. The support of such contracts is one of the top priorities of the Foreign Ministry, and the efforts of Ukrainian diplomats in Italy played an important role in reaching this agreement, "he said.

The current contract for the supply of 11 main engine blocks (BMD) is calculated until 2023. Seven units have already been delivered, one more will be shipped to the customer in the near future, three engines are in the production process.

Dmitry Nikon, Chief Economist of SE PA Yuzhny Machine-Building Plant, explained: “The current contract contains an option that provides for the manufacture of additional 10 units. Thanks to the Ukrainian diplomats who kept the deal under control, repeatedly contacted both the company's management and representatives of the Italian Space Agency, which led to a positive result. ”

“Cooperation with AVIO SpA is a clear example of the integration of the Ukrainian rocket and space industry into European space programs. For our part, we are doing everything possible to develop and expand Ukrainian-Italian cooperation in the field of space technologies, and we will be grateful to our diplomats for further support, "said Oleksandr Prokopchuk, Chief Designer of the Liquid Propellant Rocket Engine Design Bureau at Yuzhnoye Design Bureau. p>

The Vega light launch vehicle is a joint project of the European Space Agency and the Italian Space Agency. SE "KB" Yuzhnoye "and SE" PO "Yuzhny Mashinostroitelny Zavod" have been cooperating with the Italian company AVIO SpA under the Vega program since 2004. In total, over the years of cooperation, more than 20 main engine blocks have been manufactured and already delivered to AVIO SpA, the last of which - at the beginning of 2021.

A feature of the BMD is the ability to launch multiple times during flight (up to 5 starts), which ensures the deployment of satellites in different orbits.

The Ukrainian Embassy in Italy is making priority efforts to ensure and encourage cooperation between Ukraine and Italy in the space industry. Italy is one of the founding countries of the European Space Agency and is among the top three contributors along with Germany and France.

Финансовая аналитика, прогнозы цен на сталь, железную руду, уголь и другие сырьевые товары. More news and analytics on Metallurgprom telegram channel - subscribe to get up-to-date market information and price forecasts faster than others.
Сomments
Add a comment
Сomments (0)
On this topic
European space project will provide Ukrainian Yuzhmash with work for the coming years
Yuzhmash told whether it is possible to launch reusable rockets from the Black Sea
Rolls-Royce lost 90 million euros on the sale of the Bergen Engines plant, but did not give it to
Turkey will buy engines for heavy attack helicopters in Ukraine
Max Polyakov's Firefly Aerospace plans two launches of the Alpha space rocket in 2021
French Total took control of 6 Ukrainian solar power plants
Recommended:
The United States imposed a ban on the import and sale of equipment from Huawei, ZTE and a number of other Chinese companies
Volvo starts deliveries of electric trucks made of fossil-free steel
The European Union has sharply increased purchases of Russian titanium
News Analytics
China's iron ore output to rise in 2023 as new projects are launched30-11-2022, 18:10
"Centravis" agreed to supply a new batch of seamless pipes to a30-11-2022, 16:51
Metinvest enterprises in Ukraine resumed work after massive shelling of29-11-2022, 11:59
The European Council added the violation of restrictive measures (sanctions) to28-11-2022, 14:22
The abolition of export duty in India may reduce the price of Turkish steel28-11-2022, 14:07
Commodity prices will fall, metals quotes will rise slightly - Focus Economics28-11-2022, 13:28
Platinum market to face shortage next year - WPIC22-11-2022, 18:25
Global steel demand falls and will fall by 2.3% in 2022: WorldSteel19-10-2022, 23:12
Iron ore prices fall to 11-month low15-10-2022, 10:36
China production cuts in winter will give limited boost to steel markets -15-09-2022, 10:09
Sign in with: