In addition to issues of production, storage and transportation of "green" hydrogen, the companies agreed to cooperate in the production and supply of Ukrainian biomethane to the EU. 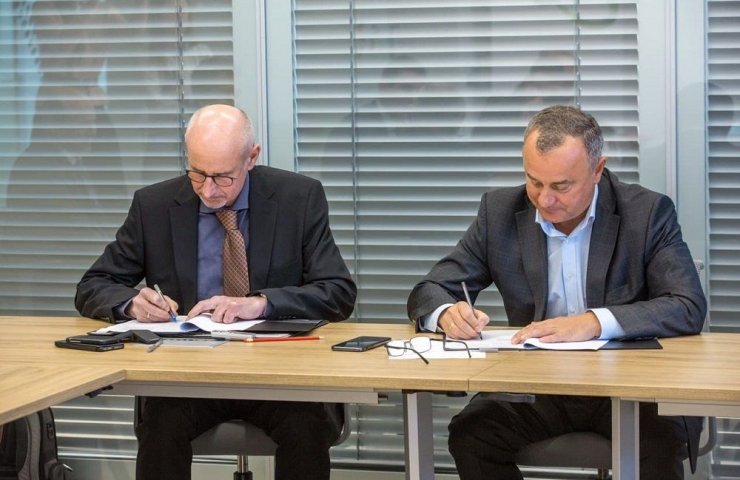 The parties plan to work both on research and implementation of the developed technologies in practice. This will provide an opportunity to get the first pilot projects in Ukraine and the EU, which can then be multiplied in industrial use.

“The technology of biological methanization of“ green ”hydrogen will help to significantly increase the production of“ clean ”energy, reduce greenhouse gas emissions, and replace fossil fuels, including imported ones. These are innovative tendencies that are in line with the European Green Deal and are a prerequisite for the global energy transition, ”said Alexander Dombrovsky, President of MHP Eco Energy, during the official ceremony of signing the memorandum.

The signing of the Memorandum took place among representatives of the State Energy Efficiency of Ukraine, specialized associations and the scientific community.

“It is important that the business of the two countries is already starting cooperation in such urgent innovative areas as the development of a hydrogen economy, the use of biomethane. I am convinced that this is a start for specific developments and pilot projects in these areas. Other companies should follow the example and master the promising areas of the world's energy future, ”said Yuri Shafarenko, Deputy Chairman of the State Energy Efficiency Agency, at the signing ceremony.

The beginning of the partnership is more relevant than ever, because in the summer of 2020 both countries signed the German-Ukrainian Energy Partnership, incl. in hydrogen and "clean" energy.

Hydrogen energy is a promising area for Ukraine, which has been identified as a priority partner of the EU in this area. This is due to the significant potential for the production of "green" hydrogen.

Having all the chances to integrate into the hydrogen plans of Europe, the corresponding work is already underway in Ukraine. The Ministry of Energy, State Energy Efficiency and UNECE, with the active participation of the Ukrainian Hydrogen Council, developed a study of the possibilities of production and use of hydrogen in Ukraine.

Biomethane is another important area for reducing dependence on natural gas. The potential for biomethane production in Ukraine reaches 7.8 billion cubic meters per year. This is more than 30% of the total annual gas consumption in the country.

“Together with BAU, we have developed a draft law to create favorable conditions for the development of the production and use of biomethane in Ukraine, as well as for the export of biomethane to the EU,” explained Y. Shafarenko.

Recommended:
China to cut port and air fees to reduce business burden
The capacity of the domestic steel market in Ukraine in January-March decreased by 6.38%
The first quarter of 2021 did not bring expected production growth to Ukrainian metallurgists
On this topic
Energy holding of Rinat Akhmetov wants to become a leader in the production of "green" hydrogen in
Yuzhmash told whether it is possible to launch reusable rockets from the Black Sea
Air Products and Tyssenkrupp will work together to sell "green" hydrogen
Chinese technology company ZTE Corporation was the first business resident in the "Ekopolis HTZ"
The Parliament of Ukraine adopted the law on the control of greenhouse gas emissions
The European Commission today presented a strategy of "green" transition
Add a comment
Сomments (0)
News Analytics
The capacity of the domestic steel market in Ukraine in January-March decreased19-04-2021, 10:33
In Russia, there is an exuberant demand for agricultural machinery19-04-2021, 10:24
Iran is satisfied with the reaction of the world community to 60% enrichment of18-04-2021, 13:24
Gas prices in Ukraine have reached a record value over the past two years -16-04-2021, 17:24
Ukrmetallurgprom asks the Antimonopoly Committee to allow Metinvest to bid for16-04-2021, 17:23
World Steel Association predicts a good year for metallurgists15-04-2021, 18:19
World Steel Association defines green steel and its variations12-04-2021, 13:14
China unlikely to cut steel capacity in 2021 due to high steel prices07-04-2021, 12:11
Scrap metal market at the beginning of April02-04-2021, 11:10
Rising Chinese Prices Fueled Rising Global Steel Prices - MEPS25-03-2021, 18:54
Sign in with: