Lviv Armored Plant handed over to the Ministry of Defense of Ukraine a new batch of modernized T-64 and T-72 tanks in full combat readiness. 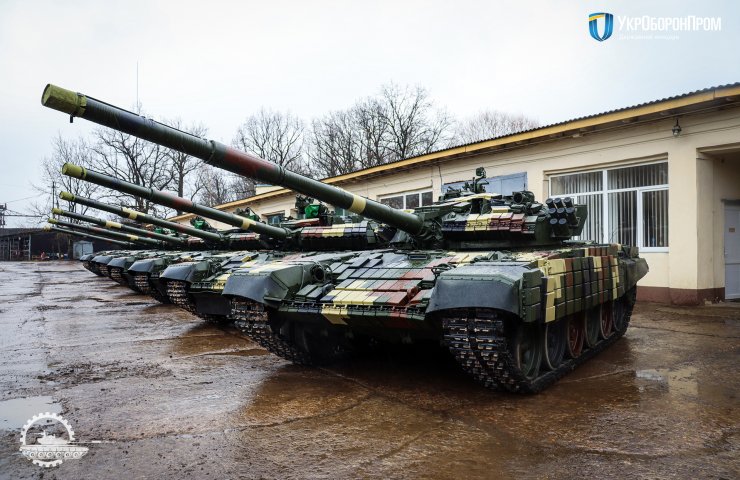 The State Enterprise "Lviv Armored Plant", which is part of the state concern "Ukroboronprom", handed over to the Ministry of Defense of Ukraine a new batch of modernized T-64 and T-72 tanks.

“The tanks have undergone major repairs and deep modernization. We took into account all the wishes of the customer, - says the director of the enterprise Viktor Androshchuk. - The equipment was transferred in full combat readiness. It is equipped with the most modern communication and fire control systems, day and night vision devices, rear-view cameras, smoke grenade systems and dynamic protection against cumulative shells. Part of the batch has already been shipped to combat units, the rest are waiting for this. ”

Mr. Androshchuk also noted that the plant continues to send mobile repair teams to the Operations zone and to the locations of armored vehicles. For two months of this year, they have restored more than ten combat vehicles.

“The task of the enterprises - members of the concern is to meet the needs of the Armed Forces of Ukraine in high-quality military equipment. The Lviv Armored Plant continues to fulfill orders in a timely manner, increasing its combat capability, ”says Yuriy Gusev, General Director of Ukroboronprom.

Since the beginning of 2021, the state enterprise has modernized more than ten T-64 and T-72 vehicles. The order was completed ahead of schedule and for limited funding due to the lack of a state defense order for this year.

Recommended:
Sanjeev Gupta's first three steel plants go bankrupt
In 2020, Gazprom increased its proven gas reserves by 480 billion cubic meters
Lockdown of the Suez Canal will last until at least April 1: it could drive up steel prices
On this topic
A program to develop a heavy shock-reconnaissance drone has started in Ukraine
17 enterprises will be withdrawn from Ukroboronprom
"Ukroboronprom" introduces to "Antonov" Supervisory Board
Strategy of defense in space
In Ukraine created the working group on the revival of domestic aviation industry
American tanks Abrams and BMP Bradley appeared on the border with Belarus
Add a comment
Сomments (0)
News Analytics
The capacity of the domestic steel market in Ukraine in January-March decreased19-04-2021, 10:33
In Russia, there is an exuberant demand for agricultural machinery19-04-2021, 10:24
Iran is satisfied with the reaction of the world community to 60% enrichment of18-04-2021, 13:24
Gas prices in Ukraine have reached a record value over the past two years -16-04-2021, 17:24
Ukrmetallurgprom asks the Antimonopoly Committee to allow Metinvest to bid for16-04-2021, 17:23
World Steel Association predicts a good year for metallurgists15-04-2021, 18:19
World Steel Association defines green steel and its variations12-04-2021, 13:14
China unlikely to cut steel capacity in 2021 due to high steel prices07-04-2021, 12:11
Scrap metal market at the beginning of April02-04-2021, 11:10
Rising Chinese Prices Fueled Rising Global Steel Prices - MEPS25-03-2021, 18:54
Sign in with: