Antonov Airlines performed six flights to transport equipment for the production of a vaccine against COVID-19. 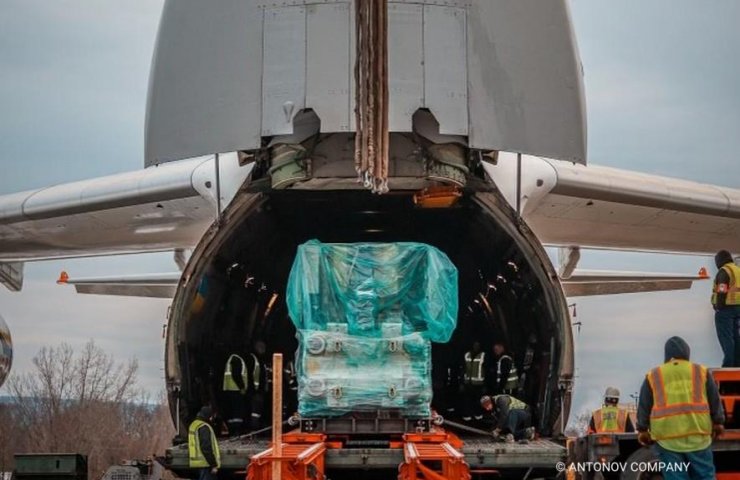 In particular, in order to safely deliver cargo on one of the flights, due to heavy snowfalls, it was necessary to change the airport of arrival from Baltimore to Stuart International Airport, New York.

An-124-100 aircraft with a carrying capacity of 150 tons were involved in the transportation of vehicles, each of which weighs 100 tons. Loading and unloading was carried out using cranes and special equipment developed by the engineers of Antonov Airlines.

An order for the transportation of vaccine production equipment came from DHL Global Forwarding.

As noted by her chief international transport manager Christopher Klein:

“These charter flights became a big project that we carried out together with Antonov Airlines, fully fulfilling the wishes of the customer. Over the past several months, there have been a number of challenges related to the blizzard on the east coast of the United States that needed to be overcome. In particular, this led to the fact that one day we had to quickly change the destination airport. ”

“We are proud to have our airline play a key role in the global fight against coronavirus. The flights performed have become another contribution to this important cause. ”

Recommended:
For the first quarter of 2021, the seaports of Ukraine handled 32.6 million tons of cargo
China will accelerate the digitalization of industrial production
Liberty Steel plans to resume production in the UK next week
On this topic
Specialists of SE "Antonov" ensured the urgent transfer of mining equipment from Australia to Brazil
What is billionaire Yaroslavsky building at the Dnipro airport?
Yuzhmash told whether it is possible to launch reusable rockets from the Black Sea
The Ukrainian "Ruslans" delivering supplies to combat coronavirus
Guide Dreamlifts Ltd decided not to renew the cooperation with the Antonov company
In ANTONOV commented on the incident with An-124 at the airport of Ostend
Add a comment
Сomments (0)
News Analytics
Electrotyazhmash was allowed to overhaul the rolling stock of Ukrzaliznytsia21-04-2021, 16:17
Dniprostal-Energo initiates an auction for the purchase of electricity on the21-04-2021, 16:08
Zaporizhstal donated a new oxygen station to the Zaporizhzhya Regional21-04-2021, 15:11
Brazil is interested in the production capabilities of Yuzhmash21-04-2021, 14:35
Energoatom ordered a condenser from Turboatom worth 0.5 billion hryvnia for21-04-2021, 14:28
Global hydrogen demand to grow 7-fold by 2070 - PwC21-04-2021, 12:31
World Steel Association predicts a good year for metallurgists15-04-2021, 18:19
World Steel Association defines green steel and its variations12-04-2021, 13:14
China unlikely to cut steel capacity in 2021 due to high steel prices07-04-2021, 12:11
Scrap metal market at the beginning of April02-04-2021, 11:10
Sign in with: