Dneprovsk Metallurgical Plant uses an innovative for Ukraine technology of ceramic welding of seams of coking chambers, which increases the efficiency of furnaces. 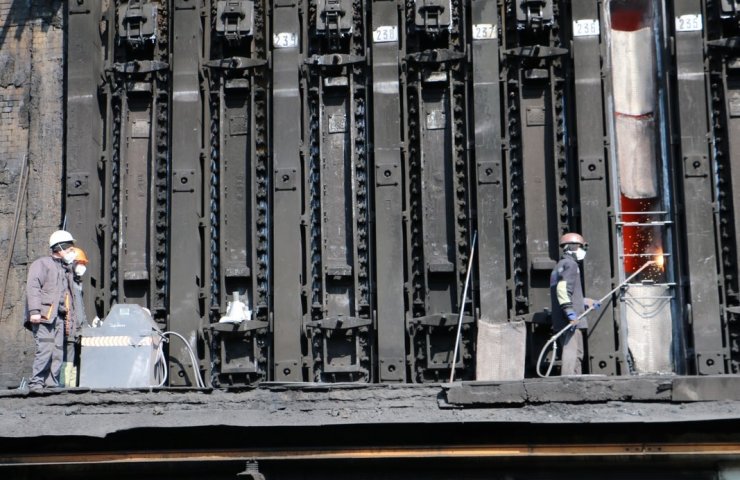 Oleksandr Yaroslavskyi's Dneprovsky Metallurgical Plant of DCH Group continues to implement a large investment project, within the framework of which repairs are carried out at the by-product coke plant. A unique technology is used - ceramic surfacing. The result is improved coke quality and reduced environmental impact.

In March, work began on coke oven battery No. 2. During the repair, ceramic surfacing and sealing of heating wall masonry joints will be performed. This is a new technology for Ukraine, which has proven its effectiveness at European enterprises. Surfacing provides a better sealing of the seams of coking chambers, which increases the efficiency of the furnaces and reduces the burden on the environment.

The joints of the refractory masonry are first melted, and then a thermal mixture is blown into the coking chamber under pressure. Seams and possible cracks are sealed to prevent suction. As a result, the raw gas from the chamber does not enter the heating system, but is completely returned to heat the walls.

“Dnipro Metallurgical Plant is constantly working to reduce the technogenic load on the environment. Ceramic surfacing of coke oven batteries is a unique technology that has been introduced at a number of foreign enterprises and has proven its effectiveness. The works are planned at coke oven batteries No. 1 and 2, which will give a significant environmental and production effect, "- said Vitaly Bash, General Director of DMZ.

Recommended:
Converter # 1 started working at Azovstal after major overhaul
Elon Musk's fortune grew by $ 6 billion in a day
The government of Ukraine has taken the first step to integrate SE "VostGOK" into the structure of Energoatom
On this topic
Unique technology is being introduced at the metallurgical plant of Alexander Yaroslavsky
DMZ reduced air emissions by one third
"Zaporozhkoks" implements the program of modernization of coke oven batteries
The Dnieper metallurgical plant restarts steelmaking
Zaporizhkoks completed the reconstruction of coke oven batteries No. 5-6
To reduce emissions "ArcelorMittal Kryvyi Rih" has used an innovative method of repair of coke oven
Add a comment
Сomments (0)
News Analytics
Gas prices in Ukraine have reached a record value over the past two years -16-04-2021, 17:24
Ukrmetallurgprom asks the Antimonopoly Committee to allow Metinvest to bid for16-04-2021, 17:23
A fatal accident occurred on the territory of the Dnieper Metallurgical Plant16-04-2021, 13:01
Cars built for Euro 2012 will be repaired at the Kryukov Carriage Works16-04-2021, 12:46
Novokramatorsk Machine-Building Plant has raised wages for the second time16-04-2021, 12:54
World Steel Association predicts a good year for metallurgists15-04-2021, 18:19
World Steel Association defines green steel and its variations12-04-2021, 13:14
China unlikely to cut steel capacity in 2021 due to high steel prices07-04-2021, 12:11
Scrap metal market at the beginning of April02-04-2021, 11:10
Rising Chinese Prices Fueled Rising Global Steel Prices - MEPS25-03-2021, 18:54
Sign in with: