Entering new markets is one of the key directions of the company, approved in the framework of the adopted Development Strategy of Corum Group until 2030. 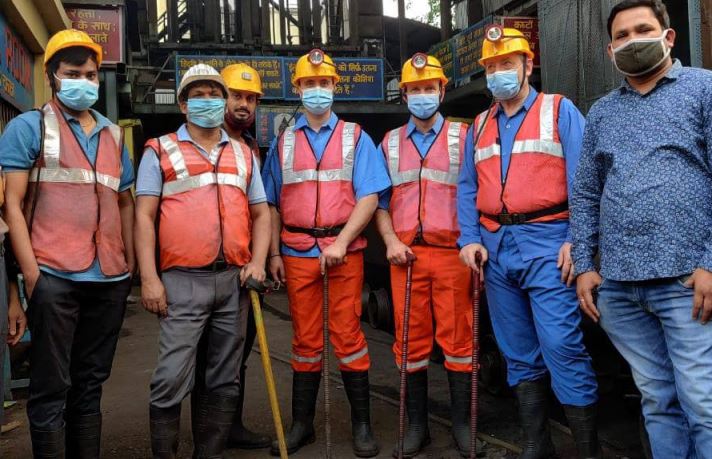 The Corum Group delegation paid a working visit to India. The main objectives of the trip were to establish cooperation with local mining companies and establish partnerships with large local dealers for the supply of mining equipment.

The dynamically developing Indian market in the field of coal and other minerals mining is the key to the success of possible cooperation, therefore, finding ways to establish strategic partnerships with Indian mining companies is a serious challenge for Corum Group.

"India is an important global player in the mining industry, and therefore it is of particular interest for cooperation - both in terms of supply of mining and tunneling equipment, as well as the provision of services for mine construction and infrastructure equipment", - says Mikhail Potapov, General Director Corum Group. - Focusing on modern global business models, Corum Group offers effective and safe integrated solutions - from technology development to production and service of equipment. We believe that for Indian companies we will be able to become a reliable partner, integrated into the client's business, and sharing responsibility for the end result of the work. "

Corum has deep expertise in the production of equipment for coal mining and mine construction, proven by many years of experience not only of Ukrainian miners, but also of mining enterprises in other countries. Thanks to its own developed R&D center and the use of innovative technologies, Corum adapts the equipment to the client's requirements, providing individual solutions for maximum equipment performance under the given conditions.

“India is demonstrating a steady demand for growth in its own coal production due to the explosive increase in energy consumption, and a steady demand for the products of the metallurgical sector,” said Mikhail Lysenko, project management manager at Corum Group. “That is why Corum views this country as a promising market, where we can show the efficiency of the MGK at the existing mines and help increase production.”

During the visit, a meeting was held with the Ambassador of Ukraine to the Republic of India and the staff of the Embassy, ​​during which they discussed prospects and areas of cooperation, which will strengthen the Ukrainian-Indian partnership and increase the volume of bilateral trade. This will have a beneficial effect on the coal mining industries of both countries.

To strengthen the position of Corum Group, and a practical understanding of the Indian market, Andrey Mironov was appointed as the head of the department.

Andrey Mironov has over 20 years of experience in the Indian market. From 2002 to 2008, he led the Tehri hydropower project in India. From 2008 to 2012, he headed sales to the Indian market at Power Machines, and from 2013 to 2019, he headed the Indian branch of P.G. Korobkov ”- a manufacturer of mining excavators.

“Mining enterprises in India are experiencing the need to switch to mechanized coal mining in longwalls with suitable mining and geological conditions. The Corum Group is an expert in coal mining equipment and mine construction. As part of achieving strategic goals in terms of increasing exports of products, Corum Group plans to start supplying its equipment and services to a number of Indian companies. First of all, we are talking about cleaning and tunneling equipment, and mine construction services, ”emphasized Andrei Mironov, head of the Indian market.

Финансовая аналитика, прогнозы цен на сталь, железную руду, уголь и другие сырьевые товары. More news and analytics on Metallurgprom telegram channel - subscribe to get up-to-date market information and price forecasts faster than others.
Сomments
Add a comment
Сomments (0)
On this topic
Corum Group presented a modern mining mechanized complex
Corum Group of Rinat Akhmetov and the Czech investment company signed a Memorandum of cooperation
Corum Group DTEK Energy fulfilled a large order for Poland
At CorumExpo presented the first Ukrainian harvester for coal mining in ultra-thin seams
The largest manufacturer of mining equipment in Ukraine Corum Group enters the Turkish market
The largest project in the history of independent Ukraine in the mining and metallurgical industry
Recommended:
Mining enterprises of Ukraine reduced the export of iron ore by 38.9%
Metinvest enterprises in Ukraine resumed work after massive shelling of infrastructure
The owner of the Dnipro iron and steel works commented on reports of absentee arrest in the Russian Federation
News Analytics
China's iron ore output to rise in 2023 as new projects are launched30-11-2022, 18:10
"Centravis" agreed to supply a new batch of seamless pipes to a30-11-2022, 16:51
Metinvest enterprises in Ukraine resumed work after massive shelling of29-11-2022, 11:59
The European Council added the violation of restrictive measures (sanctions) to28-11-2022, 14:22
The abolition of export duty in India may reduce the price of Turkish steel28-11-2022, 14:07
Commodity prices will fall, metals quotes will rise slightly - Focus Economics28-11-2022, 13:28
Platinum market to face shortage next year - WPIC22-11-2022, 18:25
Global steel demand falls and will fall by 2.3% in 2022: WorldSteel19-10-2022, 23:12
Iron ore prices fall to 11-month low15-10-2022, 10:36
China production cuts in winter will give limited boost to steel markets -15-09-2022, 10:09
Sign in with: