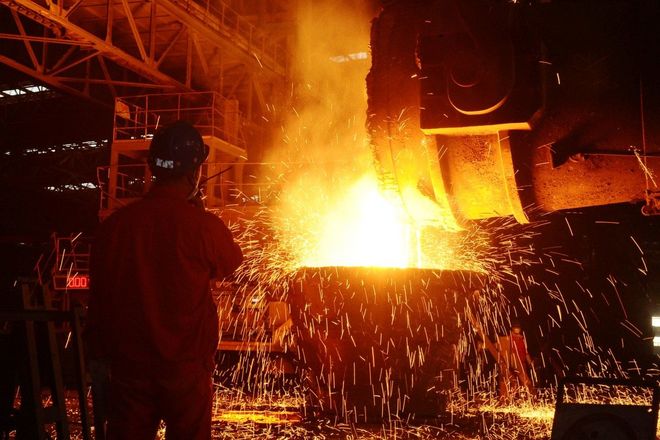 Dnieper Metallurgical Plant (DMK) in March 2021 produced 222 661 tons of commercial metal products, which is 88% of the plan, according to the economic planning department of the plant.

We did not cope with the tasks in the agglomeration, blast-furnace and converter shops, their indicators:

According to the results of the first quarter, distributors produced 211,034 tons of products, which is 28,455 tons more than the plan.

The volume of shipment of commercial metal products did not reach one hundred percent and amounted to 640,254 tons, which is 36,624 tons (5.4%) less than the plan for the first quarter of this year.

Финансовая аналитика, прогнозы цен на сталь, железную руду, уголь и другие сырьевые товары. More news and analytics on Metallurgprom telegram channel - subscribe to get up-to-date market information and price forecasts faster than others.
Сomments
Add a comment
Сomments (0)
On this topic
Dnipro Metallurgical Plant exceeded the April production plan by 6.7%
Dniprovsky Metallurgical Plant did not fulfill the planned target for the production of metal
Dneprovsk Iron and Steel Works did not fulfill the production targets planned for February
Dnipro Metallurgical Plant at the end of 2020 worked ahead of schedule
Dnipro Steel Works in May exceeded the plan for the production of rolled metal by 10%
Dnipro Metallurgical Plant exceeded the plan for steel production in January
Recommended:
Electric vehicles will play a key role in US aluminum production growth - Norsk Hydro
UK is ready to give 300 million pounds to save British Steel
Ukraine arrested Russian metallurgical assets
News Analytics
EU Green Deal should encourage investment in mild steel projects: Eurofer02-02-2023, 16:32
Belarusian steel plant to operate at full capacity from February02-02-2023, 16:56
British Steel considers cutting up to 1,200 jobs at Scunthorpe02-02-2023, 11:50
Electric vehicles will play a key role in US aluminum production growth - Norsk01-02-2023, 12:17
The former president of Motor Sich was accused of aiding terrorists01-02-2023, 11:39
European stainless steel producers ready to raise prices31-01-2023, 16:16
S&P: Russia will continue to dominate the steel export market in the Black05-01-2023, 11:22
Fitch Analysts Predict Big Drop in Global Steel Consumption This Year14-12-2022, 13:59
Analysts predict 5% annual growth in the iron casting market through 203006-12-2022, 12:44
Commodity prices will fall, metals quotes will rise slightly - Focus Economics28-11-2022, 13:28
Sign in with: