Metinvest to spend about $30 billion on steel production decarbonization

The company will stop steel production in blast furnaces and iron sintering by 2050, which will reduce carbon dioxide emissions by 90% to less than 2.5 million tons per year. 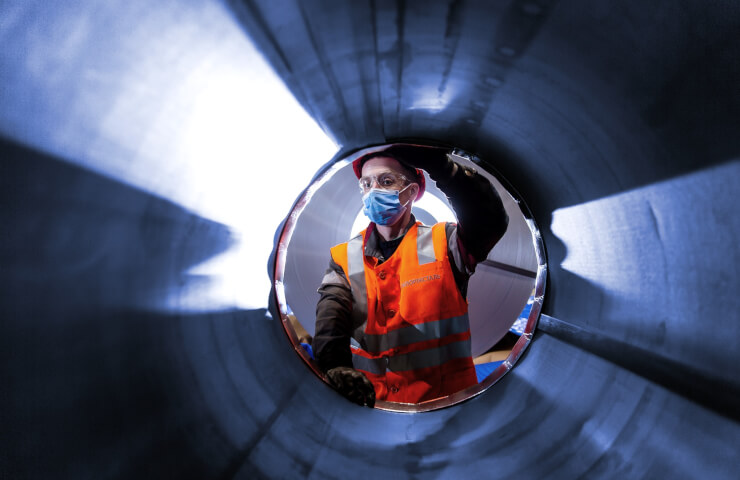 Netherlands mining and metallurgical company Metinvest B.V. (Metinvest) intends to produce all its steel in electric furnaces using direct reduced iron by 2050 as part of the phase-out of sinter and coke, which will reduce greenhouse gas emissions by 90% compared to current levels, said in interview S&P Global Platts Metinvest CEO Yuri Ryzhenkov.

Metinvest, which accounted for 45% (9.5 million tons) of steel production in Ukraine in 2021, is finalizing its decarbonization roadmap to be released this spring. The company will also finalize its technology strategy by the end of 2022.

In broad terms, Metinvest intends to replace most of its blast furnaces and BOFs with electric arc furnaces by 2040, Ryzhenkov said in an interview with Platts.

At the same time, the company's coking coal assets will remain part of its decarbonization plan, as Metinvest will continue to need coal for its sinter operations until the blast furnaces are decommissioned.

"Because we are not sure hydrogen will be economically available at this time, the new facility will initially run on natural gas, but CO2 emissions will still be significantly reduced," Ryzhenkov said, adding that the company is still deciding where to locate the first object - at Azovstal or at the plant named after Ilyich, both in Mariupol.

Metinvest, which has already invited major equipment manufacturers to submit proposals, will conduct a feasibility study during January-June and select a site for the first complex by the end of the year.

In the next few years, Metinvest will create a capacity for the production of DR pellets with a capacity of 5 million tons per year at the Northern GOK, also in Dnepropetrovsk. The capacity of two GOKs should be enough to power the first DRI module by the time it is launched.

To achieve the above, Metinvest expects an annual capital investment of $1.3-1.5 billion over the next 3-4 years, with further investment dependent on its progress towards green metallurgy.

This transition is intended to help Metinvest achieve its strategic goal of reducing greenhouse gas emissions by more than 90% by 2050. At this stage, the company does not indicate a baseline for this reduction. But if it is 2020, emissions could fall below 2.5 million tons per year, Platts estimates.

Финансовая аналитика, прогнозы цен на сталь, железную руду, уголь и другие сырьевые товары. More news and analytics on Metallurgprom telegram channel - subscribe to get up-to-date market information and price forecasts faster than others.
Сomments
Add a comment
Сomments (0)
On this topic
Metinvest achieves full self-sufficiency in coking coal
Global scrap prices continue to rise - S&P Global Platts
Metinvest intends to invest another $ 413 million in environmental projects in Ukraine
Swedish state-owned mining company to switch to hydrogen for DRI production
Specialists of the Chinese company CISDI will spend three months at ArcelorMittal Kryvyi Rih
Yuzhmash told whether it is possible to launch reusable rockets from the Black Sea
Recommended:
Steel production in China rose in the first decade of January
The converter shop of the steel plant in Kamensky, Dnepropetrovsk region, resumed work
China's crude steel production in 2022 falls for the second year in a row
News Analytics
European steel price rise that began in January will be short-lived - MEPS26-01-2023, 14:44
Steel production in China rose in the first decade of January26-01-2023, 12:30
UK is ready to give 300 million pounds to save British Steel20-01-2023, 21:31
Carriage building plant in Kremenchug stopped production due to debts20-01-2023, 21:11
Europe's passenger car market records its worst year since the turn of the20-01-2023, 21:03
S&P: Russia will continue to dominate the steel export market in the Black05-01-2023, 11:22
Fitch Analysts Predict Big Drop in Global Steel Consumption This Year14-12-2022, 13:59
Analysts predict 5% annual growth in the iron casting market through 203006-12-2022, 12:44
Commodity prices will fall, metals quotes will rise slightly - Focus Economics28-11-2022, 13:28
Platinum market to face shortage next year - WPIC22-11-2022, 18:25
Sign in with: