Greening the Planet Eco-Initiative is being held for the second year in a row. The regional coordinator in the Zaporozhye region was the Social Initiatives of Business charitable foundation. 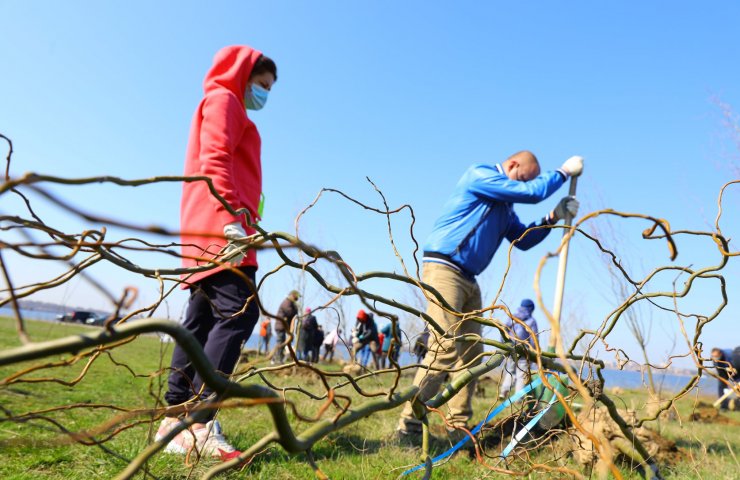 Metinvest enterprises in Zaporozhye - Zaporizhstal, Zaporozhkoks, Zaporozhgneupor and Zaporozhye Foundry and Mechanical Plant - and the Zaporozhye office of the public organization Green Center Metinvest took part in the global eco-initiative Greening the Planet, which was launched on April 10 ... Metinvest volunteers planted 400 willow and linden saplings in the Zaporozhye Zavodskoy district.

The participants of the action observed the mask regime and adhered to social distance. They were also provided with access to antiseptics.

Greening the Planet Eco-Initiative is being held for the second year in a row. The regional coordinator in the Zaporozhye region was the Social Business Initiatives charitable foundation. In 2020, the greening initiative covered the whole of Ukraine, and in 2021 it went far beyond the borders of the country. Taking into account the tightening of quarantine standards, the eco-initiative took place in the format of individual landings.

Recommended:
Uralvagonzavod put into operation 334 units of new equipment in 2020
Electric vehicles accounted for 5.7% of all new cars sold in Europe in the first quarter
Ukrzaliznytsia will check its suppliers in connection with the disruption of diesel fuel supplies
On this topic
Zaporizhstal exported about 900 thousand tons of rolled metal along the Dnieper
"Metinvest " with affiliated companies became the owner of 100% of "Zaporozhogneupor " shares as a
ArcelorMittal Kryvyi Rih provided almost half of the demand for rolled metal for the construction
"Zaporozhgneupor" modernizes gas cleaning equipment
400 students and students of specialized educational institutions will undergo practical training
Experts confirmed the high level of environmental safety of the pond-evaporator plant in utlyukskom
Add a comment
Сomments (0)
News Analytics
Объемы заготовки металлолома в Украине увеличились на 30,3%06-05-2021, 19:19
Gold rises above $ 1,800 an ounce for the first time since February06-05-2021, 18:41
The European Union approved the use of mealworms06-05-2021, 14:40
The mining and metallurgical complex of Ukraine requires more than $ 10 billion06-05-2021, 13:57
Rinat Akhmetov's fortune during the pandemic grew 2.7 times from 2.8 to 7.606-05-2021, 10:21
The current state of the market is ideal for the sale of rolled steel - IREPAS04-05-2021, 18:41
Global hydrogen demand to grow 7-fold by 2070 - PwC21-04-2021, 12:31
World Steel Association predicts a good year for metallurgists15-04-2021, 18:19
World Steel Association defines green steel and its variations12-04-2021, 13:14
China unlikely to cut steel capacity in 2021 due to high steel prices07-04-2021, 12:11
Sign in with: