On April 15, four carriages of an interregional locomotive-hauled train arrived at Kryukovsky Carriage Building, which will undergo scheduled depot repairs. 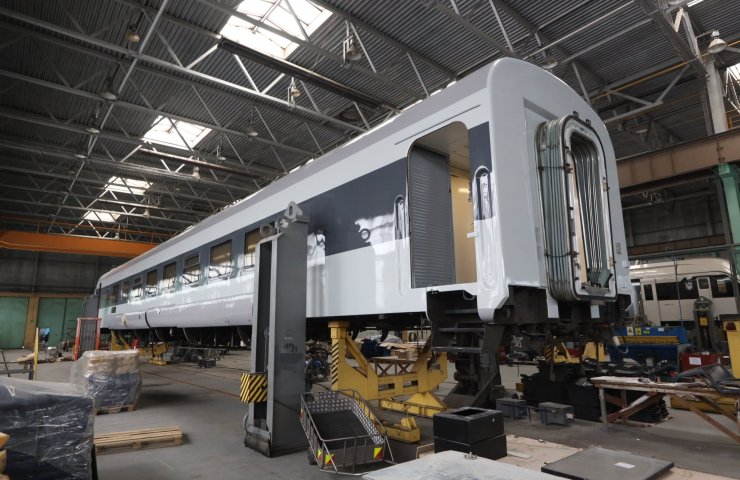 Four cars of the interregional locomotive traction train (MPLT) will be repaired at the Kryukov Carriage Works (KVSZ), the press service of the plant reported on Friday.

Repairs will be carried out by order of JSC "Ukrzaliznytsia". As the Deputy Director for Sales and Marketing Yury Brusnik told us, it is planned to complete the work and transfer the cars to UZ in the first ten days of July this year.

He also added that another car from this train is undergoing scheduled overhaul at the enterprise. So, all five wagons will be dispatched in summer.

Recall that the cars for interregional locomotive-hauled trains were designed and manufactured at KVSZ by order of Ukrzaliznytsia for Euro 2012. In terms of comfort and equipment, they do not differ from the cars of high-speed electric trains. However, MPLT is much cheaper than electric trains.

A nine-car interregional locomotive traction train began operating on the Kiev-Kharkov route in April 2012, even before the Hyundai electric trains arrived in Ukraine. Subsequently, one more car (headquarters) was released and two trains of 5 cars each were created - a total of 10 cars were made.

Финансовая аналитика, прогнозы цен на сталь, железную руду, уголь и другие сырьевые товары. More news and analytics on Metallurgprom telegram channel - subscribe to get up-to-date market information and price forecasts faster than others.
Сomments
Add a comment
Сomments (0)
On this topic
Uz with EBRD assistance will repair the TRANS-European transport corridor
EU stops financing new cross-border oil and gas projects
Yuzhmash signed a memorandum of cooperation with the Saudi company National Building &
"Metinvest " with affiliated companies became the owner of 100% of "Zaporozhogneupor
Volvo to offer customers a full range of electric trucks in 2021
Ukrainian industrialists to talk about the benefits of Industry 4.0 at Trans4mation week online
Recommended:
Donetsk and Torez electrotechnical plants will start producing electrical substations from Chuvash parts
China production cuts in winter will give limited boost to steel markets - Platts
UK steel production hits record low this year
News Analytics
British Steel owner asks government for financial support05-10-2022, 13:05
The price of gold crossed the mark of 1700 dollars05-10-2022, 13:28
US coal prices top $20004-10-2022, 10:16
Tata Steel merger plan to secure long-term profits03-10-2022, 10:46
US hydrogen prices to drop to zero dollars per kg in 5 to 6 years: Platts02-10-2022, 21:53
China production cuts in winter will give limited boost to steel markets -15-09-2022, 10:09
Steel prices may rise as manufacturers stop production11-09-2022, 14:06
IREPAS: The global long products market is in a "dramatic situation"10-09-2022, 20:49
Steel prices are unlikely to rise significantly in the near future - analysts02-09-2022, 22:58
Steel prices may move up on new data from China31-08-2022, 12:19
Sign in with: