For the third time in a row, the employees of PJSC "ArcelorMittal Kryvyi Rih" go to a protest rally demanding a 30 percent increase in wages and the creation of safe working conditions. 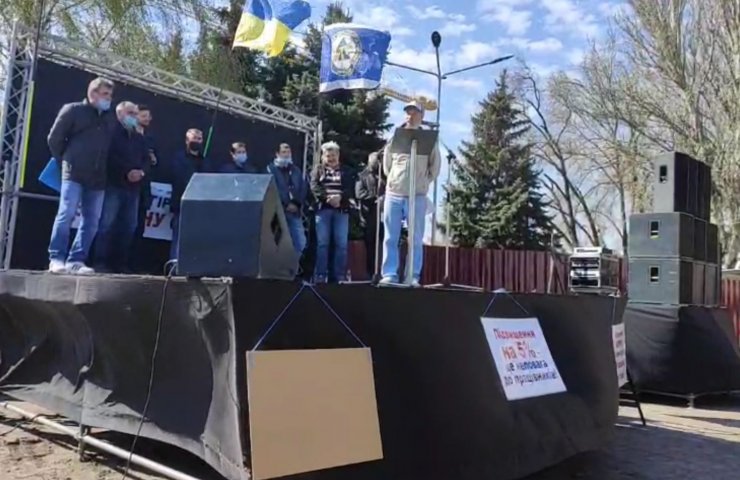 This morning, April 29, employees of the enterprise "ArcelorMittal Kryvyi Rih" went to a protest action. Hundreds of Kryvyi Rih residents demand that the management raise their wages by 30% and improve working conditions. Representatives of several trade union organizations of Arcelor are participating in the action.

Last week, AMKR employees also attended a rally. They signed a resolution of the rally, which gave the leadership until April 28 to fulfill their demands.

One of them is to raise wages by 30%, because, according to the employees of the enterprise, the last time they received a wage increase was in 2019.

Previously it was reported that the largest the mining and metallurgical enterprise of Ukraine, from May 1, increases the salaries of all its employees and employees of its subsidiaries by 5%. In addition, a differentiated salary increase is planned for those categories of workers whose wages are below the market median.

"A 5% increase in salaries is disrespectful to workers," said the workers of the metallurgical plant.

Финансовая аналитика, прогнозы цен на сталь, железную руду, уголь и другие сырьевые товары. More news and analytics on Metallurgprom telegram channel - subscribe to get up-to-date market information and price forecasts faster than others.
Сomments
Add a comment
Сomments (0)
On this topic
ArcelorMittal Kryvyi Rih is not ready to increase salaries of employees by 30%
State Environmental Inspection in Court Demands to Stop Construction of New Tailings Dump at
ArcelorMittal Kryvyi Rih management and trade unions agreed to come to an agreement
ArcelorMittal Kryvyi Rih will raise salaries by 10% in two stages if it receives the consent of the
ArcelorMittal Kryvyi Rih increases salaries of its employees
The head of "ArcelorMittal Kryvyi Rih" joined the Board of the European Business
Recommended:
The European Union has sharply increased purchases of Russian titanium
Mining enterprises of Ukraine reduced the export of iron ore by 38.9%
Metinvest intends to receive compensation from Russia for the destroyed plants in Mariupol
News Analytics
China's iron ore output to rise in 2023 as new projects are launched30-11-2022, 18:10
"Centravis" agreed to supply a new batch of seamless pipes to a30-11-2022, 16:51
Metinvest enterprises in Ukraine resumed work after massive shelling of29-11-2022, 11:59
The European Council added the violation of restrictive measures (sanctions) to28-11-2022, 14:22
The abolition of export duty in India may reduce the price of Turkish steel28-11-2022, 14:07
Commodity prices will fall, metals quotes will rise slightly - Focus Economics28-11-2022, 13:28
Platinum market to face shortage next year - WPIC22-11-2022, 18:25
Global steel demand falls and will fall by 2.3% in 2022: WorldSteel19-10-2022, 23:12
Iron ore prices fall to 11-month low15-10-2022, 10:36
China production cuts in winter will give limited boost to steel markets -15-09-2022, 10:09
Sign in with: