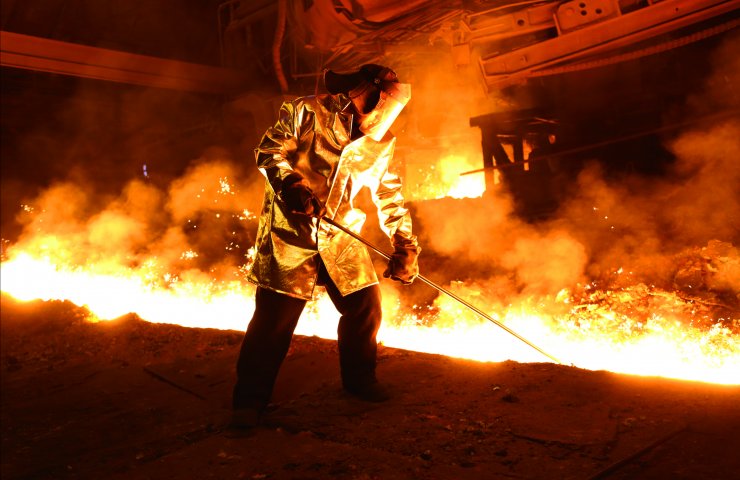 ArcelorMittal Kryvyi Rih, the largest mining and metallurgical enterprise in Ukraine, has been increasing the salaries of all its employees and employees of its subsidiaries by 5% since May 1. In addition, a differentiated increase in salaries is planned for those categories of workers whose wages are below the market median. These categories are determined on the basis of a comparative analysis of the wage market of Ukrainian industrial enterprises using the methodology of the international consulting company Hay Group.

The issue of increasing wages at enterprises of the mining and metallurgical industry was discussed in detail at all levels, including with representatives of the Central Committee of the Trade Union of Metallurgists and Miners of Ukraine. In addition, for several months the management of ArcelorMittal Kryvyi Rih has been conducting intense negotiations with unions at the local level about possible variations in wage increases, taking into account their proposals. However, through no fault of the enterprise, the negotiation process was obviously delayed, which postponed the increase in salaries for an indefinite period. Taking into account the interests of the employees, immediately after the payment of the 13th salary in full, the company's management decided to raise the salary.

- I sincerely thank all the employees of ArcelorMittal Kryvyi Rih, - with our inherent steel endurance, we managed to overcome the tests of the most difficult year in the history of the industry in 2020. In a pandemic, we have maintained stable production, and most importantly, our entire team and social obligations. But, unfortunately, since the beginning of 2021, ArcelorMittal Kryvyi Rih has faced a number of new challenges. So, for the third month already, the company has been waiting for permits from the Ministry of Environmental Protection and Natural Resources of Ukraine. The sinter shop of metallurgical production is currently idle. A downtime sintering plant negatively affects the overall level of production. This may also entail a further shutdown of production facilities in all redistributions with corresponding consequences for a significant part of the personnel. The situation is getting worse every day. Nevertheless, we still hope for an optimistic scenario for the development of events, which will ensure an increase in the well-being of our people and the successful operation of ArcelorMittal Kryvyi Rih in the future.

Last week, employees of the enterprise received the so-called 13th salary - remuneration based on the results of work for the previous year, which is determined based on the size of the average earnings for the actual hours worked. This year, ArcelorMittal Kryvyi Rih allocated about UAH 415 million to pay the 13th salary. In 2020, the average salary at ArcelorMittal Kryvyi Rih increased by 5.5% and amounted to UAH 19,062. This is 24% higher than the average wage in Ukraine and 10% higher than in ferrous metallurgy. At the end of last year, the level of salaries at ferrous metallurgy enterprises (UAH 17.3 thousand) traditionally significantly exceeded the average in Ukraine (UAH 11.5 thousand).

Recommended:
Rinat Akhmetov's engineering company Corum Group sent a delegation to India
The structures of the Russian billionaire Mordashov blocked the payment of dividends at Turboatom
Nikopol pipe plant "Centravis" is approved as a supplier of the Chinese corporation Sinopec
On this topic
ArcelorMittal Kryvyi Rih will pay additional remuneration to its workers
Uranium problems: Ukraine may lose its own production
In March, wages at the enterprises of ferrous metallurgy of Ukraine increased by 22%
ArcelorMittal Kryvyi Rih will pay the 13th salary on March 13
Wages of highly skilled machinists NKMZ has exceeded 50 thousand hryvnia
The Independent Trade Union of Miners of Ukraine decided to prepare for an all-Ukrainian protest
Add a comment
Сomments (0)
News Analytics
Volodymyr Zelenskyy signed a law to extend the export duty on ferrous scrap16-05-2021, 09:29
China's Tianwen 1 spacecraft successfully landed on Mars15-05-2021, 12:56
British law enforcement officials accused Liberty Steel and GFG Alliance of15-05-2021, 12:03
Chip shortage will cost the global auto industry $ 110 billion in revenue in14-05-2021, 12:15
Zaporizhzhya Dneprospetsstal expands international partnership14-05-2021, 11:17
The current state of the market is ideal for the sale of rolled steel - IREPAS04-05-2021, 18:41
Global hydrogen demand to grow 7-fold by 2070 - PwC21-04-2021, 12:31
World Steel Association predicts a good year for metallurgists15-04-2021, 18:19
World Steel Association defines green steel and its variations12-04-2021, 13:14
China unlikely to cut steel capacity in 2021 due to high steel prices07-04-2021, 12:11
Sign in with: