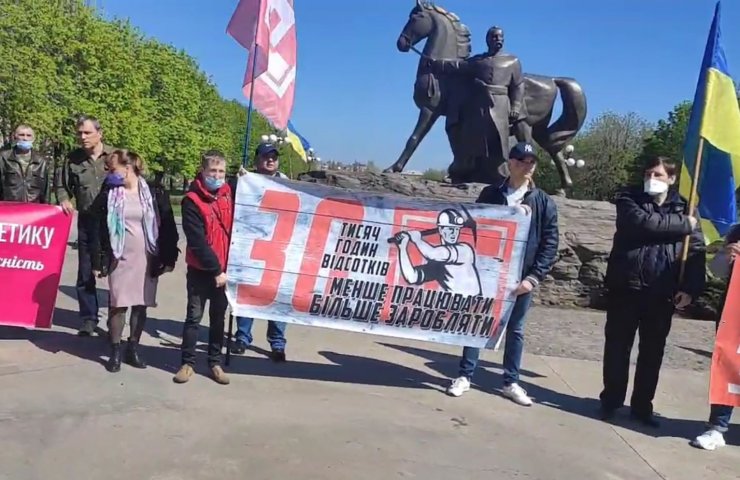 On May 1, residents of Krivoy Rog took part in a protest. Employees of metallurgical and mining enterprises blocked traffic in the city center.

Several dozen protesters march from the side of Metallurgov Avenue to 95 and 96 blocks (along Gagarin Avenue).

Recall that employees of ArcelorMittal Kryvyi Rih demand a 30% increase in wages, while the administration of the enterprise has increased official salaries by 5% since May 1.

“Participants of the protest action are extremely outraged by the lack of action by the company's management to resolve the requirements of labor collectives, primarily with inadequate wages and working conditions of employees of PJSC ArcelorMittal Kryvyi Rih, PE " Stol Servis "and LLC " Foundry and Mechanical Plant " ", - said the union.

The latest protest action by ArcelorMittal Kryvyi Rih workers took place on April 29, this is the third protest in the past two months.

Финансовая аналитика, прогнозы цен на сталь, железную руду, уголь и другие сырьевые товары. More news and analytics on Metallurgprom telegram channel - subscribe to get up-to-date market information and price forecasts faster than others.
Сomments
Add a comment
Сomments (0)
On this topic
"Naftogaz" has filed a lawsuit against the government of Ukraine for the issuance of a
Biden's Production Plan Requires Significant Increase in U.S. Mineral Production
Tesla will recall more than 10,000 cars with defective roof and steering wheel
Metinvest is recognized as one of the most sustainable companies in Ukraine
Ukrainian industrialists to talk about the benefits of Industry 4.0 at Trans4mation week online
Vodafone, DTEK and Ericsson announce the start of the Smart Factory project based on 5G
Recommended:
The state will not support the export of metals from Russia - Ministry of Industry and Trade of the Russian Federation
The abolition of export duty in India may reduce the price of Turkish steel
Australia and the UK aim to catch up and overtake China in the battery metal sector
News Analytics
China's iron ore output to rise in 2023 as new projects are launched30-11-2022, 18:10
"Centravis" agreed to supply a new batch of seamless pipes to a30-11-2022, 16:51
Metinvest enterprises in Ukraine resumed work after massive shelling of29-11-2022, 11:59
The European Council added the violation of restrictive measures (sanctions) to28-11-2022, 14:22
The abolition of export duty in India may reduce the price of Turkish steel28-11-2022, 14:07
Commodity prices will fall, metals quotes will rise slightly - Focus Economics28-11-2022, 13:28
Platinum market to face shortage next year - WPIC22-11-2022, 18:25
Global steel demand falls and will fall by 2.3% in 2022: WorldSteel19-10-2022, 23:12
Iron ore prices fall to 11-month low15-10-2022, 10:36
China production cuts in winter will give limited boost to steel markets -15-09-2022, 10:09
Sign in with: