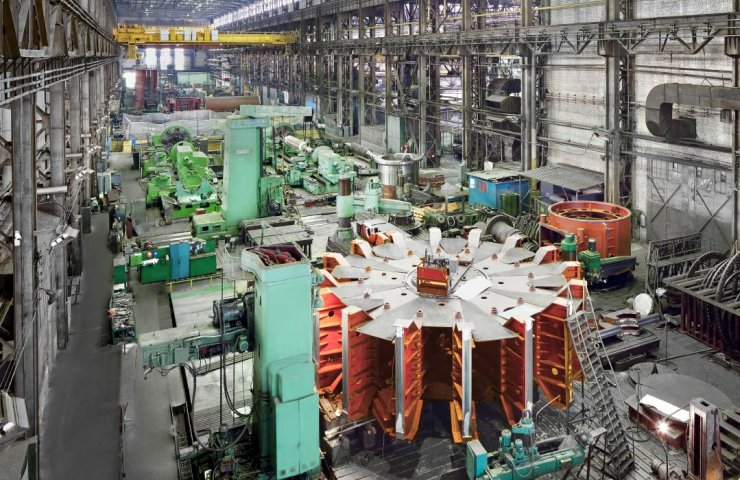 The plant will overhaul the backup armature of the DC motor PBK380 /125-4.1 UHL4 used in the mine hoist of ore. A contract was also signed for the supply of spare parts for the specified electric motor and the PBK380 /65-1.56 UHL4 electric motor, which will be shipped to the customer together with the repaired anchor.

“The reserve anchor has already been delivered to the plant, the winding and collector will be replaced there, and the laminated armature core will be re-wired with newly made radial and tangential wedges. The company's specialists will conduct supervision during the installation of equipment and commissioning. The task of the staff of the plant is to carry out all the work at a high technical level ”, - said the acting director. Victor Busko, General Director of the State Enterprise "Plant" Electrotyazhmash ".

Elektrotyazhmash supplied ZZhRK over 50 years ago with six unique motors for electric drives of mine hoisting machines: three PBK380 /125-4.1 UHL4 units and the same number of PBK380 /65-1.56 UHL4 units. All engines produced by ETM are still in operation at the plant.

Recommended:
Crypto miners stop business in China: bitcoin dipped to 36 thousand dollars
The carbon tax on imported steel in the European Union will begin to be levied in 2023
Interpipe sold 4.5 thousand tons of pipe metal products to Naftogaz for UAH 268.9 million
On this topic
Electrotyazhmash will take part in the program of renewal of power plants in Iraq for American money
The Swedish company repaired a mine loader of the Zaporizhzhya Iron Ore Plant
Yuzhmash told whether it is possible to launch reusable rockets from the Black Sea
Corum signed a contract with Zaporozhye iron-ore plant in the framework of the unique project
At the plant "Energomashspetsstal" was accepted shell of the reactor vessel for Tianwan NPP
Experts confirmed the high level of environmental safety of the pond-evaporator plant in utlyukskom
Add a comment
Сomments (0)
News Analytics
Demand for scrap metal in Ukraine exceeds supply by 5%19-06-2021, 11:45
Ukraine resumed sea purchases of gasoline due to restrictions on supplies from19-06-2021, 11:38
Installation of the first mine hoisting machine of Uralmashzavod began in Altai19-06-2021, 11:46
European designers have learned to inflate steel structures that could be a18-06-2021, 17:42
In Ukraine, police were accused of involvement in the theft of coal from trains18-06-2021, 17:51
Vaccinations fuel demand for platinum - World Platinum Investment Council08-06-2021, 12:55
Sharp price growth continues in the rolled metal market - Ukrpromvneshexpertiza08-06-2021, 11:04
Analysts note overheating of the global scrap metal market01-06-2021, 13:28
Hydrogen-fueled steelmaking could be competitive after 2050 - McKinsey19-05-2021, 14:22
Steel raw material prices are skyrocketing across the board18-05-2021, 12:34
Sign in with: