Ukraine and Great Britain agreed on the joint construction of warships

The Secretary of State for Defense Procurement of the United Kingdom and the Deputy Secretary of Defense of Ukraine signed a memorandum on the implementation of maritime partnership projects. 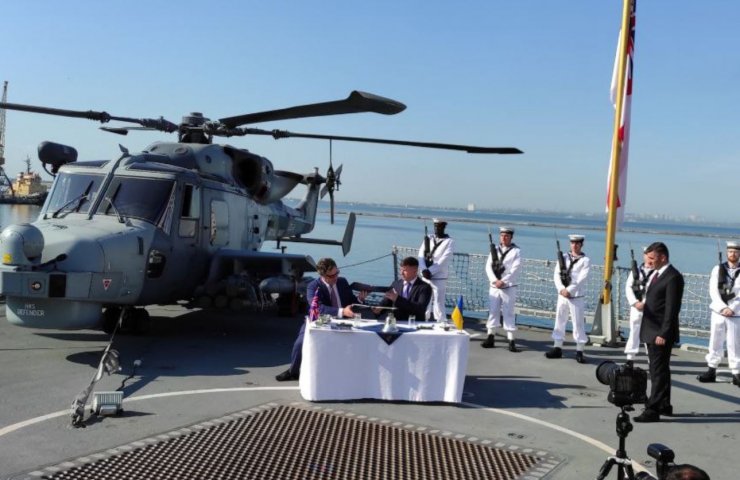 "This is another step in the development of bilateral cooperation between Ukraine and the United Kingdom to strengthen the Ukrainian fleet, which faces constant danger in the Black and Azov Seas," the Ministry of Defense of Ukraine noted.

The destroyer HMS DEFENDER arrived in Odessa last Friday. This is the second Royal Navy ship to visit Odessa in the past few weeks, after HMS TRENT.

In June, President of Ukraine Volodymyr Zelenskyy said that Ukraine needs help and must immediately resolve the issue of joining NATO. He later said that if the West does not help Kiev with Donbass, then the Ukrainian army will have to become "the most powerful in terms of equipment and troops in Europe."

Финансовая аналитика, прогнозы цен на сталь, железную руду, уголь и другие сырьевые товары. More news and analytics on Metallurgprom telegram channel - subscribe to get up-to-date market information and price forecasts faster than others.
Сomments
Add a comment
Сomments (0)
On this topic
The pensioner admitted that for 32 years she falsified the results of steel tests for US submarines
"Naftogaz" has filed a lawsuit against the government of Ukraine for the issuance of a
At the Kherson shipyard SMG started cutting metal for the fourth tanker
Ukrainian-made gas equipment for the export of hydrogen to Europe is being tested in Ivano-Frankivsk
Spikes in prices for scrap on the world market is a temporary phenomenon - expert opinion
The Brits are terribly worried about the possible sale Britih Steel Chinese
Recommended:
Europe's passenger car market records its worst year since the turn of the century
Interpipe reduced steel production and sharply reduced capital investment
Dneprovsky Metallurgical Plant continues to operate rolling shops using tolling raw materials
News Analytics
European steel price rise that began in January will be short-lived - MEPS26-01-2023, 14:44
Steel production in China rose in the first decade of January26-01-2023, 12:30
UK is ready to give 300 million pounds to save British Steel20-01-2023, 21:31
Carriage building plant in Kremenchug stopped production due to debts20-01-2023, 21:11
Europe's passenger car market records its worst year since the turn of the20-01-2023, 21:03
S&P: Russia will continue to dominate the steel export market in the Black05-01-2023, 11:22
Fitch Analysts Predict Big Drop in Global Steel Consumption This Year14-12-2022, 13:59
Analysts predict 5% annual growth in the iron casting market through 203006-12-2022, 12:44
Commodity prices will fall, metals quotes will rise slightly - Focus Economics28-11-2022, 13:28
Platinum market to face shortage next year - WPIC22-11-2022, 18:25
Sign in with: