To fit the transformer into a sea container, the company performed several optimization calculations of the reactors in order to reach the dimensions and weight required for this type of loading. 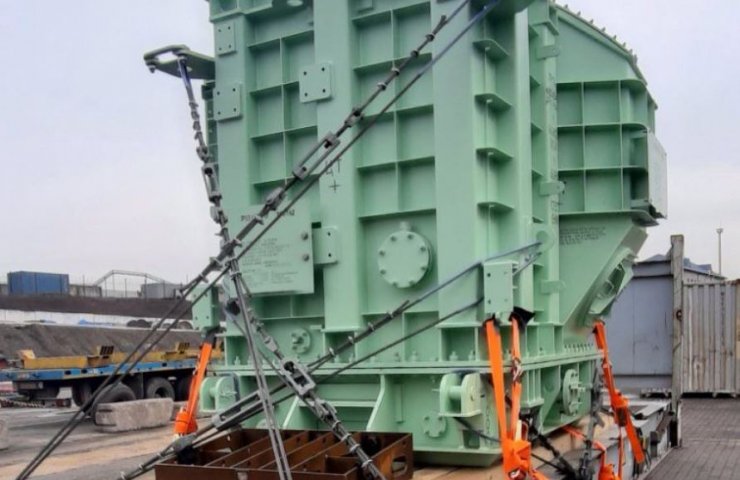 At the machine-building enterprise "Zaporozhtransformator" for the first time they used the scheme of shipment of equipment by container lines. The pilot project was the shipment of three POM-55125/525-T1 reactors to Argentina. The use of such shipment became possible due to the small overall dimensions of the ordered equipment. And this made it possible to reduce transport costs for this project by more than two times compared to traditional shipment in the hold of a ship.

If we talk about large transformers ordered for the countries of the Far Abroad, then usually the shipment was carried out in such a way that the transformer or reactor is loaded into the hold of the ship, and dismantled units in a box are located nearby. For small transformers, in particular for reactors for Argentina with a transport weight of about 33 tons, it is possible to place them in special open-type flat rack containers. All dismantled units in box packaging are also placed in containers, but of a closed type. For this, the design department of PJSC "Zaporozhtransformator" has adjusted the packaging for dismantling so that it can compactly fit into the container.

“When preparing the technical and commercial proposal, two options for shipment were proposed: regular (in the hold of the ship) and container. In the course of calculations, it became obvious that the second type is much cheaper than the first. Our task was to design (or adjust the dimensions) the reactor so that it would fit into the container in terms of overall dimensions, and its mass did not exceed the permissible load capacity. Several optimization calculations of the reactors were carried out in order to reach the dimensions and weight required for this type of loading, - said Alexander Pitomets, chief designer for metal structures and components of Zaporozhtransformator PJSC.

Three 40ft High Cube Flat Rack and eight 40ft containers were used to load three reactors. The physical work on loading the equipment was carried out by the cargo stuffing department of the Yuzhny port, Odessa. Loading of reactors is realized with a crane. The release was done using steel ropes with turnbuckles and synthetic lashing straps in total 12 points of release with steel ropes with lanyards and 8 points with synthetic lashing straps. Dismantling loading is carried out using a crane and heavy-duty forklift trucks capable of driving into the inside of the container. Unfastening is done using synthetic tie-down straps and a wedge made of wooden beams.

Thus, the scheme of shipment of equipment by container lines gets the right for practical application and is beneficial for the plant due to a significant reduction in the cost of transporting goods to the Far Abroad. This, in turn, increases the competitiveness of the enterprise and makes it possible to participate in tenders on other continents along with local manufacturers.

Финансовая аналитика, прогнозы цен на сталь, железную руду, уголь и другие сырьевые товары. More news and analytics on Metallurgprom telegram channel - subscribe to get up-to-date market information and price forecasts faster than others.
Сomments
Add a comment
Сomments (0)
On this topic
Energy agencies of Ukraine and Germany have identified cooperation priorities
"Metinvest " with affiliated companies became the owner of 100% of "Zaporozhogneupor
Elon Musk contracted coronavirus, but doubts the reliability of the tests
Zaporozhtransformator resumes deliveries to Argentina
Yuzhmash signed a memorandum of cooperation with the Saudi company National Building &
Ukrainian industrialists to talk about the benefits of Industry 4.0 at Trans4mation week online
Recommended:
Coal production in China increased by 11% in January-August
Ukraine may resume coal exports to Poland
Naftogaz launches new arbitration against Gazprom
News Analytics
British Steel owner asks government for financial support05-10-2022, 13:05
The price of gold crossed the mark of 1700 dollars05-10-2022, 13:28
US coal prices top $20004-10-2022, 10:16
Tata Steel merger plan to secure long-term profits03-10-2022, 10:46
US hydrogen prices to drop to zero dollars per kg in 5 to 6 years: Platts02-10-2022, 21:53
China production cuts in winter will give limited boost to steel markets -15-09-2022, 10:09
Steel prices may rise as manufacturers stop production11-09-2022, 14:06
IREPAS: The global long products market is in a "dramatic situation"10-09-2022, 20:49
Steel prices are unlikely to rise significantly in the near future - analysts02-09-2022, 22:58
Steel prices may move up on new data from China31-08-2022, 12:19
Sign in with: