Plant named after V.A. Malysheva received an advance from Pakistan for the modernization of a batch of T-80UD tanks

Advance payment is 30% of the order, most of the amount will be received by the plant. Malysheva, the rest - other involved enterprises. 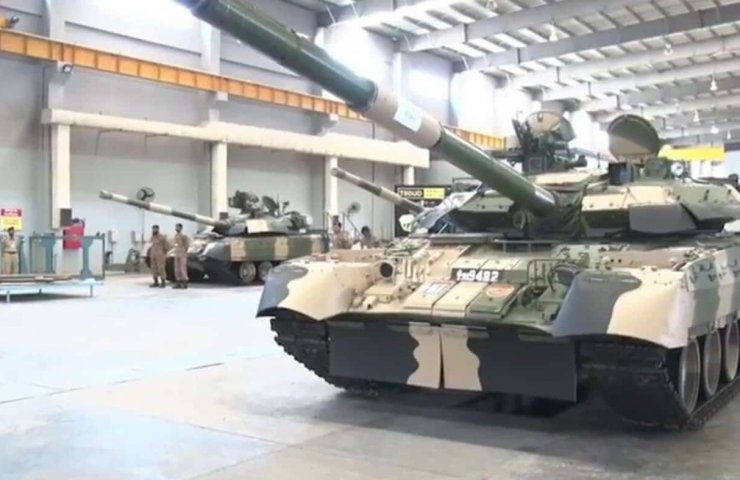 Plant named after V.A. Malyshev, which is part of the state concern "Ukroboronprom", fulfills contracts on time - both for the Ukrainian customer and for the foreign one. The general director of the enterprise Vasily Krylas stated that there were no grounds for disrupting the fulfillment of contracts.

Thanks to the implementation of foreign economic contracts, the enterprise managed to eliminate the accumulated wage arrears, and the beginning of work on the Pakistani contract for the modernization of a batch of T-80UD tanks will allow reaching a stable payment schedule, the company noted.

Director of the Plant. V.A. Malysheva told reporters that the state-owned company Ukrspetsexport has confirmed that money for the modernization of Pakistani tanks has already entered Ukraine.

“We are expecting them at the enterprise the other day. But we have already begun work on the order ... This includes design and technological documentation, working out the norms, preparing materials, applications for procurement. This work has been going on for a month and a half, ”Krylas said.

Recall that at the end of February, Ukroboronprom announced the signing of a contract with Pakistan for a total of $ 85.6 million. The combat vehicles of this model manufactured in Kharkov were purchased by the Islamic Republic in the second half of the 90s and are considered obsolete by modern standards.

“As of today, there are no grounds for disruption by the V.A. Malysheva fulfillment of contracts. The company really later began to fulfill orders for the production of the Oplot tank and the modernization of 10 T-64 hulls involved in the parade on the thirtieth anniversary of Ukraine's independence, due to funding delays. However, today, thanks to the help of partner enterprises - participants of the Ukroboronprom Group of Companies, 18 additional specialists have been additionally involved in the fulfillment of this order. People work in two shifts, and if necessary, they are ready in three shifts. Thus, there are no grounds for disrupting the fulfillment of the contract, because the enterprise is working on its implementation in an enhanced mode, "- said Vasily Krylas.

The press service of the plant said that the process of minimizing losses continues: in 2019, the enterprise's loss amounted to 420 million hryvnia, in 2020 - already 112 million hryvnia. By the end of the current year, the plant plans to obtain a positive financial result.

Earlier it was reported that the total accounts payable accumulated over the past 9 years at the V.A. Malyshev, as of January 1, 2021, it amounted to UAH 1.8 billion.

Финансовая аналитика, прогнозы цен на сталь, железную руду, уголь и другие сырьевые товары. More news and analytics on Metallurgprom telegram channel - subscribe to get up-to-date market information and price forecasts faster than others.
Сomments
Add a comment
Сomments (0)
On this topic
How the reform of the electricity market in Ukraine can lead to a collapse and what to do about it
Ukroboronprom and Ukrspetsexport signed a cooperation agreement with EDGE Group
Yuzhmash told whether it is possible to launch reusable rockets from the Black Sea
Ukroboronprom confirmed the intentions of Antonov State Enterprise to start production of aircraft
"Ukroboronprom" introduces to "Antonov" Supervisory Board
Ukroboronprom approved a roadmap for overcoming the crisis of Kharkiv Aviation Plant
Recommended:
For 8 months of 2022, steel production in Ukraine fell by 64.5%, to 5.2 million tons
Turkey in January-July increased imports of pig iron by 46.7%, tripling purchases in Russia
Tata Steel merger plan to secure long-term profits
News Analytics
British Steel owner asks government for financial support05-10-2022, 13:05
The price of gold crossed the mark of 1700 dollars05-10-2022, 13:28
US coal prices top $20004-10-2022, 10:16
Tata Steel merger plan to secure long-term profits03-10-2022, 10:46
US hydrogen prices to drop to zero dollars per kg in 5 to 6 years: Platts02-10-2022, 21:53
China production cuts in winter will give limited boost to steel markets -15-09-2022, 10:09
Steel prices may rise as manufacturers stop production11-09-2022, 14:06
IREPAS: The global long products market is in a "dramatic situation"10-09-2022, 20:49
Steel prices are unlikely to rise significantly in the near future - analysts02-09-2022, 22:58
Steel prices may move up on new data from China31-08-2022, 12:19
Sign in with: