NJSC Naftogaz of Ukraine and the German gas distribution company RWE Supply & Trading have agreed to cooperate in the development of hydrogen projects and the supply of ammonia to Germany. 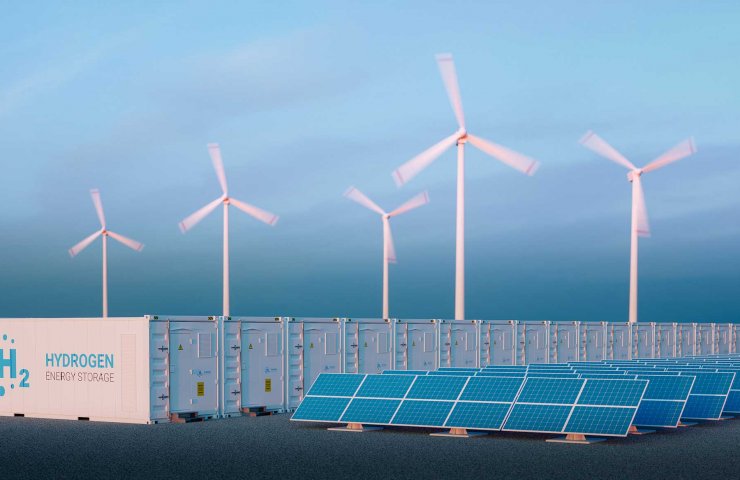 NJSC Naftogaz Ukrainy and the German gas trader RWE Supply & Trading on the day of the visit of German Chancellor Angela Merkel to Kiev agreed to cooperate in the development of hydrogen projects. The heads of the companies on Sunday, August 22, signed a corresponding memorandum of understanding, Naftogaz reported.

Both companies agreed to analyze the possibilities of mutually beneficial cooperation to create a complete value chain for "green" hydrogen and its derivatives, such as ammonia, which are produced in Ukraine. In particular, we are talking about the development of projects for the production and storage of green hydrogen and ammonia in Ukraine and their import to Germany. The working groups of the two companies will start working together next month.

“Ukraine has great potential for the development of a hydrogen economy in cooperation with Germany. And Naftogaz as a national company is ready to become a support for this development. We consider green hydrogen to be a strategic priority, and we are pleased to work on this together with RWE, our reliable partner in the trade and supply of natural gas, ”commented Yuriy Vitrenko, Chairman of the Management Board of Naftogaz.

Ulf Kerstin, Board Member of RWE Supply & Trading, commented: “Hydrogen will play a key role in decarbonizing the industry as not everything can be electrified with renewable energy. As an industry partner, RWE is part of this solution. We are very pleased that together with Naftogaz we are exploring the possibilities for future supplies of green hydrogen from Ukraine. ”

The possibility of Ukraine's export of hydrogen to the EU countries, in particular to Germany, is being discussed in connection with the fact that Russia plans to launch the Nord Stream-2 gas pipeline already this year, which will allow Gazprom to completely abandon the use of the Ukrainian gas transmission system and supply gas to the EU countries bypassing Ukraine.

Director of the Ukrainian gas transmission system operator Serhiy Makogon said that Ukraine could become a supplier of hydrogen to the European Union, but so far such a possibility is only being studied and it is impossible to start pumping hydrogen through the gas transportation system of Ukraine in the next two or three years. "Hydrogen is the future, but it is not the future of the next two or three years, when we should think about transit, because we have transit only until the end of 2024," he explained.

Recall that cooperation between Ukraine and Germany on the supply of "green" hydrogen was agreed between President of Ukraine Volodymyr Zelenskyy and German Chancellor Angela Merkel during the last meeting in Berlin in July this year.

Финансовая аналитика, прогнозы цен на сталь, железную руду, уголь и другие сырьевые товары. More news and analytics on Metallurgprom telegram channel - subscribe to get up-to-date market information and price forecasts faster than others.
Сomments
Add a comment
Сomments (0)
On this topic
A pilot project for storing hydrogen in underground gas storages starts in the Luhansk region of
The refusal of Merkel to attend the summit of G-7 may be associated with the "Northern
The German utility will help Thyssenkrupp to switch to hydrogen in steelmaking
Merkel will not be able to refuse to implement the project "Nord Stream 2" - Bloomberg
In Germany, outraged by the budget financing of the purchase of toxic gases
"Naftogaz of Ukraine" in February reduced the price of gas for industry by 15%
Recommended:
War in Ukraine to accelerate world economy transition to clean energy - BP
Ukraine arrested Russian metallurgical assets
UK is ready to give 300 million pounds to save British Steel
News Analytics
EU Green Deal should encourage investment in mild steel projects: Eurofer02-02-2023, 16:32
Belarusian steel plant to operate at full capacity from February02-02-2023, 16:56
British Steel considers cutting up to 1,200 jobs at Scunthorpe02-02-2023, 11:50
Electric vehicles will play a key role in US aluminum production growth - Norsk01-02-2023, 12:17
The former president of Motor Sich was accused of aiding terrorists01-02-2023, 11:39
European stainless steel producers ready to raise prices31-01-2023, 16:16
S&P: Russia will continue to dominate the steel export market in the Black05-01-2023, 11:22
Fitch Analysts Predict Big Drop in Global Steel Consumption This Year14-12-2022, 13:59
Analysts predict 5% annual growth in the iron casting market through 203006-12-2022, 12:44
Commodity prices will fall, metals quotes will rise slightly - Focus Economics28-11-2022, 13:28
Sign in with: