During the execution of the contract, the shipyard specialists used about 900 tons of metal produced by the Metinvest holding for the manufacture of structures. 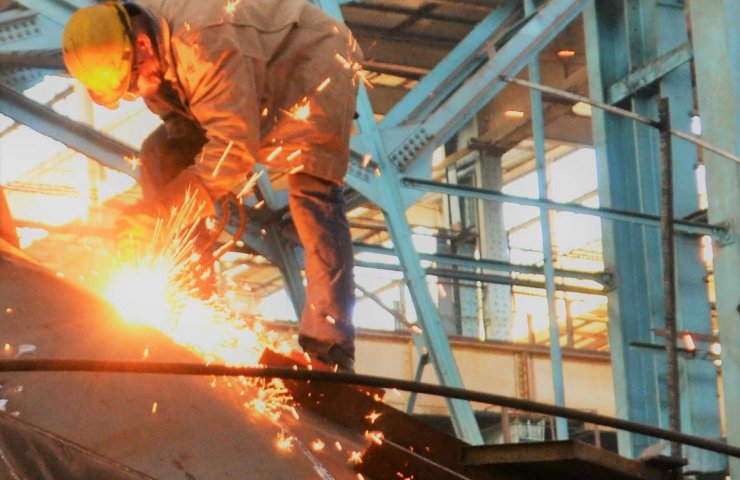 Specialists of the Kherson shipyard Smart Maritime Group completed the modernization of a series of dry-cargo ships-fires belonging to Eems Werken B.V. (Netherlands).

In the course of modernization, the length of each vessel was increased by 12 m due to the installation of an insert and an inter-hold bulkhead, which significantly improved the technical and economic characteristics of the vessels - they became 2-hold vessels (before the project was implemented, 1 hold), and the deadweight increased by an average 20%.

During the execution of the contract, the shipyard specialists used about 900 tons of metal produced by the Metinvest holding for the manufacture of structures.

Ballast tanks, outer skin and cargo holds were also painted. More than 36 tons of paint have been used for this purpose. And the total area of ​​processed metal surfaces was more than 10 hectares. In addition, new piping systems were laid on the ships, new hatch covers were installed, devices for dropping free-fall boats and sets of CO2 fire extinguishing systems were installed.

Dmitry Krasnikov, CEO of Smart Maritime Group, noted that the customer is satisfied with the quality and punctuality of the work performed.

“Another successfully implemented project has confirmed the high professionalism of our specialists. We will continue to actively develop cooperation with the Netherlands and other foreign partners. Negotiations will take place in the near future, and we expect to sign a new contract for the modernization of several more motor ships, ”said Dmitry Krasnikov.

Smart Maritime Group is the largest shipbuilding company in Ukraine, which unites the shipbuilding assets of Smart Holding: Nikolaev and Kherson shipyards. The production capacities of the enterprise allow building medium-tonnage full-set ships and performing complex ship repair works. The shipyards are ordered by companies from the Netherlands, Norway, Great Britain and other countries of the world.

Финансовая аналитика, прогнозы цен на сталь, железную руду, уголь и другие сырьевые товары. More news and analytics on Metallurgprom telegram channel - subscribe to get up-to-date market information and price forecasts faster than others.
Сomments
Add a comment
Сomments (0)
On this topic
Kherson shipyard accepted for modernization two dry cargo vessels of the Dutch EEMS Werken
Ukrainian SMG will lengthen 6 Dutch ships by 12 meters
Smart Maritime Group launched 4 tanker for the Dutch VEKA Group
At the Kherson shipyard, the dry cargo ship was lengthened by 25 meters, increasing the volume of
Smart Maritime Group, has launched the third tanker for Dutch VEKA Shipbuilding
Kherson shipyard is upgrading the cargo vessel "Gelius 1" with the increase of its
Recommended:
UK unions cancel all planned strikes after Queen's death
China production cuts in winter will give limited boost to steel markets - Platts
UK government to set up Critical Minerals Agency
News Analytics
Tata Steel merger plan to secure long-term profits03-10-2022, 10:46
US hydrogen prices to drop to zero dollars per kg in 5 to 6 years: Platts02-10-2022, 21:53
The production of passenger cars in Russia decreased by 2.8 times in eight29-09-2022, 11:19
Donetsk and Torez electrotechnical plants will start producing electrical29-09-2022, 11:37
Ukrainian coking plants reduced gross coke production by 55.2%29-09-2022, 11:28
China production cuts in winter will give limited boost to steel markets -15-09-2022, 10:09
Steel prices may rise as manufacturers stop production11-09-2022, 14:06
IREPAS: The global long products market is in a "dramatic situation"10-09-2022, 20:49
Steel prices are unlikely to rise significantly in the near future - analysts02-09-2022, 22:58
Steel prices may move up on new data from China31-08-2022, 12:19
Sign in with: